The Alaska solitaire game is a variation of Yukon. It’s slightly easier to learn than Russian solitaire, but still requires a high level of skill and strategy to win — not to mention a little bit of luck.

But what makes Alaska different? Well, unlike other Yukon types,when playing Alaska, you can build ranks in either descending or ascending order, whereas other variants require a strict descending order.

If you've played any type of Yukon solitaire before, you’ll also know there’s no stock or waste pile - you’re relying on your tableau piles. 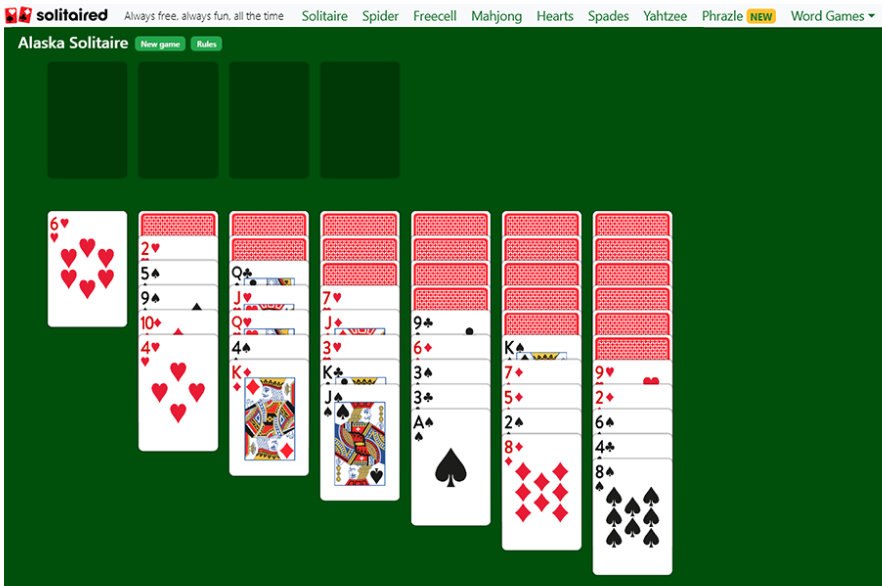 How to Play Alaska Solitaire

When starting a new game of Alaska solitaire starts, you’ll deal your playing cards into 7 tableau piles in the following arrangement: 1 in the first pile, 2 in the second pile, etc. The top card of each pile is flipped face-up. Then every pile except the first is dealt an additional 4 face-up cards. The first card is its own tableau.

If starting a new game, make sure to shuffle the cards before dealing. But if you’re playing Alaska solitaire online, then this will be done for you (alongside the rest of the setup).

You then have four empty foundation piles - these will be built up once the game has started. Each of these piles must start aces up - so start revealing those tableau cards early in your game! 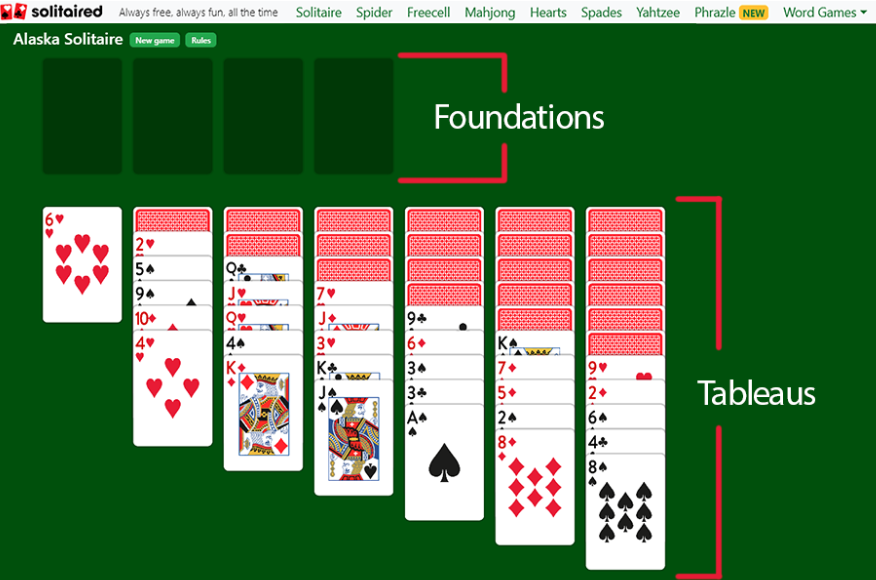 The object of Alaska solitaire is to build up each suit in the foundation pile from ace to King, using all 52 cards in the deck.

You have a total of four suits (each foundation pile) to build up, using all cards from the tableau piles.

It may sound easy, and the concept is actually rather straightforward, but with no stock or waste pile, it’s more difficult than you may think. More challenging than Freecell? You decide!

Whether you’re playing solitaire on Android, iPhone, on your computer, or on with a deck of cards, there are a few rules you need that separate Alaska from other solitaire card games.

The rules are as follows:

What is a good strategy for Alaska Solitaire?

Developing a good strategy for Alaska Solitaire not only increases your odds of winning your next game, but also makes the Yukon variant much more enjoyable.

And while it’s impossible to win every game, you can win more games with the right strategy.

Uncover as many face down cards as quickly as possible

Similar to other variations of Yukon solitaire, aim to uncover as many face down cards as quickly as possible.

Only face up cards are in play - use your first few moves to reveal cards to get your game started on the right foot.

Use aces as soon as they become available

Aces begin all foundation piles. So, you must use these once they become available.

This sets up more moves, allowing you to build in ascending order towards the King in suit in each pile.

If you don’t reveal these early and begin building the foundations, then you’ll miss out on a few moves.

Unless you’re trying to set a record, it’s best to remain patient when playing this version of solitaire.

The game is highly analytical - you need to think about your moves and not rush into any plays to increase your odds of winning. Because, let’s face it, going into the game, the odds are already stacked against you.

What are the odds of winning Alaska solitaire?

The odds of winning a game of Alaska solitaire are thought to be 1/10. That’s roughly one in ten games you can win. In comparison, you can win approximately one in three games playing Spider solitaire.

What’s the difference between Alaska solitaire and Russian solitaire?

Alaska solitaire is thought to have first appeared in Pretty Good Solitaire in 1996 thanks to a suggestion from a keen user. Since then, it’s been played and enjoyed by millions.

Yukon solitaire is more challenging than other variants, including Klondike, mainly as there is no stock or waste pile, and you must be extra patient to win a game.

What is the difference between Yukon and Klondike solitaire?

Klondike is one of the easier variants of solitaire — it’s easy to pick up and a great stepping stone to other variants. But what makes it different from Yukon variants?

In Klondike, cards can only be moved from a tableau column if they form a proper sequence.

Alternatively, Yukon allows you to move groups of cards from a tableau column if they are not packed in sequence - so long as they form a descending sequence and color, then you can make the move.

The goal of both games stays the same: build up four foundation piles in order from ace to King, all of which follow the same suit.

Interested in learning how to play solitaire? Check out our solitaire guides for more advice.