Yukon solitaire allows you to move groups of cards regardless of their order. This make it fundamentally different from Klondike, or “normal” solitaire. You’ll also note that Yukon solitaire doesn’t have a stock or waste pile — everything is on the table. 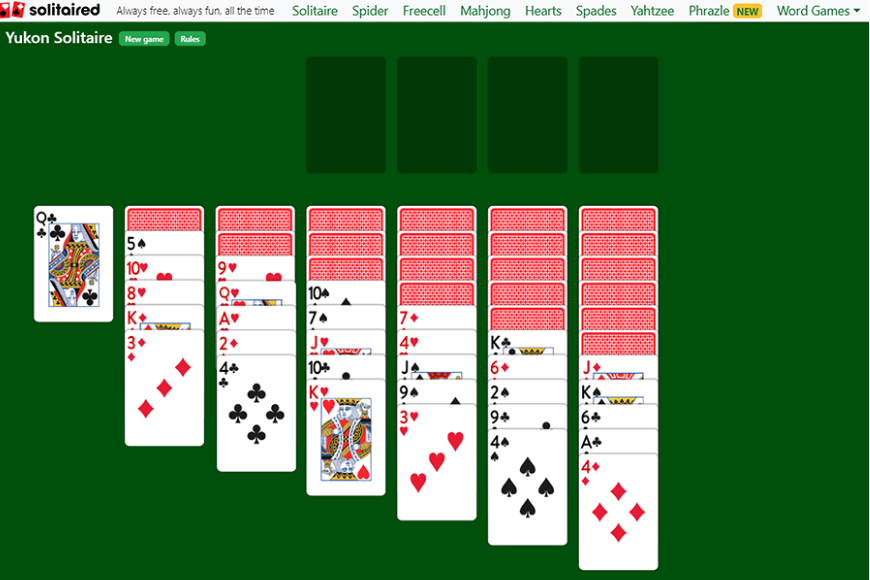 How to play Yukon Solitaire

Yukon solitaire starts out with 7 tableau piles in the following arrangement: 1 in the first pile, 2 in the second pile, etc. The top card of each pile is flipped face-up. Then every pile except the first is dealt an additional 4 face-up cards. The first card is its own tableau. 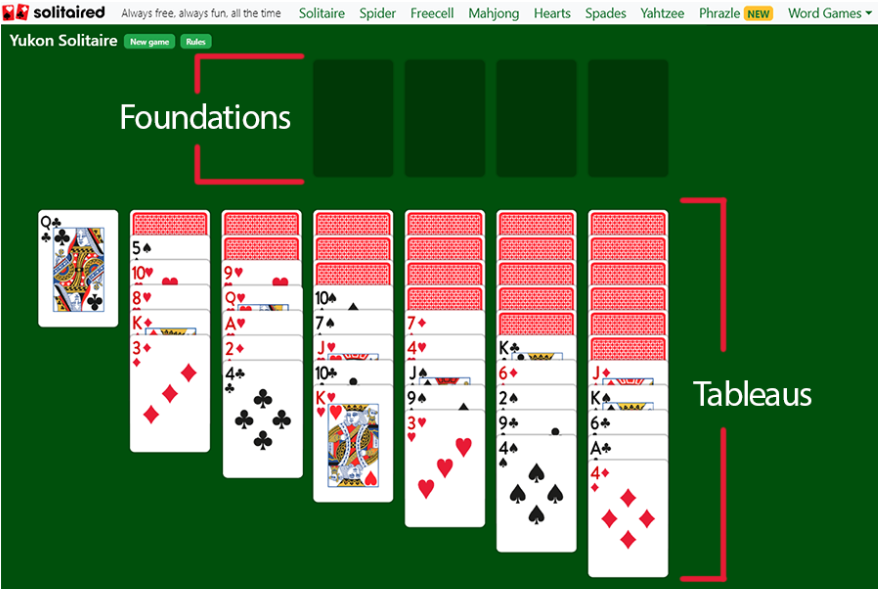 The goal of Yukon solitaire is to move all cards from the tableau into the 4 foundation piles, by suit, from ace to king.

Yukon plays much like regular Klondike solitaire, but with a few important alterations to gameplay.

E.g. if the top card of a tableau pile is a black queen, and another pile has a red jack, under a bunch of cards you can’t move yet, you can move the stack, starting with the red jack, onto the black queen.

This is the rule that sets all Yukon family versions of solitaire apart.

Going in with a strategy will both increase your odds of winning and make the game more enjoyable. Here are a few tips to get you started.

If Yukon is a new game variant for you, it may take some time to get used to how movement works. Look carefully at every card before making moves, not just the top cards. You just don’t want to miss any possibilities.

Use aces as soon as they become available.

Aces begin all foundation piles, so use these once they become available.

What is the difference between Yukon and Klondike solitaire?

Klondike is one of the easier variants of solitaire — it’s easy to pick up and a great stepping stone to other variants. But what makes it different from Yukon variants?

In Klondike, cards can only be moved from a tableau column if they form a proper sequence.

Alternatively, Yukon allows you to move groups of cards from a Tableau column if they are not packed in sequence - so long as they form a descending sequence and color, then you can make the move.

The goal of both games stays the same: build up four foundation piles in order from ace to King, all of which follow the same suit.

What are the odds of winning Yukon solitaire?

You should be able to win at least half the games of Yukon solitaire you play. This is based on the cards themselves and the game being actually winnable; we aren’t accounting for the time it will take you to get used to the rules and nail down your strategy. Give yourself time to learn!

How many types of Yukon solitaire are there?

There are hundreds of variations of Yukon solitaire.

Some of our favorites are Alaska, Queenie, and Scorpion solitaire.

Yukon solitaire is more challenging than other variants, including Klondike, mainly as there is no stock or waste pile, and you must be extra patient to win a game.

Interested in learning how to play solitaire? Check out our solitaire guides for more advice.