From classic games such as Lara Croft: Tomb Raider (1996) to more modern games like Bayonetta (2009), it appears very little has changed with the design of female characters.

While with solitaire games there are no characters outside of the royal suits,  we wanted to find out which character is the most popular and sexualized, and whether character design has changed over the years to avoid gender stereotypes. 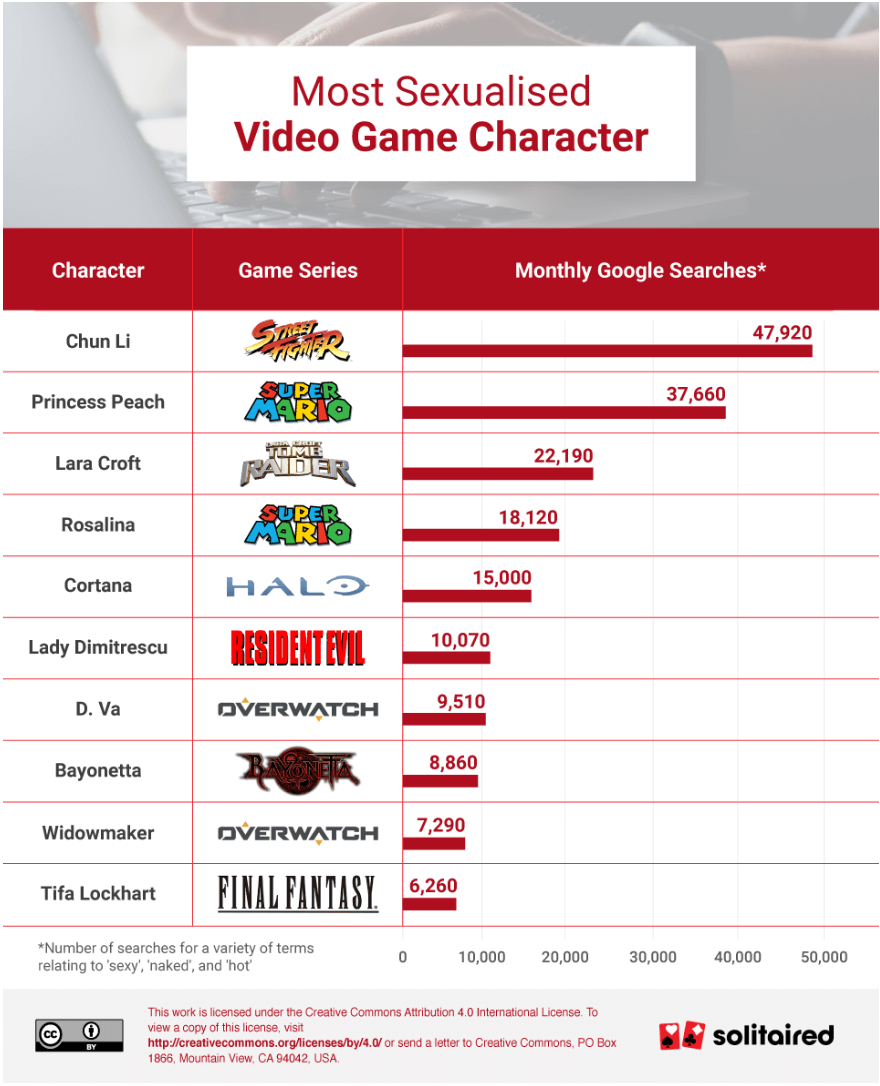 At the top of our list we have Chun Li from Street Fighter with 47,920 monthly searches, first seen in 1991, Chun Li has been in every Street Fighter. For her character design she is reasonably proportioned and has her chest covered, however, her traditional Chinese dress has exaggerated side slits, showing her thighs. This is one feature often exaggerated in fan art.

The third character on our list is Lara Croft from Lara Croft: Tomb Raider with 22,190 monthly searches. First appearing in 1996, Lara Croft’s original character design consisted of short shorts, a tight tank top and exaggerated assets. This is the same for almost all Lara Croft games, however, in more recent adaptations she has leggings on rather than hot pants.

Widowmaker’s design is more traditional, with large breasts and a tiny waist, she wears high heels and has a lot of skin on show. D Va. Is fully clothed, however, with her skintight suit there is little left to the imagination.

Lady Dimitrescu’s character design plays on the idea that she goes against most gender stereotypes that the other characters on our list play up to, such as being super tall. Dressed in a 1920s style dress with a large hat, Lady Dimitrescu is not your typical overly-sexualized female character.

From our research it appears the more sexualized characters are either scantily clad or play into damsel in distress stereotypes. With their male counterparts having more speaking lines and the most exciting scenes, there is still a long way to go before female characters will be less sexualized. Super Mario and Overwatch both had two characters in the top ten, Super Mario has Princess Peach and Rosalina in second and fourth, and Overwatch had D Va. and Widowmaker in seven and ninth.

Solitaired analyzed 100 of the top female characters using Google’s Keyword Planner. We searched for three terms per character relating to ‘sexy’, ‘naked’ and ‘hot’. These were then added together to create a combined number of monthly sexualized searches.