Yahtzee Strategies to Win the Game 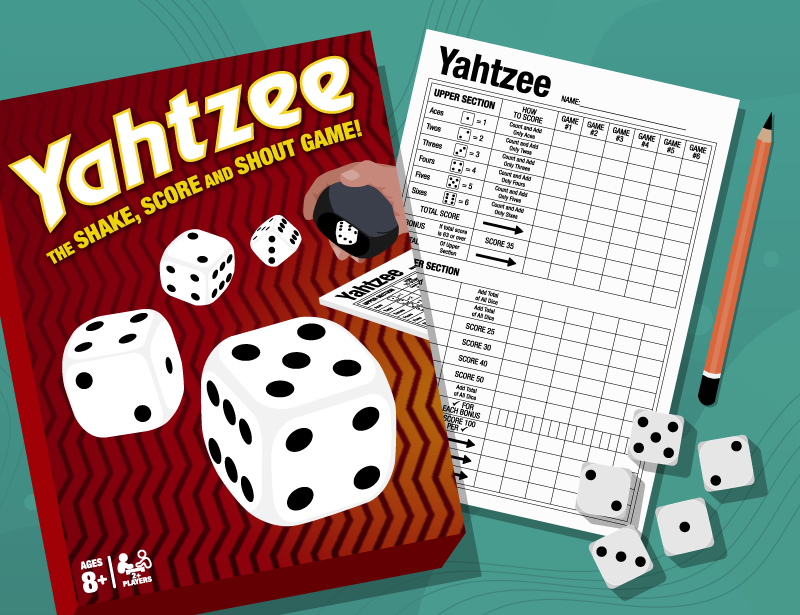 When playing Yahtzee, you aim to score the most points by rolling various combinations of five dice. While even the best strategy depends partially on luck, you can take advantage of various Yahtzee strategies to win the game.

In this guide, we explain how the Yahtzee scoring system works and the optimal strategies, tips, and tricks you can apply if you want to know how to win. Whether you play the classic, physical board game or play online in multiplayer environments, the following tips can help you level up your Yahtzee.

A game of Yahtzee consists of 13 rounds (or turns) where you and your opponent(s) try to score as many points as possible. Each Yahtzee player can roll the dice up to three times per round, but may also stop after the first roll or second roll. In addition, you can choose how many dice you want to use on each roll.

The Yahtzee score card has an Upper section and Lower section. During each round, you must fill out one of the 13 boxes provided for you. You can fill out any section in any order, but once you fill in a box, you cannot use it again for the rest of the game. If you can’t fill in a box, however, you have to place a zero in one, meaning you lose the opportunity to score in that box for the rest of the game.

Yahtzee is no different than a card game in terms of luck. You shuffle cards and draw from a deck in a card game, and you roll and reroll dice in Yahtzee. While this dice game depends on luck in terms of which dice land on the table, like any other game, making smart use of Yahtzee strategies can improve your chances of getting a high score. So these sections give you helpful hints for improving your average score when you play.

1. If you roll high numbers of Fours, Fives, or Sixes, use those points in the Upper section to increase your chances of reaching 63.

Remember, scoring at least 63 points in the Upper section earns you a 35-point bonus. Your Ones, Twos, and Threes don’t add up to much, but your Fours, Fives, and Sixes do. So if you roll several matching dice with a higher value, using those points in an Upper box can get you closer to 63 for a better chance at the Upper section bonus.

For example: Let’s say you roll (5, 5, 5, 1, 2). While you could place this score in a Lower box (3 of a kind), it may benefit you to place it in an Upper box (Fives). Although you will earn 15 points either way, placing the score in the Upper section gets you closer to the magic number 63.

2. Consider leaving your Ones and Twos boxes blank to zero them out if needed.

If you can’t (or don’t want to) fill in a box that corresponds to your roll, you must enter a zero in any box. You can use this Yahtzee rule to your advantage by applying it strategically. Because Ones and Twos don’t earn many points, you may want to zero them out when you have a bad roll of the dice. Since you wouldn’t score many points for either of these boxes (a maximum of only 5 to 10 points), this gives you the opportunity to roll a higher scoring hand later.

For example: You rolled (1, 1, 3, 5, 6). However, you’ve already filled in your Ones and Threes boxes. So instead of taking a low score of only 5 or 6 points, you can zero out the Twos box instead, leaving you the option to roll a higher number of Fives and Sixes later in the game.

3. Zero out the Yahtzee box toward the end of the game

Yahtzee is worth 50 points, the highest scoring combination in the game. Since the probability of rolling a Yahtzee lowers as the game progresses, you may want to zero it out in the late stages of the game to allow you to score more points in another turn.

For example: You only have the Fives, 3 of a kind, and Yahtzee boxes open on your scorecard. You have a higher probability of scoring points in the Fives and 3 of a kind boxes on another turn, so you choose to zero out the Yahtzee at the end of this turn.

For 3 of a kind and 4 of a kind, you add together all of the dice to get your score, but if you’ve rolled several Ones or Twos, these add up to a lower score than rolling Fours or Fives. The more ones and twos you have, the lower your total score.

5. Review your Upper and Lower sections carefully to see where you can score the most points

Avoid focusing too much on one section or box. Instead survey the whole scorecard to see what will earn you the most points. As a general rule, balancing the Upper and Lower sections will give you the highest score.

For example: If you happen to roll a (3, 3, 3, 5, 6), you notice that you can fill in the Threes box in the Upper section for a total of 9 points. However, you can get 20 points for the same hand if you fill out the 3 of a kind box in the Lower section. By reviewing both sections of the scorecard before you select a box to score in, you can strategize your moves to maximize your score.

6. Fill in your Chance box later in the game

The one-time, catch-all Chance hand lets you calculate the total sum of all your dice at any point of the game. Consider filling it in toward the end rather than in earlier stages of gameplay. It can act as your safety net when you can’t score in any of the other open boxes or don’t want to enter a zero.

For example: If your rolls end up giving you high numbers, such as (3, 4, 5, 6, 6) but you have already filled in the box for a Small Straight, you can keep your Sixes box open for a higher scoring roll and would do better to enter the total into your Chance box.

7. Roll for Yahtzees early in the game

Rolling a Yahtzee early in the game can help you bump up your score in a hurry. Not only does your first Yahtzee earn you 50 points, but each one after that earns you a 100-point Yahtzee bonus. Rolling two Yahtzees could potentially win you the game.

For example: If you roll two Yahtzees, it is worth 150 points (50 points for your first Yahtzee plus a 100-point bonus for the second one). Two Yahtzees add up to more points than the whole Lower section altogether. If you happen to roll a third Yahtzee, it adds another 100 points to your score for a total of 250 points.

If you want more information on game rules, scoring, and strategies, check out How to Play Yahtzee. If you prefer to jump right in, you can start playing Yahtzee online today—either alone or with others!