Workplace Distractions Survey: What distracts us most when we are on the clock? 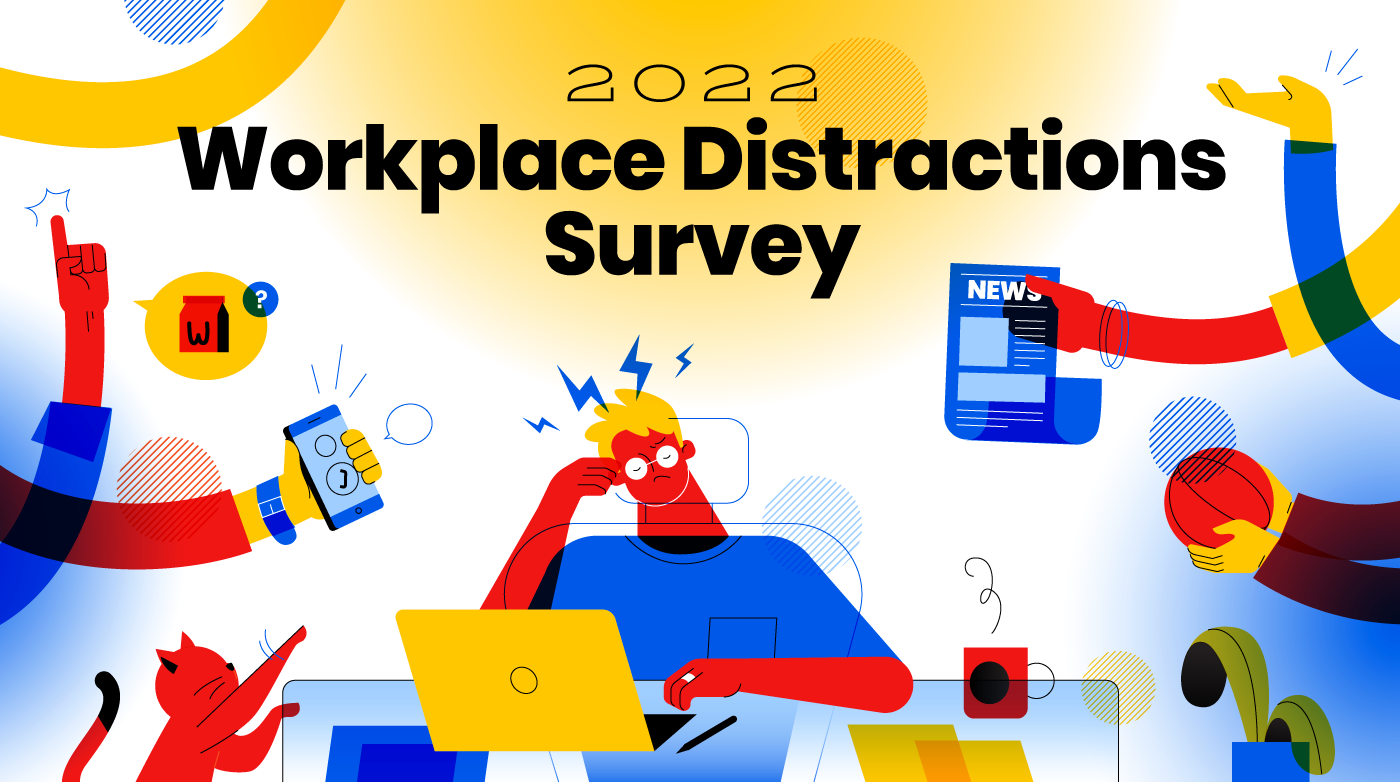 If you’re a fan of The Office, you might have seen Creed playing solitaire or other variations like spider on his computer. He could be powering up his workplace focus, knowing studies show games can improve executive function, working memory, and even problem-solving ability. Or perhaps he’s regrouping after an exhausting task. Maybe he’s just goofing off.

Managers can’t tell, so they’ve been warring with the classic office game since Microsoft first installed it on Windows in 1990. Here at Solitaired we love games, but we also know they can be huge time-wasters at work. So we wanted to know: how many Creeds are among us?

First, we surveyed 1500 U.S.-based respondents, asking: What things distract you when you are at work? Then we asked our own Solitaired.com users, are you playing games on the clock?

Interruptions in the Workplace Beat Gaming as the Number 1 Distraction

Most of us occasionally get sidetracked at work, with the top four distractions each a point of contention for between 20 and 25% of respondents. Still, the top spot belongs to workplace distractions, ranging from coworkers to meetings. 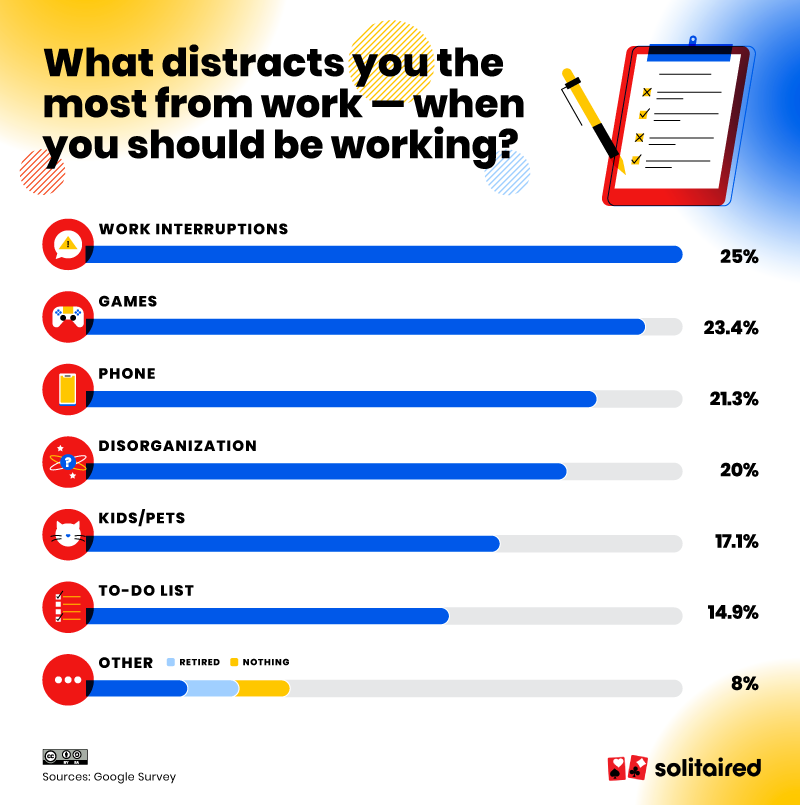 That meetings at work are an interruption from work comes as no surprise to anyone who’s been roped into three Zoom calls in a day that could have been emails. Yet we were a little surprised to see that gaming was the runner-up, even beating out phone interruptions (including social media, notifications, and selfies).

But why wouldn’t games be a prime attraction? We’ve come a long way from the days of Minesweeper. For one, games are now social experiences, like this year’s viral Wordle phenomenon, which ingeniously devised a daily icon to share on social media showing your gameplay success—without giving away the answer to others who hadn’t completed the daily word puzzle yet.

More and more, games are more than time-wasters. As with Wordle, we can play to bond with other office workers during a number of small, bite-sized work breaks. That can help us stay focused the rest of the day. One at-home creative agency owner, Olga Zapisek, explained how games are part of how she segments her day with needed pauses:

"If you want to play Wordle, Candy Crush, check your emails, or scroll through your social newsfeed, then take 10-minute breaks to do just that — if that’s what relaxes you. Those break-times can give you the balance and peace you need to be more productive."

If you’re in the office, finding that balance can be tricky. But you’ll find lists of games you can play covertly, including a game literally built into a spreadsheet, making gaming an increasingly attractive outlet for all kinds of distracted workers craving some cool-down time, from geography buffs to zombie hunters.

Still, not everybody’s been swept up in the trend. Our survey allowed write-in responses, and 2% of those surveyed insisted nothing distracts them from work. One respondent said, “My mind is always on my tasks. I can multitask.”

This task-juggler is part of a tiny minority. 98% of us are actually pretty bad at multitasking and need to concentrate in order to be productive. The good news? One study found that taking 45 minutes to play with coworkers helps us focus so much that it enhances workplace productivity up to 20%.

Other write-in responses that we thought deserved attention? Some people are distracted by:

Who are the Biggest Players? Men and Anyone Aged 25-34 are Most Likely to be Distracted by Games

Which workers are most likely to be in their battle stations instead of their email inboxes? Men and respondents aged 25-34 reported that they are more likely to be leveling up than climbing the corporate ladder. 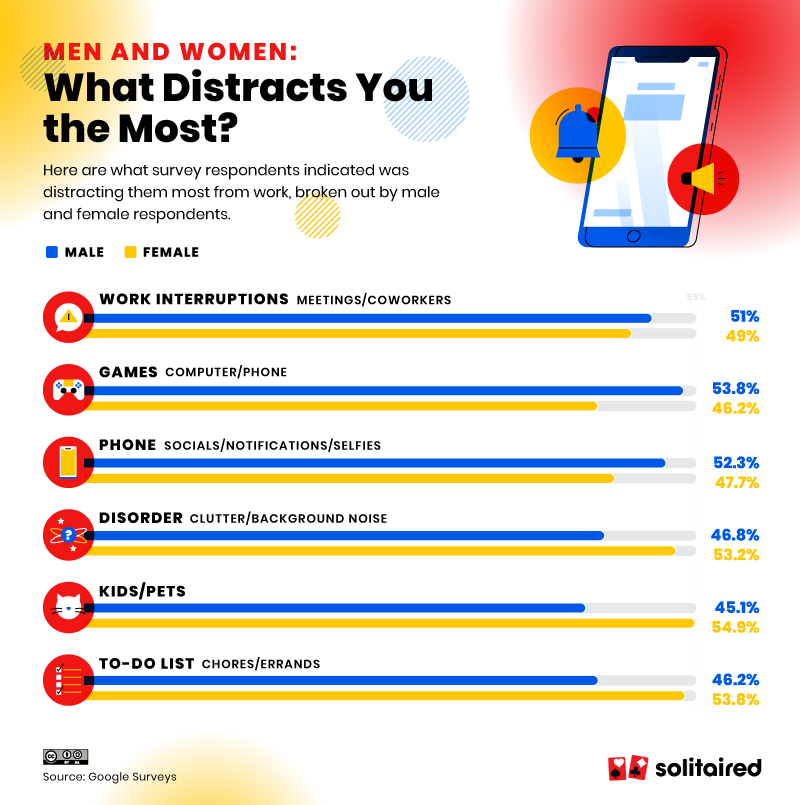 Maybe the kids just know better than to bother their dad when he’s busy playing with laser bees. 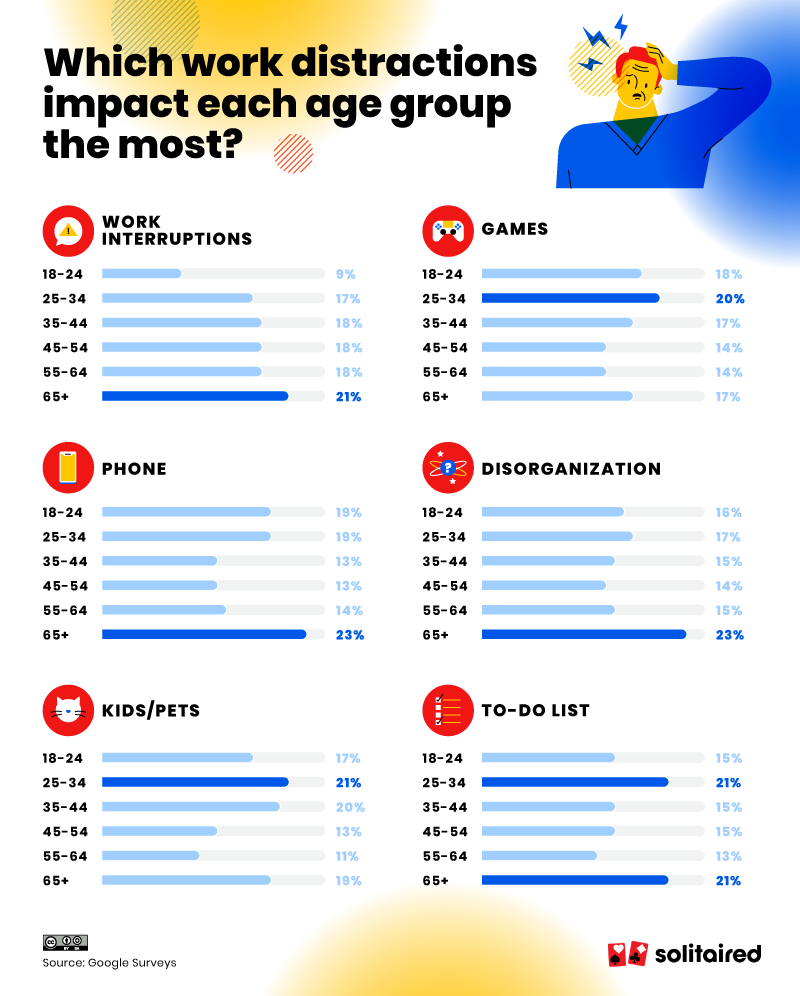 When we break it down by age group, younger cohorts who grew up smashing bricks with Mario and Luigi are more likely to get distracted by games. Games were the biggest work escape for 25-34 year-olds, followed by 18-24 and 35-44 year olds.

The most distractible workers overall were those over 65 years old, although they’re the least likely to be playing a game on the job. Instead of puzzling out a round of 2.5 hoursSudoku, the oldest cohort was especially prone to picking up their phones at work (strangely, they share this time waster with the youngest 18-24 year old workers).

For those 25-44, kids and pets were the biggest distraction. The average age for a woman to have her first child in the U.S. is just over 26 years old, and 76% of millennials own pets, so it’s unsurprising this age group loses the most work time to the needs of their charges.

Defeating the Boss: 1 in 3 Solitaired Users are Dodging Work Responsibilities

Since gaming at work is such a big distraction for so many employees, we at Solitaired naturally wondered if our own users were sneaking around behind the boss’s back.

Do our users play to escape duties or simply for the love of the game?

To find out, we asked our Solitaired players about their employment status. 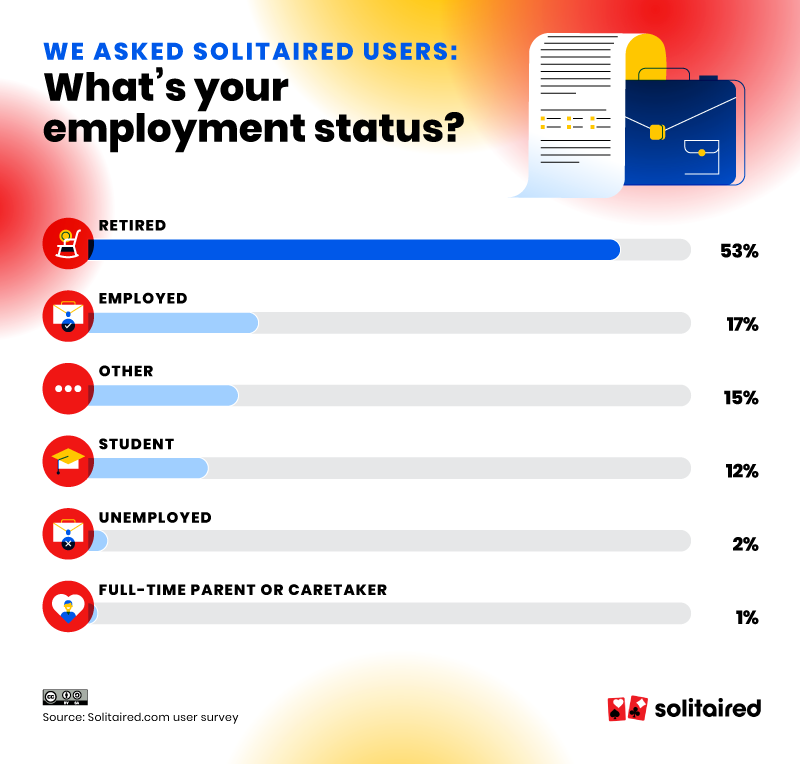 We found a majority, 53%, are retired folks, so they’re off the hook. We wanted to focus on the 17% of Solitaired players who were employed, so we asked them, “Are you supposed to be working right now?” 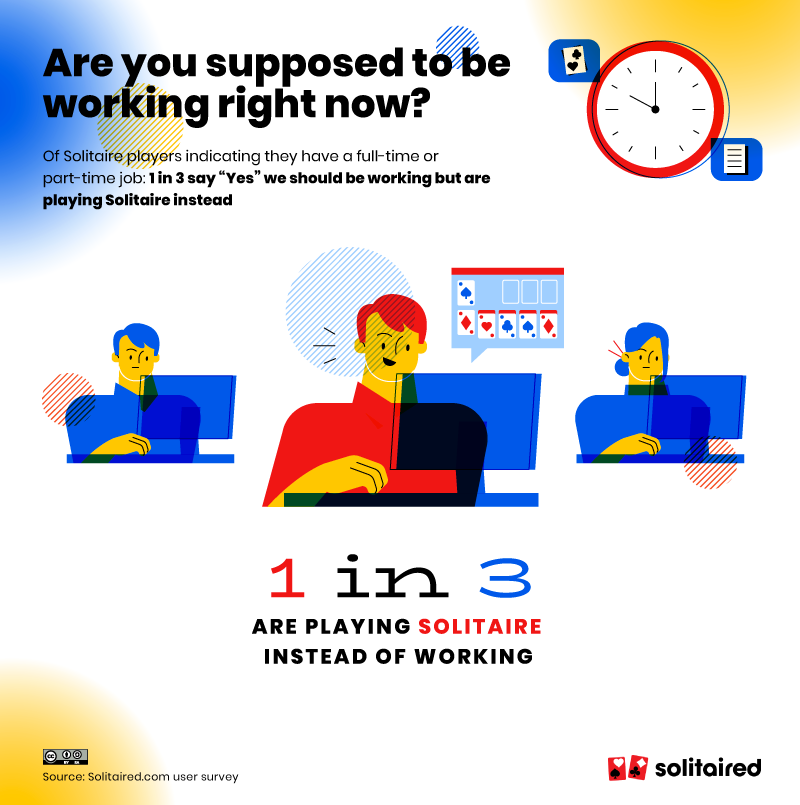 Of the 17% of players with jobs, 1 out of 3 say they do, in fact, play solitaire when they should be working.

Is that so bad?

Since the COVID-19 pandemic sent many computer workers to their home offices, employees haven’t been using their time to take it easy. They work longer hours, in isolation from coworkers, with more stress from all sides. Just 37% of them said the pandemic has been positive for their mental health.

It turns out that working from home may not have allowed for a better work-life balance. The pandemic’s remote employees spend 2.5 hours of their work day accessing non-work content digitally. But rather than doomscrolling, maybe they’re just enjoying a little stress-relief that’s saving them from burnout.

This survey confirms it: there’s a younger face of workday gaming displacing the Creeds of the world, suggesting we’ll see gaming remain a top work distraction for years to come.

However, games and work don’t have to be a forbidden combination. They can provide a welcome mental break and an opportunity for team building. Some forward-thinking companies have already welcomed trivia to their Slack channels and Among Us to their virtual happy hours.

Employers are getting in on the action in other ways, too. Those badges in your last training video? Those were built on the growing realization that games provide enhanced learning and motivation.

The workplace isn’t a virtual metaverse yet, but the future gamification of work might let workers do it all: relax, build relationships, recover, and then jump back in and work harder. Already, 89% say gaming in the workplace makes them more productive. It turns out that just as we need a work/life balance, we also need work/play balance.