Love it or hate it, Wordle is America’s latest game obsession. It’s spread like wildfire, and chances are you’ve seen green, yellow, and white boxes on your social media feed (or maybe you’ve been the one posting them)! Similar to our Word Hurdle, the player must guess the daily Wordle in six tries or less.

We surveyed more than 1,000 Americans who play Wordle to get their opinion about the trendy new game. We wanted to better understand their playing habits, including those of self-reported cheaters who only care about getting the word right and who might use a Wordle Solver.

After shutting off the alarm clock, the first thing most Wordle players do in the morning is open their phone to the game. Almost half (41%) complete the puzzle in the a.m., while one in five waits to play until the end of the day.

There are some diehard Wordlers (we definitely made this word up, but isn’t it catchy?) who play every single day. For some it’s not a daily occurrence, nearly one-third (27%) only play multiple times a week.

It takes the majority of people less than 10 minutes to crack the puzzle. Most people hammer it out in one sitting, but about one in 10 prefer to take their time and work on the puzzle throughout the day.

But what about the all-important first guess? A lot of Wordle players try to cram as many vowels as they can into their first guess; with adieu, tears, and raise among common options. More than one-third (36%) are creatures of habit and play the same first word every time. But most like to live life on the edge… 64% of people choose to start with a different word every day.

As players get closer to their sixth and final guess many get desperate… or sorry we meant to say strategic. Some recent frustrating answers like “cater” and “found” caused players to get the dreaded x/6 while plugging in words like “hound,” “bound,” “round.” To avoid running out of guesses, 59% of players say they sacrifice words (ie. words that they know are not the answer, but help figure out which letters are and are not part of the final solution).

There’s no doubt about it, Wordle players are competitive. Whether it’s a competition against themselves, their loved ones, or that one acquaintance on social media they don’t talk to anymore, people want a good score. More than 60% say it matters how many guesses it takes to get the right answer. On average, it takes players four guesses to get all the coveted green squares.

But some people just have all the luck. Nearly one in four (23%) of players say they’ve gotten the Wordle on their very first try. Insert jealous emoji face here.

A lot of Wordle play happens in bed. More than half of Wordle players say they play the game when they wake up or before they fall asleep. Almost one in four (24%) have admitted to sneaking out their phones during the workday to play the game. And a bold 16% have confessed to playing Wordle while on the toilet (which makes sense considering 90% of people admit to using their phones on the toilet. Hopefully, you washed your hands.

Surprisingly, most people don’t seem to care about seeing Wordle scores on social media. Of the people we surveyed, 70% said they were neutral about it and 12% admitted to hating it. Those players felt like it was annoying and pointless for people to post their scores.

About one in four people consistently share their Wordle scores, but the majority share them with their friends and family via text. Almost half of people compete against their friends for bragging rights.

However, people are strangely pleased to see one Wordle score in particular. Almost one in three (28%) admitted to feeling “schadenfreude” when someone doesn’t get the right answer in six guesses. Basically, they’re secretly celebrating their competitors' misfortune. 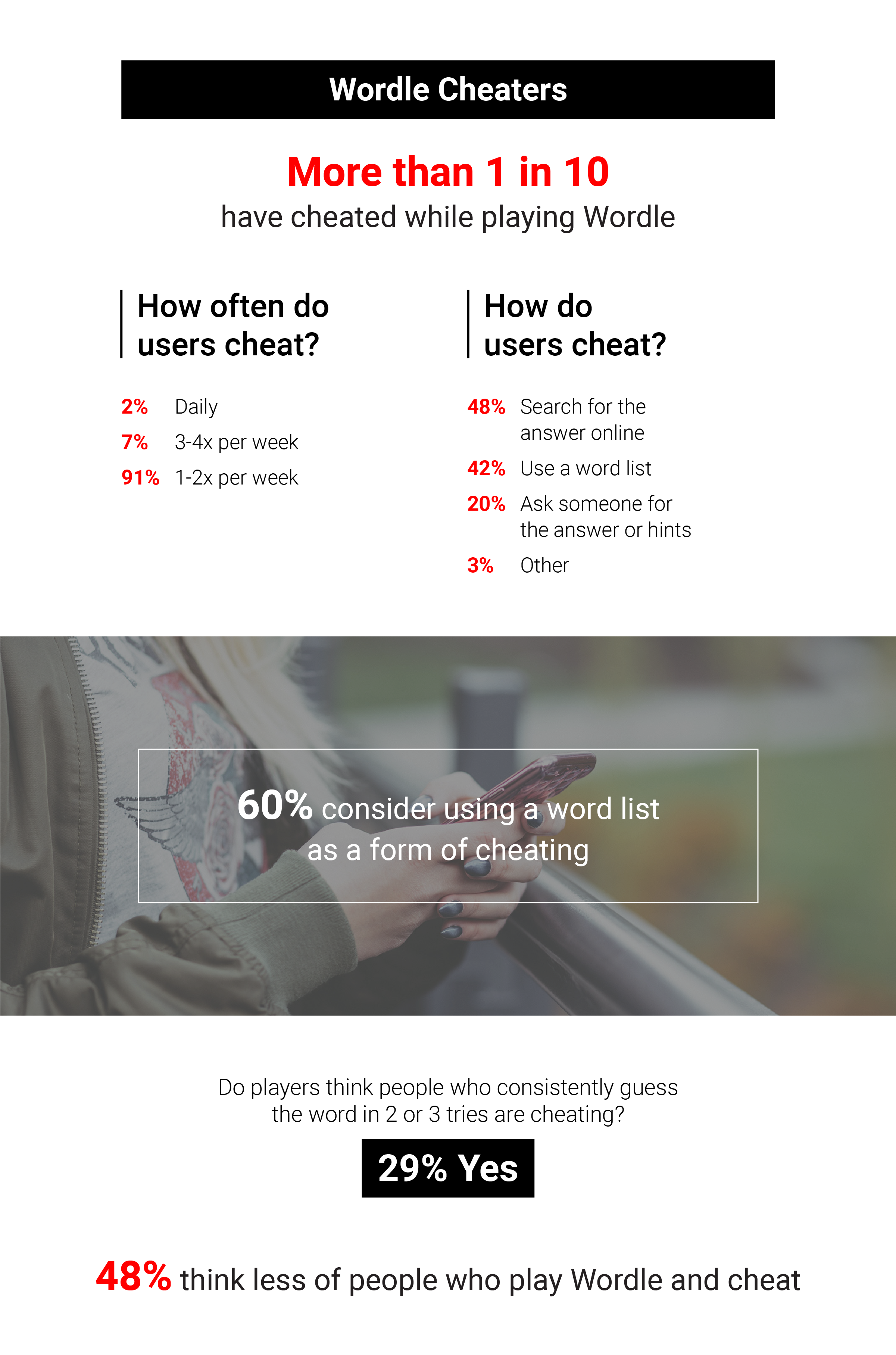 Some Wordle players are desperate to avoid the embarrassment of that x/6. More than one in 10 admit to cheating! Get this, 91% of those cheaters say they cheat one to two times a week. How do they cheat? Nearly half (48%) say they search for the answer online, 42% use a word list and one out of five enlist an accomplice for hints or the answer.

While many Wordle players admit to cheating themselves, they’re keeping a close eye on the competition. People are little suspect if they consistently see others correctly guessing the Wordle in two or three guesses. Nearly one-third (29%) said they think people who regularly solve it in three guesses or less are cheating.

Do you cheat? 48% of all Wordle players think less of you. 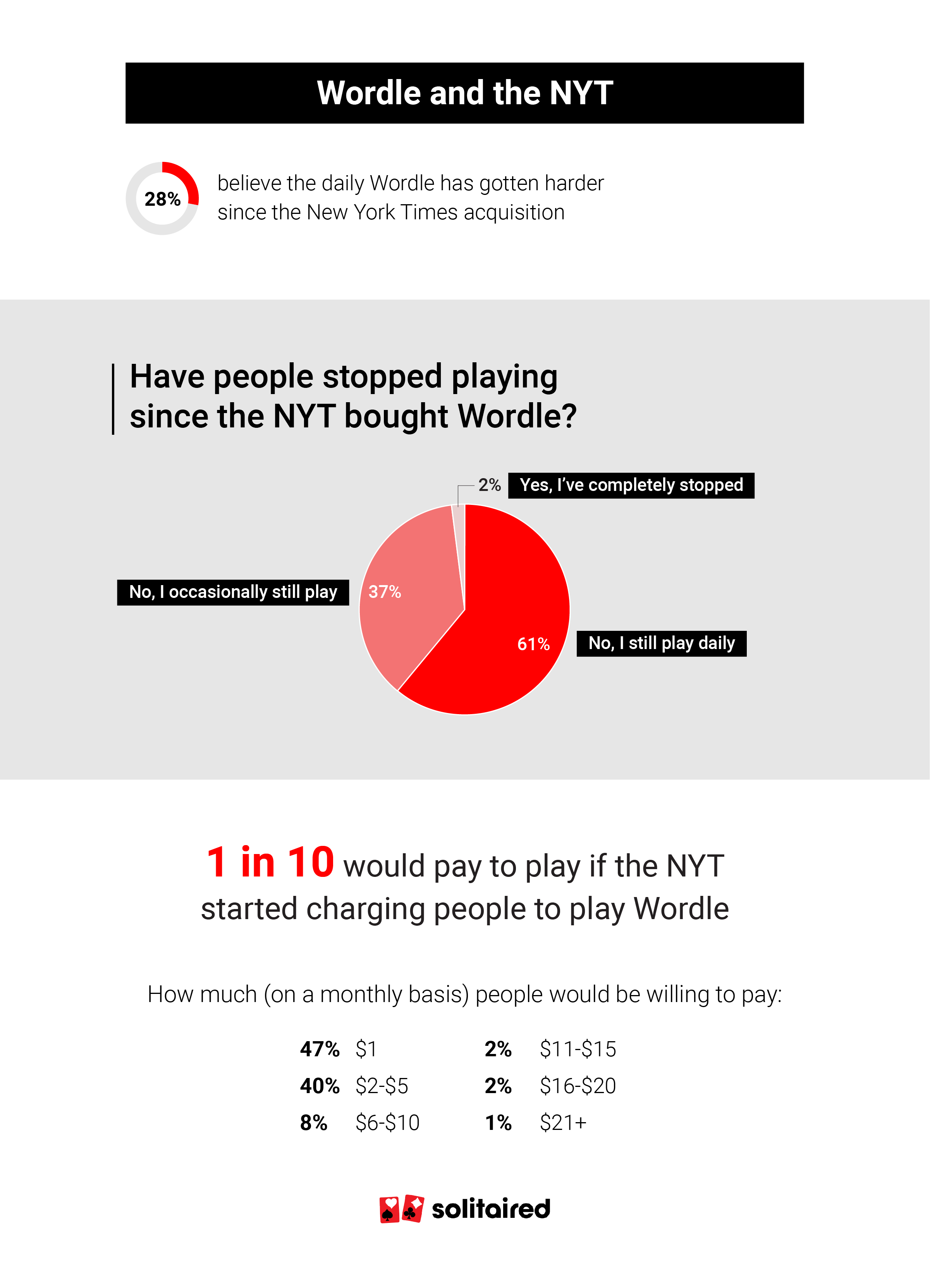 The future of Wordle is up in the air after news that the New York Times forked over a lot of money for the rights to it (think- somewhere in the low seven figures). Unlike wrong words, players weren’t shaken by news of the sale. Most (61%) have continued to play daily. But nearly three out of 10 (28%) players think the game has gotten harder since the NYT took charge.

Speaking of charge, the game remains free for now, but that may not be the case in the future. The New York Times has its own game subscription service, and only promised to keep the game free “initially.” One out of 10 Wordle players says they’d hand over money to keep playing the game, as long as it was $5 or less a month. If potentially paying for Wordle isn’t for you, there are plenty of online games such as Yahtzee, Mahjong, Hearts, and our FreeCell (which of course, is always free).

The question is how long will Wordle keep America’s attention span? Will it take a backseat to a new game just like Words with Friends and Candy Crush did all those years ago? At least for now it remains center stage, so you better keep honing your skills and practicing.

In March 2022, we surveyed 1,087 Americans who play Wordle to get their feedback on their opinions on the game and their Wordle playing habits. Respondents were 49% female and 48% male, with an age range of 18 to 86 and an average age of 36 years old.

When using this data and research, please attribute by linking to this study and citing https://solitaired.com/