When historians look back, they’ll conclude boredom as we once knew it expired around 2010. With the emergence of smartphones, thousands of apps and games, and constant connectivity, we’ve found a way to fill every last gap in our daily and nightly schedules.

In fact at Soltiaired, our goal has been to create games, like our Solitaire, Spider Solitaire, and FreeCell game, that can engage the world in fun ways. We were curious to understand not only where exactly people find time to play our games, but how they use their smartphone in general.

In our most recent study of smartphone habits in America, we investigate how and where people use smartphones to stave off boredom, fill time, and be stimulated. Of course, we encourage people to enjoy digital leisure however they please, but if you find yourself walking across a busy street while still glancing down at your Instagram feed, maybe it’s time to reflect on your habits.

We started by asking people in what scenarios they most frequently find themselves using their phones out of boredom.

While it’s hard to narrow the list down, the most obviously taboo habits of phone use include at a religious service (60%), during a wedding ceremony (50%), and at a funeral or wake (31%). Truly, no place is sacred.

Why so much phone use? Obviously it’s stimulating, but that’s not the only reason people retreat to their screens. Eighty-six percent of Americans we surveyed say they regularly use their phone to avoid interacting with other people and 61 percent admit they use their phone to avoid talking to specific family members around the holidays. Additionally, 91 percent acknowledge that even when they put themselves in a situation to socialize with other people face-to-face, they sometimes look at their phones out of boredom.

Our data confirms what has long been suspected—toilets and phones are a perfect pair! A whopping 90 percent of people regularly use their phones on the toilet and 75 percent of people say they frequently spend more time on the toilet than they initially intended because they get distracted on their phone. More than half (53%) of those we surveyed say they have felt their legs and/or buttocks go numb from using their phone on the toilet for so long. About as well as anything, that sums up our relationship with our phones.

What else do phones pair well with? Exercising, driving, and cleaning. More than half of Americans say they could never do any of these three activities without being able to listen to content through their phone. 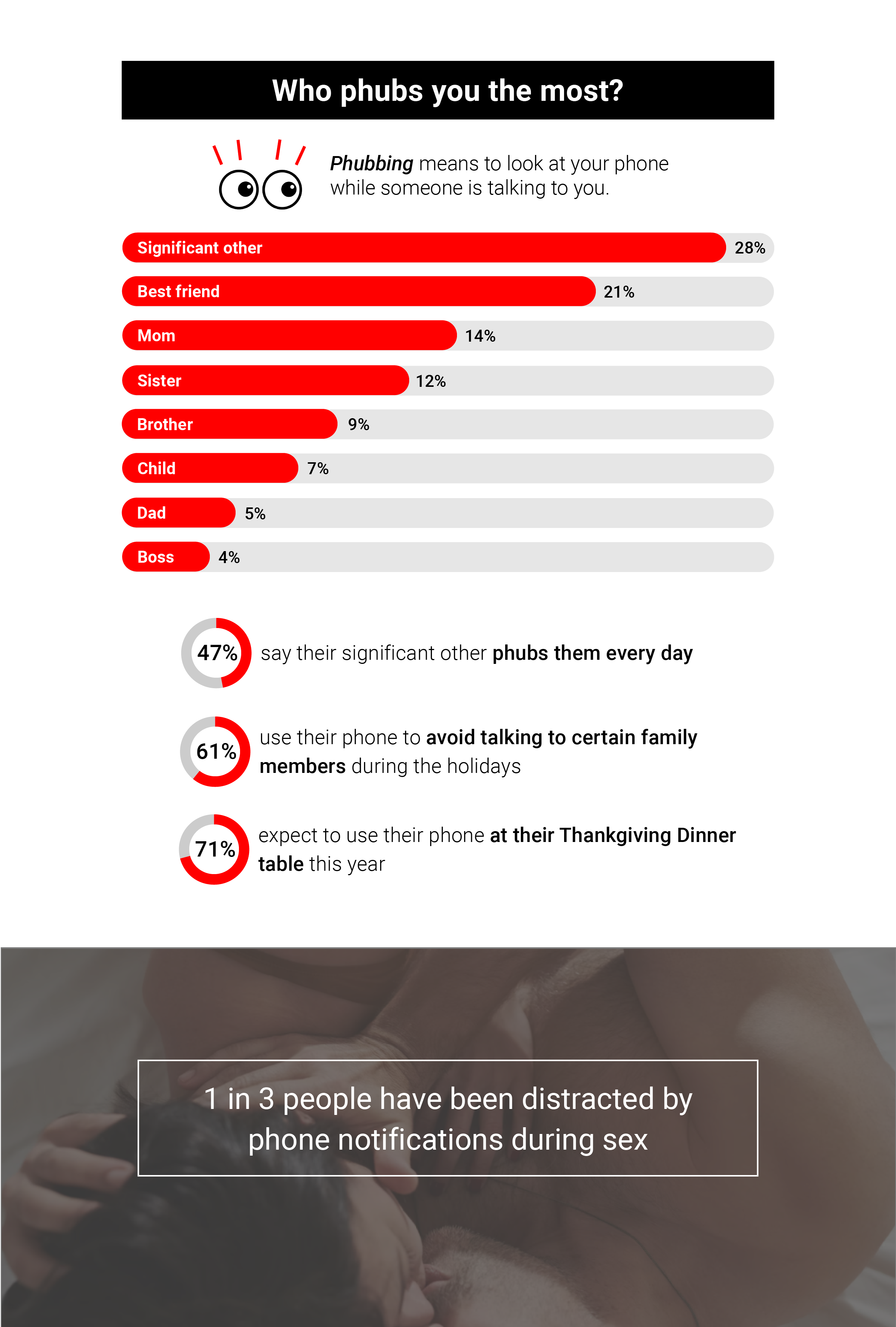 Naturally, we had to ask about phubbing, the act of looking down at your phone while someone is actively talking to you. What analysis of boredom would be complete without addressing this ultimate social affront?

Significant others and best friends are the most common culprits in the phubbing game, most likely because we spend so much time around these people. After that, it’s moms! Our own moms are phubbing us! And they’re doing it at three times the rate that dads do it.

Finally, to add insult to injury, we regret to report that phones are encroaching on the most intimate part of our lives too. One in three Americans (31%) say they have been distracted during sex because of phone notifications. And when we asked people the first thing they do right after having sex, 40 percent say they check their phone.

On that note, we conclude our report.

Between October 8-9, 2021, we surveyed 1,098 Americans to understand their smartphone-related habits. Our respondents were 51 percent female and 49 percent male, between the ages of 18 to 68, with an average age of 30 years old.

Feel free to use this data and research with proper attribution linking to this study. When you do, please give credit and link to solitaired.com