To play solitaire, or other popular variations like Spider Solitaire or Freecell Solitaire, these key terms will help you understand how to play any solitaire game.

Array - The seven columns of cards dealt at the start of the Solitaire game; also called the tableau.

Ace piles - Four stacks of cards, starting with the Aces at the bottoms as they become available. Cards of the same suit are played to them sequentially, up to Kings at the tops. The game is won if all 52 cards get played to their respective piles.

Braiding - Also called laddering, this is the practice of attempting to restrict a suit to one column (to the extent possible). For instance, spades are put in one column, and clubs in a different column; similarly for the two red suits.

Bottom card - The lowest ranking, face-up card in a column. See also Top card to understand the use of the term here.

Building - (1) To add cards to (or move cards among) the columns. This goes from Kings down to the lower ranks, and is therefore called building down. (2) Add cards to the Ace piles. Building is the process undertaken by the player that involves moving cards around the Tableau for the purpose of achieving the game mode’s main goal. These mechanics will vary based upon the game mode’s rules, with options to require building based upon the cards’ suit, color, and more. In Klondike solitaire, for example, cards are built into the foundations based on alternating colors and descending card values.

Cells - While not used in all forms of solitaire, cells are a special mechanic that provide the player with a maneuvering space over a round’s course. Cells take the form of a “free space,” often above the main Tableau, that will accept a single card at a time. Any card can be placed into these cells, though it is common to use this space to reserve a strategically significant card such as an Ace. In classic solitaire, there is no cell or free space.

Columns - The seven columns of cards laid out at the start of the game (collectively called the array), or what may be left of them as the game proceeds.

Deck - Klondike Solitaire is played with a standard deck of 52 cards, 13 of each suit; Jokers are not used. “Deck” is also used by some to refer to the cards remaining after initially dealing out the columns, that is, the hand. To avoid confusion here, I only use deck to refer to the full set of 52 cards.

Expose - To turn a face-up card at the bottom of a column face-up so it can be either built on there, or played to its Ace pile. To do this, the card covering it must first be moved.

Foundations - A family is one term used to describe a “completed” foundation based upon the specific rules of the game mode. Most modes define a family as containing one of all 13 card values, starting with the low card Ace and ending with the King. In Klondike solitaire, each family must have the same suit. Also see Aces Pile. 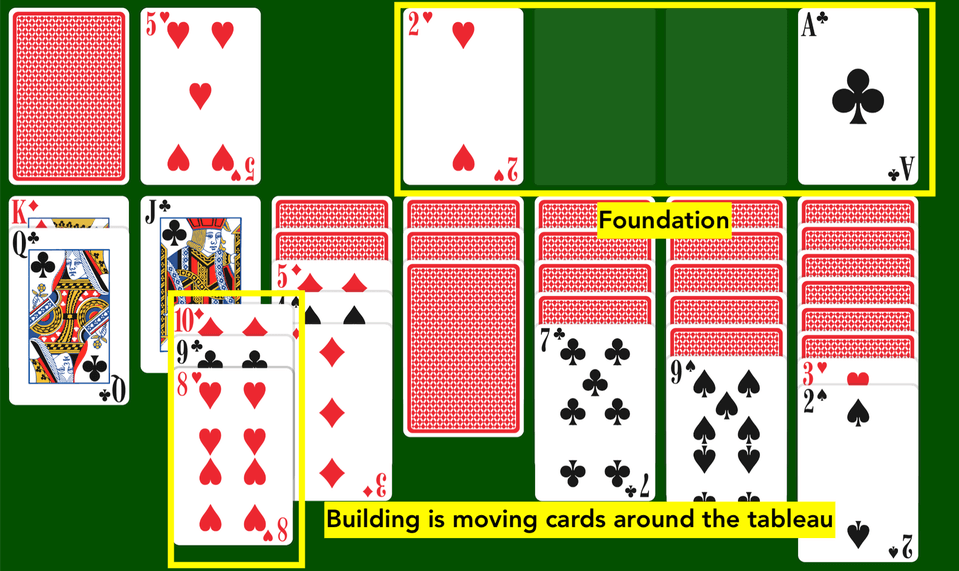 Hand - The cards remaining after initially dealing out the columns, held face down and turned over one at a time to be put on either one of the seven columns, an Ace pile, or the waste pile. (With playing cards, these were held in one’s hand, so the name sticks, even though there’s now only a mouse in your hand - which would have been really creepy 50 years ago.)

Pass - I use this term to refer to flipping over the cards in the hand; either playing them or putting them in the waste pile; and then turning the waste pile over to be the hand again, when another pass is begun.

Play - Generally refers simply to moving a card, but some rule sets say that one can only play a card to its Ace pile, and all other moves are simply moves. But it's difficult not to call any activity on the columns playing the cards as well, and some rule sets do. (Perhaps the difference lies in the fact that the game is won when all 52 cards have been played to the four foundations; other moves simply support making such plays, which actually win the game.)

Rank - Sequence or position of the cards within their respective suits. In Klondike Solitaire, Aces are low, and Kings are high.

Smooth - To play smooth means to use braiding, aka laddering, in which you try to play cards of the same suit(s) to the same columns. See Braiding.

Stock or stockpile - See Hand. The Stock (called the “talon” in some game modes) refers to the cards left over after setting up the Tableau for a round. These cards are usually kept facedown, with cards being withdrawn from the top of the deck and placed in the “waste” pile unless the player can apply the newly revealed card to their foundations.

Depending on the rules of the chosen solitaire game, the Stock can sometimes be remade by taking all cards from the waste pile and flipping them back over. At that time, the new Stock may be shuffled if the game mode allows for it.

Suit - A set of thirteen cards identified by the same symbol: Clubs (♣), Spades (♠), Diamonds (♦), or Hearts (♥). I suppose in today's parlance they'd be called icons.

Tableau - French for table; see Array, or Columns. This is the area used for “building” over the course of a game. Tableau structures can vary from one game mode to another. In Klondike or classical solitaire, foundations are randomized when the player creates the basic seven column cascading structure at a round’s commencement. This whole area is known as the Tableau.

Top card (or, top of a column) - This to refer specifically to the highest ranking, face-up card in a column, regardless of how far up or down the card is on the screen. The significance of being the top card is that, when it's moved, cards below it are exposed for play (or a column is made empty for a King). If there's only one face-up card in the whole column, it is both the top and the bottom card.

Waste pile - The pile of cards which are drawn from the hand, but aren’t placed on either a column or Ace pile. They’re placed face-up; once a face-up card is covered, it can’t be played until any cards covering it are moved and put into play. When the hand is gone, the waste pile is turned over, and begins life again as a hand.

Also known as the “heap” or the “discard pile”, the waste refers to the collection of cards that are drawn from the Stock and placed face up. Only cards from the Stock can be placed in the waste pile, while only the card at the top of the waste pile is considered “active” for placement onto the player’s foundations. 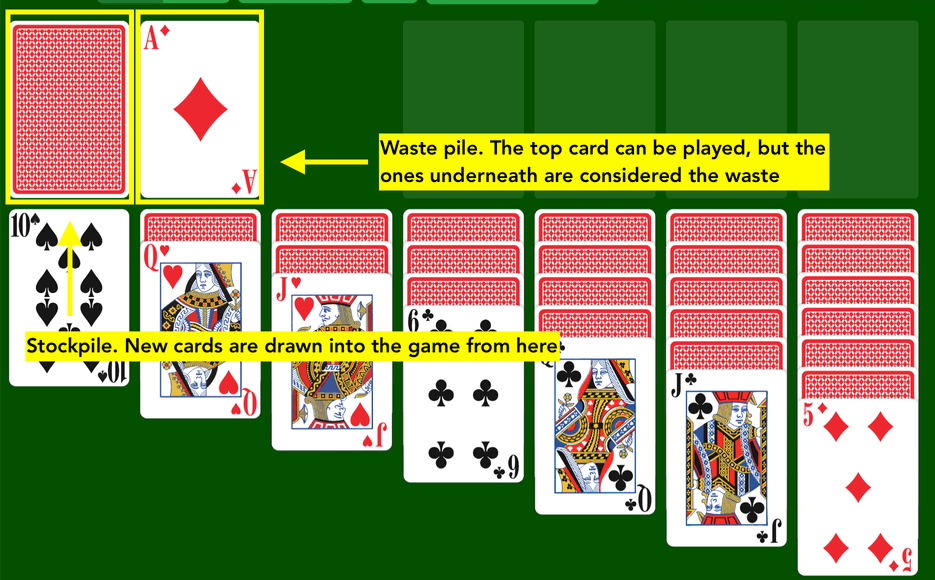 That's plenty to get you through the game. Wikipedia has an article with more, if you're interested: hhttp://en.wikipedia.org/wiki/Solitaire_terminology

To learn how to play our solitaire games, see how guides on Solitaire, Spider, and FreeCell