While Classic solitaire or Klondike solitaire is by far the most ubiquitous and what most people think when they hear solitaire, there are other popular versions.

In this game mode, all cards are dealt into eight cascades face up such that all cards are visible from the get-go. The goal of this game is to build up each of the foundations (which receive their own special cells) by suit, starting with the ace and rising to the king.

This game mode has become increasingly popular since it was added as a free game in the Windows operating system in the 1990s.

This mode requires two decks of 52 cards, which are shuffled together and dealt out into 10 cascading piles. The top card of each pile is then flipped, after which point the player works to build families by rank and in suit sequence order. Additionally, 10 cards from the Stock can be dealt out for use so long as there are no open spots on the Tableau. This can be played with one, two, or four suits.

This unique game calls for the player to arrange the Tableau in a single large cascade shaped like a pyramid, with a single card at top and continuing down to a six card base. All cards are face up, with only cards that are not “covered” by two other cards in the pyramid being considered active. These cards must be paired with cards draw from the Stock to create pairs equal to 13 (based upon traditional valuations for face cards). 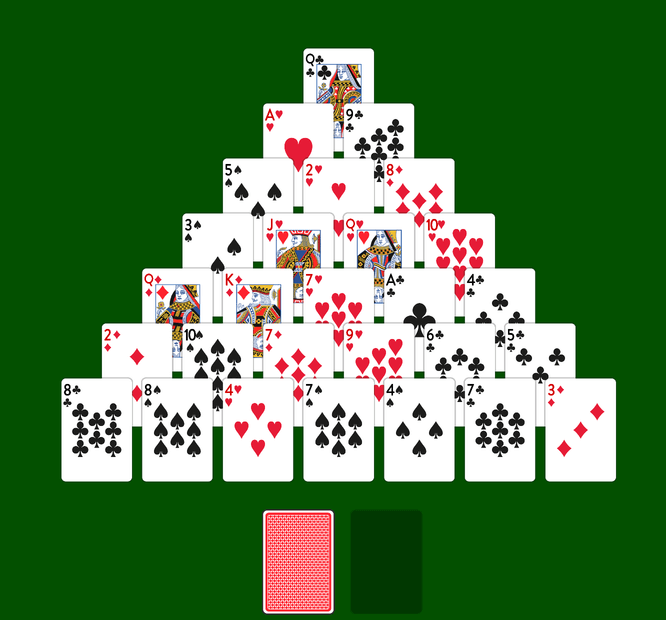 You can learn about more popular variations of the game on here, and if you're intereseted in other types of solitaire games with tile matching, try Mahjong. Otherwise, Hearts is a trick taking classic card game you might enjoy.