How to Play Spades

Spades is a trick-taking strategy card game. It’s a four-player game contested in pairs, in which each team attempts to earn points by bidding on how many ‘tricks’ they think they’ll win in the game. Points are then awarded for every trick won – with additional points for those won within the pair’s bid value – and deducted for pairs that win fewer tricks than they bid on. In games like Spades and Hearts, a ‘trick’ is the name given to a single turn in which a player bids one card from their hand of 13 cards. Four cards in total are therefore played to the table, making a ‘trick’. One player ‘wins’ each trick, based on the cards played and their values. 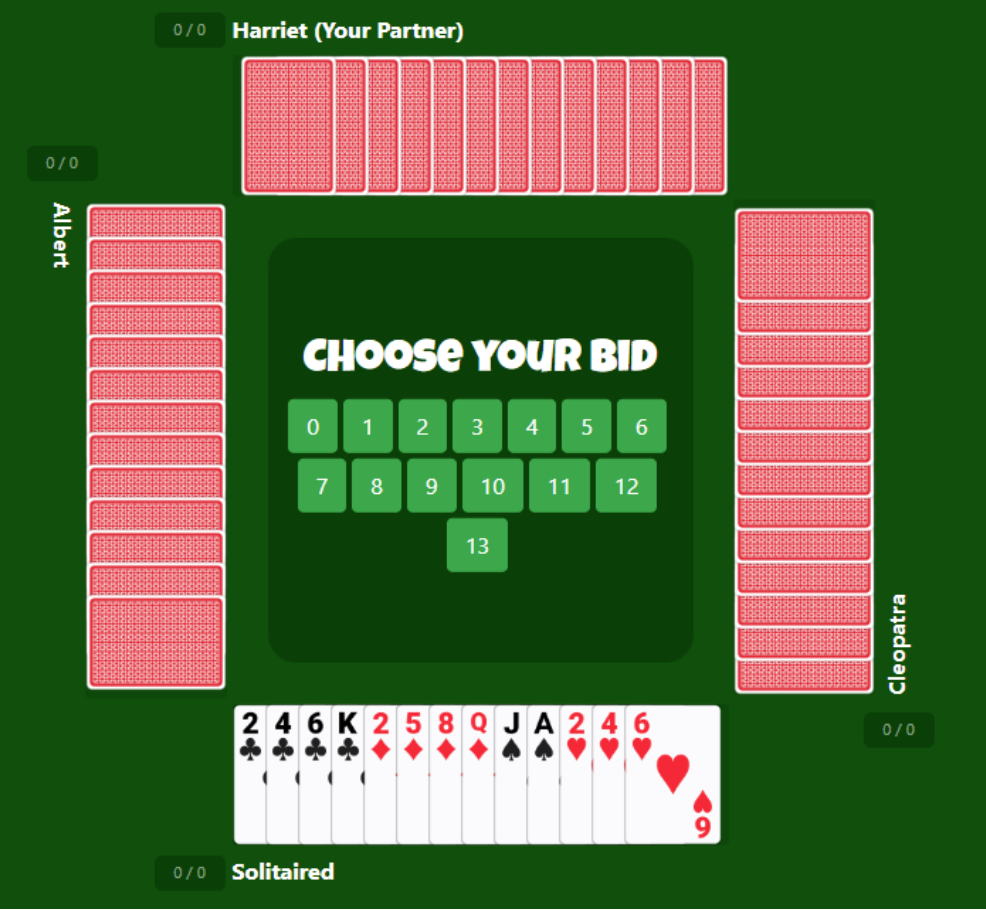 How to Play Spades

Spades is a four-player card game that sees a standard deck of 52 cards split between the players – giving each player a hand of 13 cards. The four players then split into two teams of pairs. The first step is for each player to ‘bid’ on how many tricks they think they’ll win during the game. Each of the four players makes a personal bid and each pair’s bids are added together to make a team total. The first dealer is initially chosen via a draw for the highest card or randomly when playing online. Players then take turns clockwise, playing one card each. To begin, any card can be played other than a spade – until the first instance in which a player cannot play any other card. For example, if the dealer plays a heart card and the next player has no heart cards, they are then allowed to play a spade card. Once the first spade card has been played, the suit is said to be ‘broken’ – meaning any player can then play a spade card at any time. The player that wins each trick of four cards will depend on the cards played. Each player is expected to ‘follow suit’ (play a card of the same suit as the dealer) unless they cannot do so. If all four played cards are of the same suit, the highest value card wins. Aces are high in Spades. If a player is forced to play a heart, diamond, or club that does not follow suit, their card is void and they cannot win the trick. If a player is forced to play a spade out-of-suit, the spade card trumps all others, and the player automatically wins the trick. If multiple spades are played in any hand, the highest card wins the trick. There are 13 ‘tricks’ in a round, with players eventually playing every card in their hand. Once all cards are played, the scores for that round are totaled.

How to keep score in Spades

Pairs continue to win one point for every ‘bag’. However, if a pair win 10 bags throughout a game, they are deducted 100 points. If a pair fail to meet their minimum bid, they are deducted 10 points for every trick bid. For example, if the pair bid to win seven tricks and only win four, they will be penalized 70 points – 10 for each trick bid. When a pair fail to meet their minimum bid, they are awarded no points for the tricks they do win – so, their total final score for that round would be -70. There is no limit on playable rounds in Spades, and the game instead continues until one pair reach a minimum score threshold. This is typically 500 points, however, the winning score may be 200 points in a shorter game. The basic scoring system for Spades is as follows:

There are certain rules in Spades that make the game unique from similar trick games like Hearts. The key rules of Spades include: 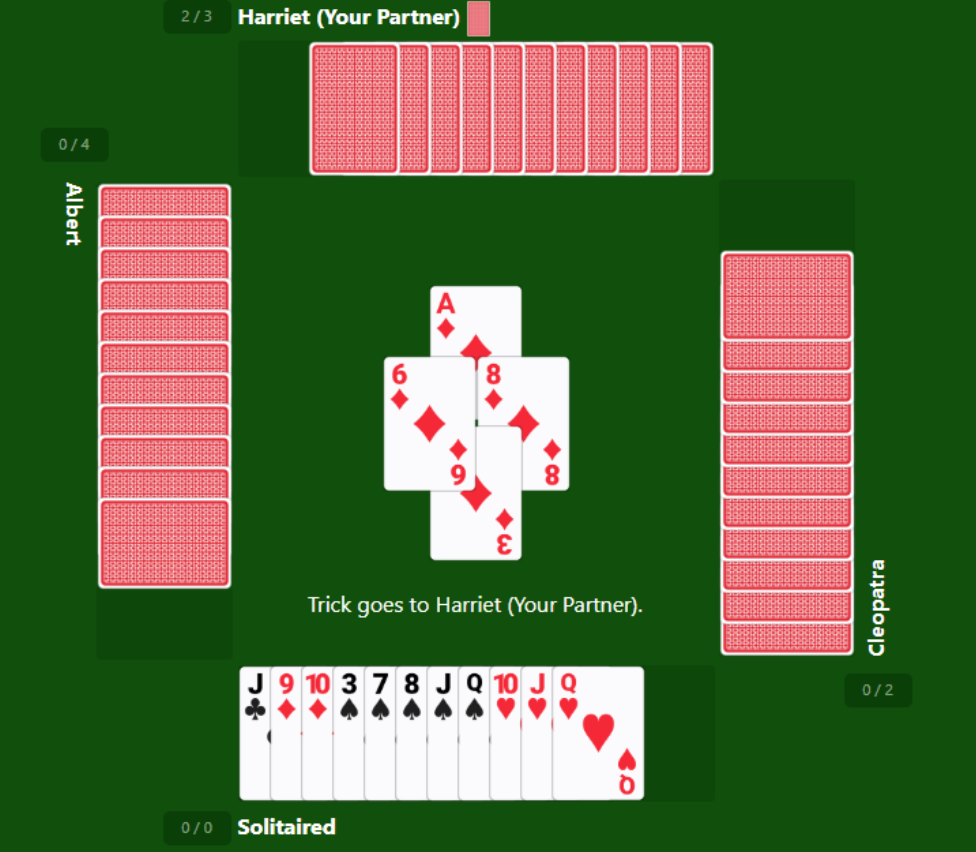 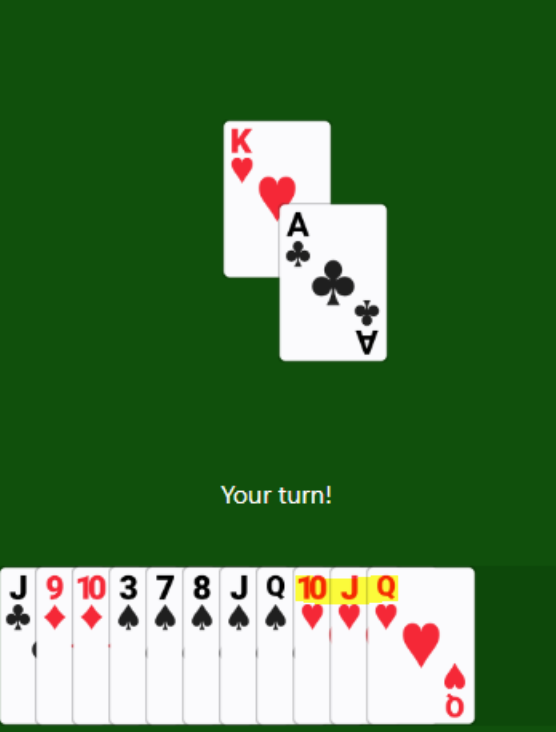 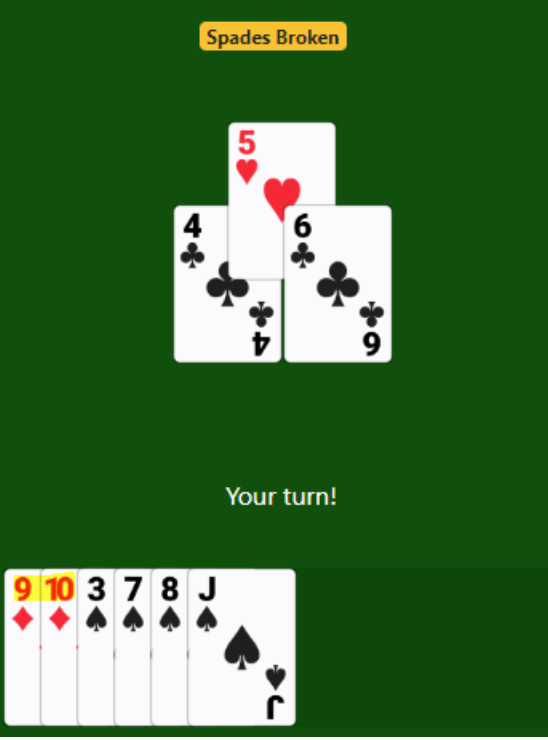 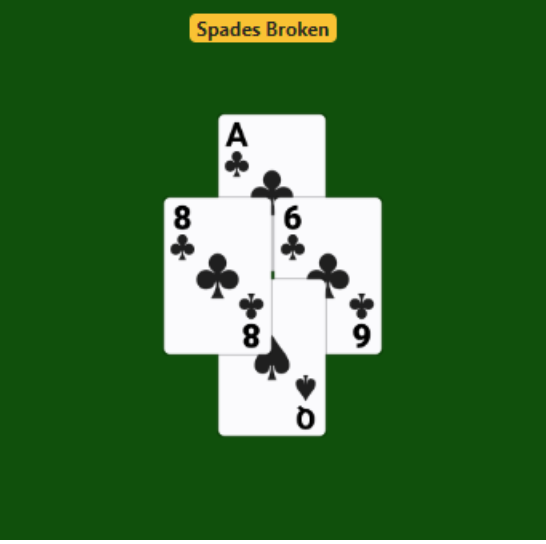 How to win at Spades

While it isn’t possible to win every game of Spades – as it’s a multi-player game and two pairs are competing with each other – there are some tips and tricks that can improve a player’s chances of winning. 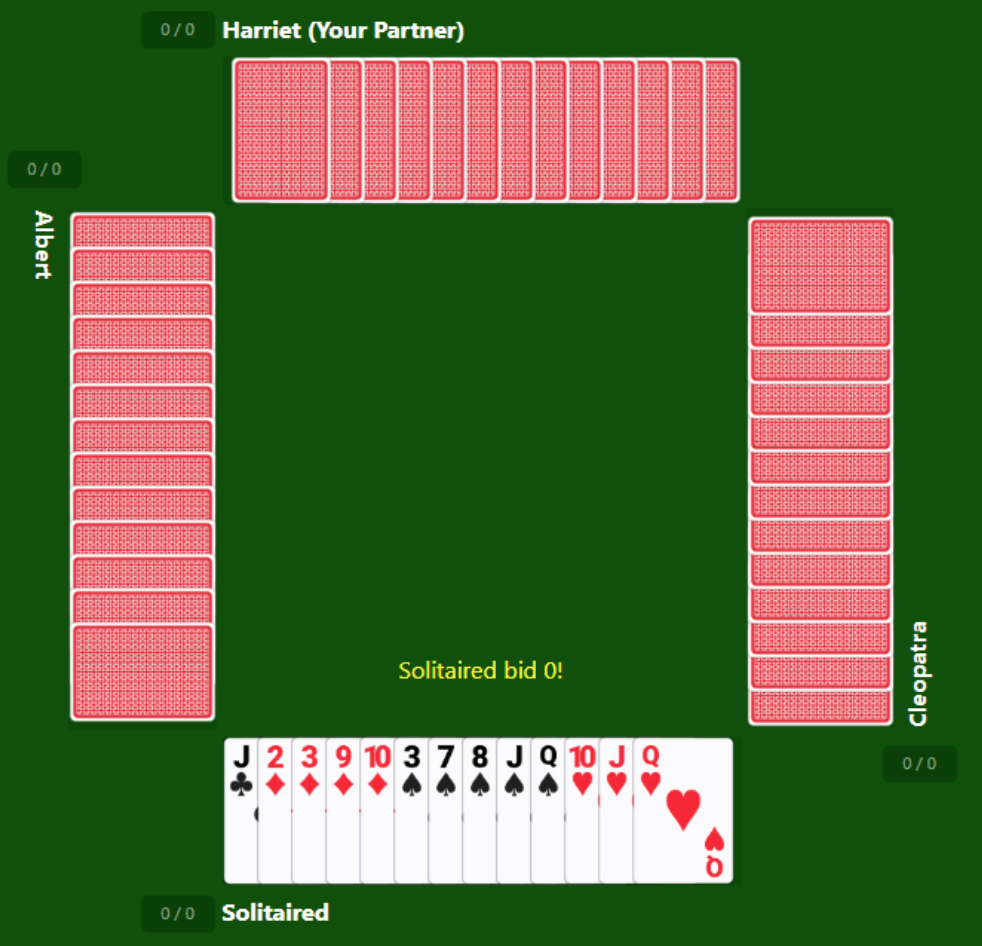 Some games that are similar to Spades in their patience and strategy requirements include:

At Solitaired, we have over 500 free games to play.

How to play Spades for beginners?

Beginner players should start by learning the rules and key terms of the game – including the scoring system. The next step is creating a sensible bidding strategy based on the cards in their hand, as well as understanding how points are awarded and deducted, to avoid costly punishments. New players can then use online platforms like Solitaired.com to practice their new strategies, with unlimited games against AI.

What is the object of the game Spades?

The aim of the game spades is to win as many tricks as possible while considering your initial bid amount. This is because players are awarded points for each trick they win within their initial bid. When a trick is won beyond the bid amount, this is called a ‘bag’ – and when a pair hits 10 bags in a game they are deducted 100 points. So, the key to winning at spades is creating a successful bid strategy that maximizes points won while minimizing points deducted.

Which card leads in Spades?

The dealer can lead with any card in their hand except a spade. Spades must be ‘broken’ by a player who cannot follow suit in one round. Once this first spade card has been played, spades are said to be ‘broken’ – and can be played at any point by any player, including leading a trick.

What happens if you bid nil in Spades?

Bidding nil in Spades is a risky strategy but has the potential to turn a losing game into a winning game. When a pair bid nil, it means they expect or intend to lose all 13 tricks in the round. The likelihood of a pair losing all 13 tricks is minimal. When a pair bid nil and win nil, they are awarded 100 points. If a pair bid nil, they will win a ‘bag’ for each trick they do win in the round. When 10 bags are won over the whole game, the pair are deducted 100 points.

How do you count bids in Spades?

Bids are determined by each individual player, with both bids in a pair added together to give a total team bid. Players will calculate their bids based on the cards available in the hand – and whether or not they feel they have a high chance of winning many tricks. For example, if a player has multiple aces and kings, they will typically bid higher as these cards are likely to win a trick.

What is the winning score in Spades?

In a traditional game of spades, a pair wins when they reach 500 points. There is no standard ‘winning score’ and the winning team is simply the first to reach this 500-point minimum. If both pairs reach the 500-point minimum in the same round, the winner is the pair with the highest total score. In some variations of Spades, the winning score is adjusted to 200 points to make the game quicker. 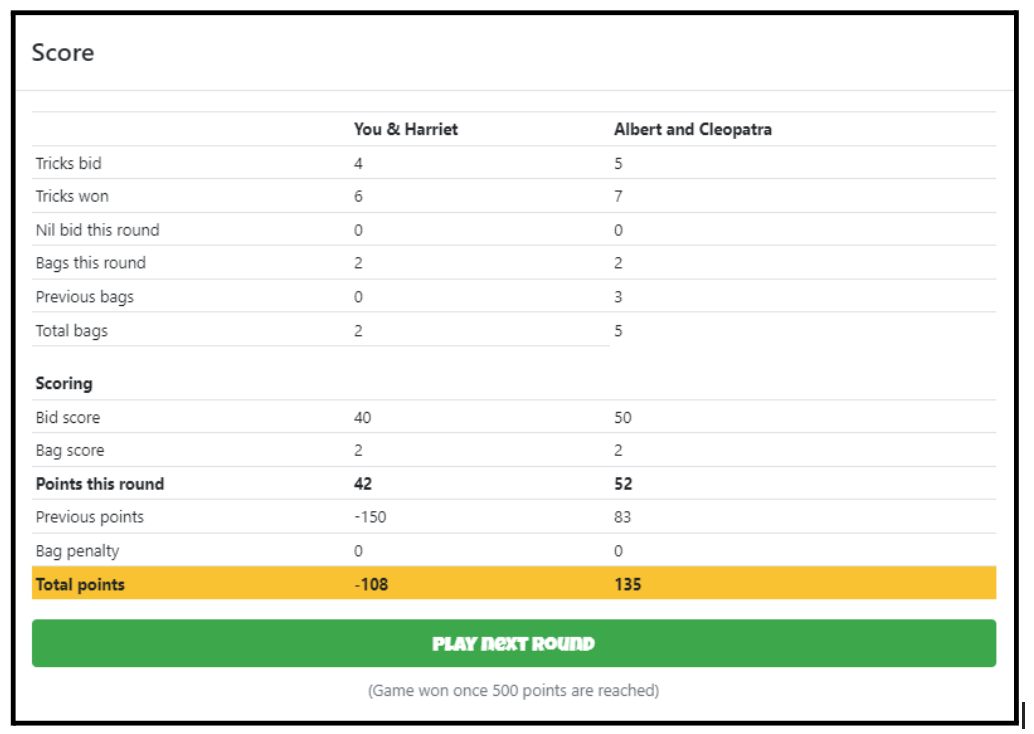 Below is a list of the key terms used in Spades that you may come across in this guide or while playing the game. We’ve even included a definition of each term to help you better understand the game and improve your gameplay:

Bag – a bag refers to a trick that is won after a pair have already won all the tricks in their bid. For example, if the pair bid on five tricks and have already won five in the round, each trick won beyond this is a ‘bag’. A bag is worth one additional point until a pair hit 10 total bags, when they are then deducted 100 points.

Bid – a bid is a pair’s estimate of how many tricks they will win in a round. Points are won and deducted based on tricks won compared with the initial bid – with points deducted if a pair doesn’t reach their bid amount, and points awarded for every trick won when a pair hits their bid amount.

Boston – refers to a round in which a single pair win all 13 tricks.

Trick – a trick refers to a single play of four cards. The highest card in a trick wins – with spades trumping all other suits in a trick.

View our free games – including Spades and other trick games like Hearts – all of which are completely free to play, now.