How to Play Cribbage

Cribbage is a two-player card game typically involving a cribbage board, some pegs, and a standard 52-card deck. When a player reaches 121 points, they win.

Cribbage is a two-player card game. However, you can also play in teams of two (four players total) or online with a virtual opponent.

To play, you’ll need a cribbage board, pegs, and a regular deck of playing cards (remove the jokers).

If playing online, you do not need a board to keep score.

When playing online, the score is kept on the top left of the screen — you can see your score and your opponent's score (these take the position of the two pegs).

To decide who the first dealer is, both players take a random card from a face-down shuffled deck. The player with the lowest card is the dealer for the first round of cribbage. You’ll take turns dealing for each round after that. 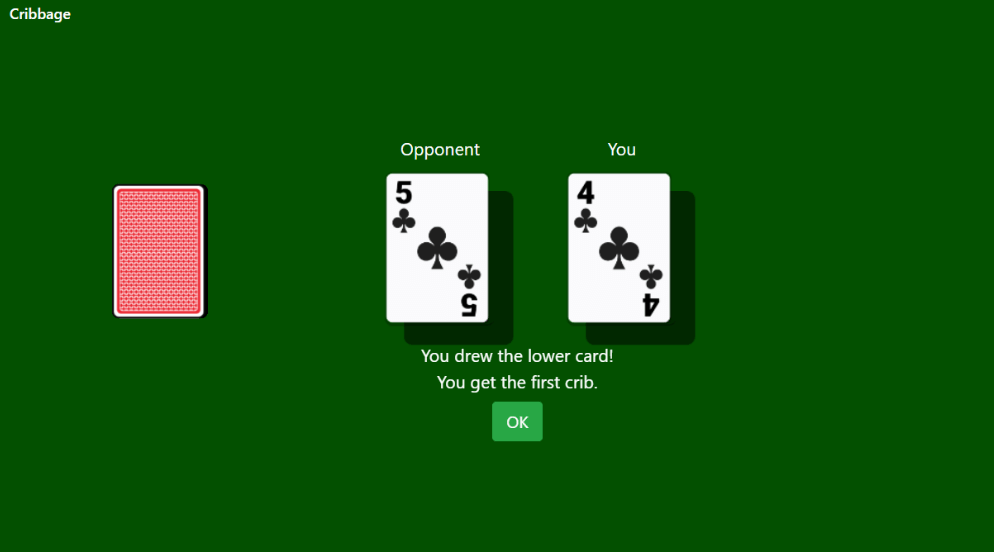 The dealer shuffles the deck of cards, and the non-dealer will cut the deck. Then, the dealer deals 6 cards to each player. 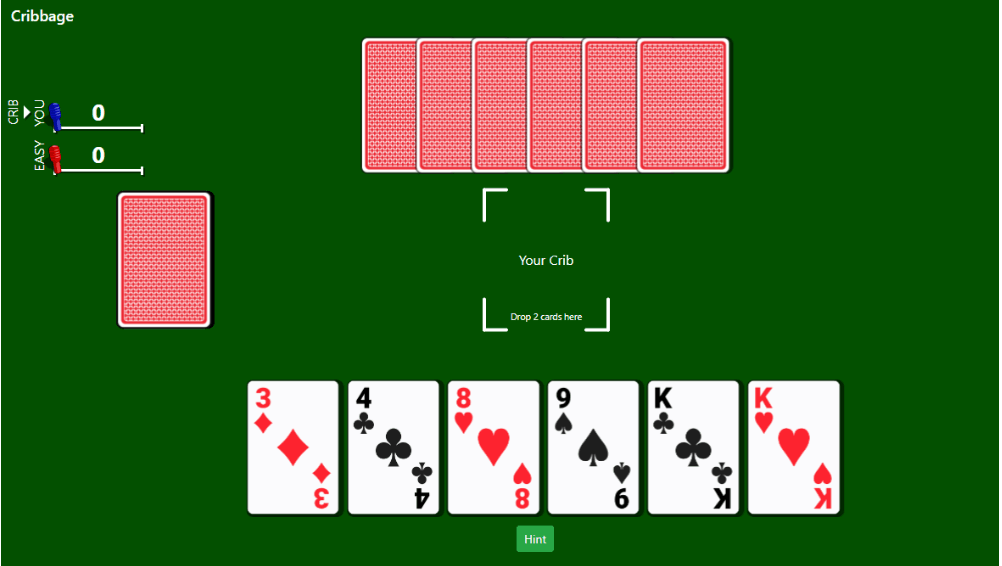 Once each player has been dealt 6 cards, both players must decide which 2 to keep and which 2 to discard.

The discarded cards form the crib — the crib becomes a part of the dealer’s hand, but the cards are not revealed until the round has been played.

The crib will award points during “the show” stage of the game — more on this shortly. 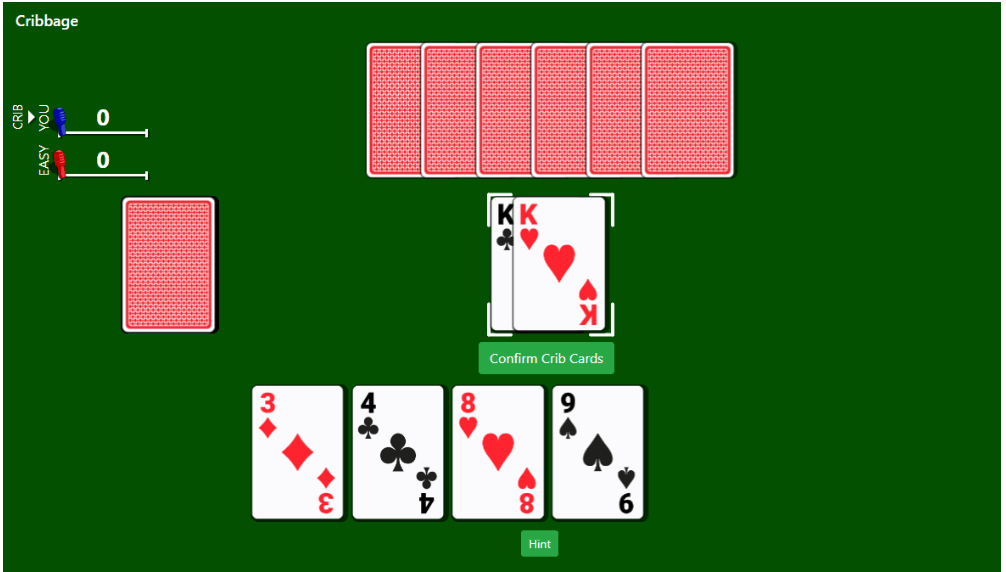 The aim of the game is to score 121 points. Once a player scores maximum points, the game ends and they win. If you’re playing with a board, you’ll need to move your pegs up and down the board twice to win, beating the other player.

Once the crib is built, it’s time to play the starter card.

The non-dealer cuts the deck of cards and turns over the top card — this is the starter card. The starter card must remain face up to use during the round.

To start, the first player places a card from their hand. The dealer then places another card, adding up the value as you go. Players continue placing cards until the value of the cards reaches 31, or if no player can place a card without exceeding 31. At this point, the player will call go.

When a player cannot make a move, they must say “go.” The other player is then free to make a move. The player with the last move is awarded 1 extra point.

The cards are then moved to the side, and players begin a new pile with the remaining cards in their hands, starting with the player who called go.

You’ll need to peg up as you score points during the hand. After the cards have been played, players will take back their original cards to tally points. This is called “the show.”

The points are combined with the starter card — this is the card the dealer revealed before the game began.

There are a number of points to be gained during each round and at the end of every hand. The pegs in the board will help you keep track of your running total.

The scoring combination count is how you decide how many points are awarded for each move and at the end of each hand. 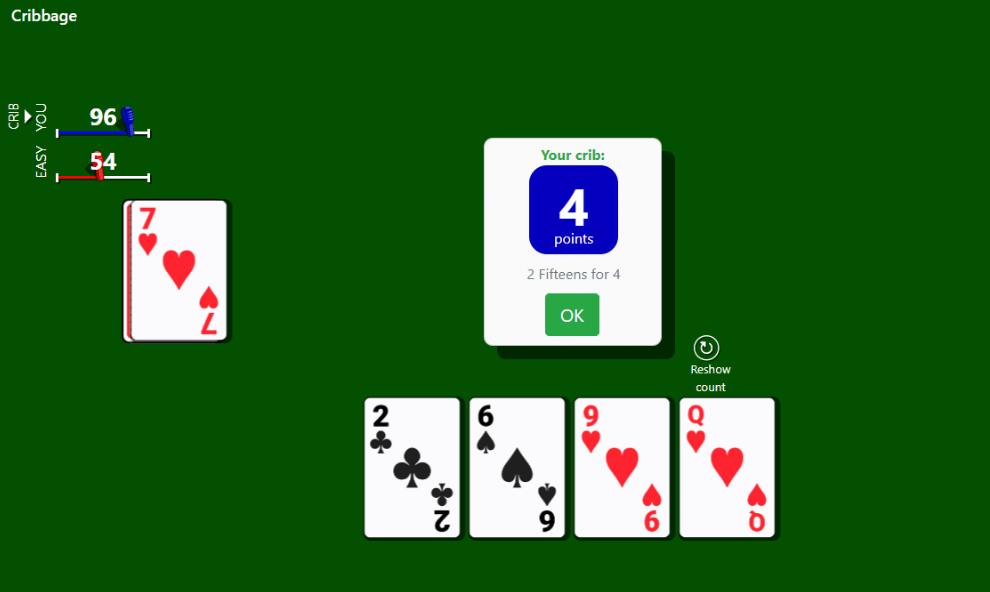 If you’re looking to get better at this popular two-player game, you’ll want to develop a good strategy. And while luck certainly plays a factor, knowing how to play and what moves are best will definitely increase your chances of winning.

If possible, you should avoid counts of 21. Placing a card and leaving the total value of 21 opens up a move for your opponent to place a face card to achieve 31, awarding them with a further 2 points.

Make the most of being the dealer

Being the dealer is advantageous when playing cribbage. The points from the crib always go to the dealer.

Remember: both players get to be the dealer, so make the most of your turn to maximize your points.

Keeping low cards to the end of each player’s hand also opens up more opportunities to play without saying “go.”

Is it easy to play Cribbage?

Cribbage can be overwhelming and complicated at first. But after a few games, you’ll begin to pick up the rules. Once you get the hang of it, it’s a lot of fun!

How long has Cribbage been around?

Cribbage was invented by Sir John Suckling, an English poet, in the 1600s. However, some people still refer to its original name, “Noddy.”

Can I play cribbage without a board?

Yes! You can play cribbage without the classic wooden board by keeping a handwritten tally, or by playing online. The scoring system is tracked with numbers instead of using pegs to work your way around the board.