Hearts Strategies and Tips to Win 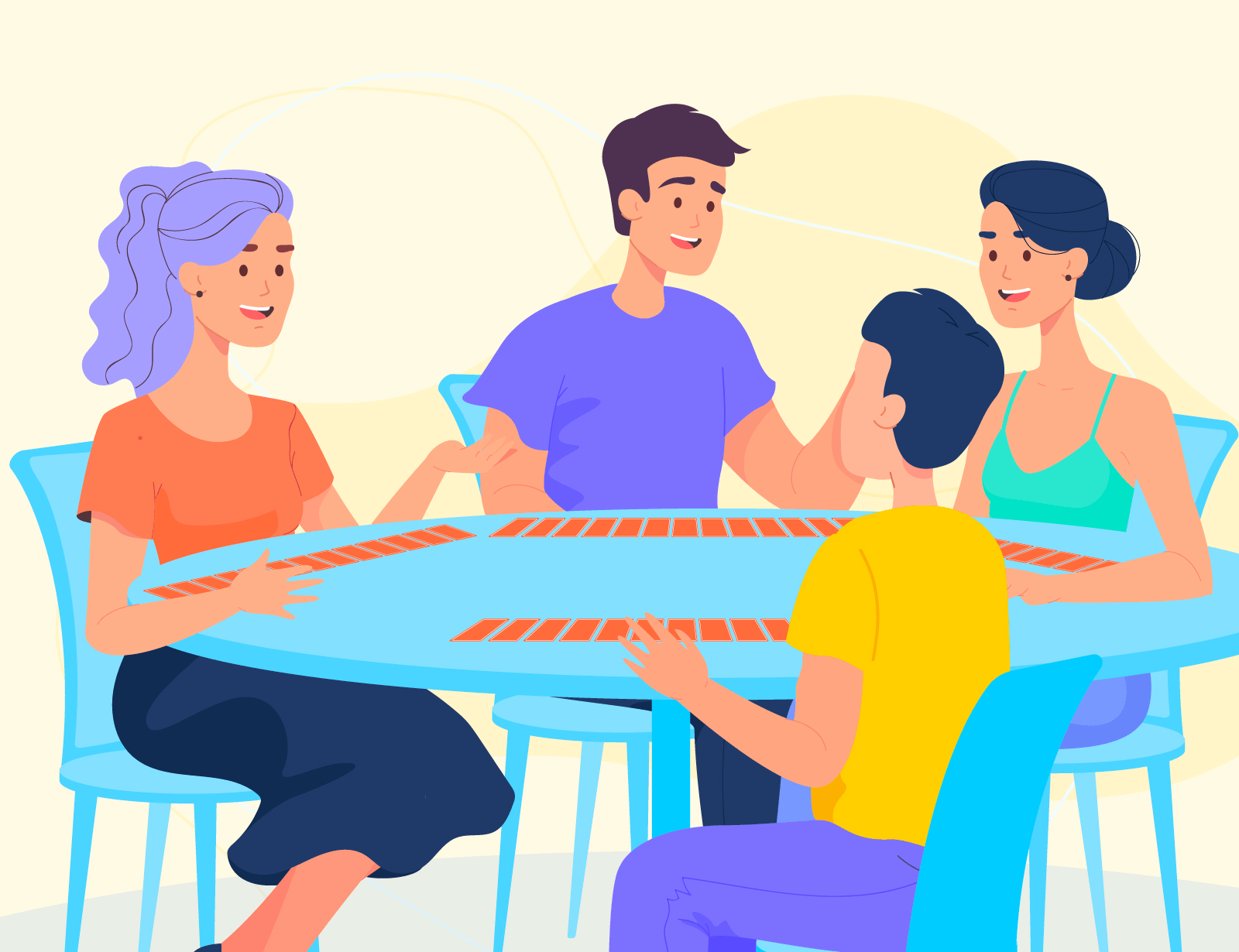 The game of Hearts is a trick-taking game, made up of a series of rounds, or tricks, where winning a trick may mean scoring penalty points. The game ends once a person reaches 100 penalty points, and the winner is the player who scored the least. Cards from the diamonds and clubs suits don’t result in penalty points. However, every heart card is worth one point, and the queen of spades is 13 points.

In the game of Hearts, you simply follow suit, and the person who plays the highest card of the suit that led wins the trick. The two of clubs starts the first trick of each new round, and while you can’t play any penalty cards during the first trick, you can rid yourself of penalty cards or high cards in subsequent tricks when you don’t have to follow suit.

The only time you benefit from taking tricks with heart cards or the queen of spades is when you take every heart card and the queen of spades, also known as “shooting the moon.” When you shoot the moon and take all the penalty cards, you end up with zero penalty points, and all the other players each get 26 points added to their scores.

Because not every trick in Hearts contains penalty cards, using specific strategies while you play helps you avoid tricks that cause you to earn penalty points. With the right strategies in place, you can win the game by accumulating the least amount of points. In this Hearts strategy guide, we cover how to play Hearts and 10 different Hearts strategies to improve your gameplay.

1. Pass certain aces to the left 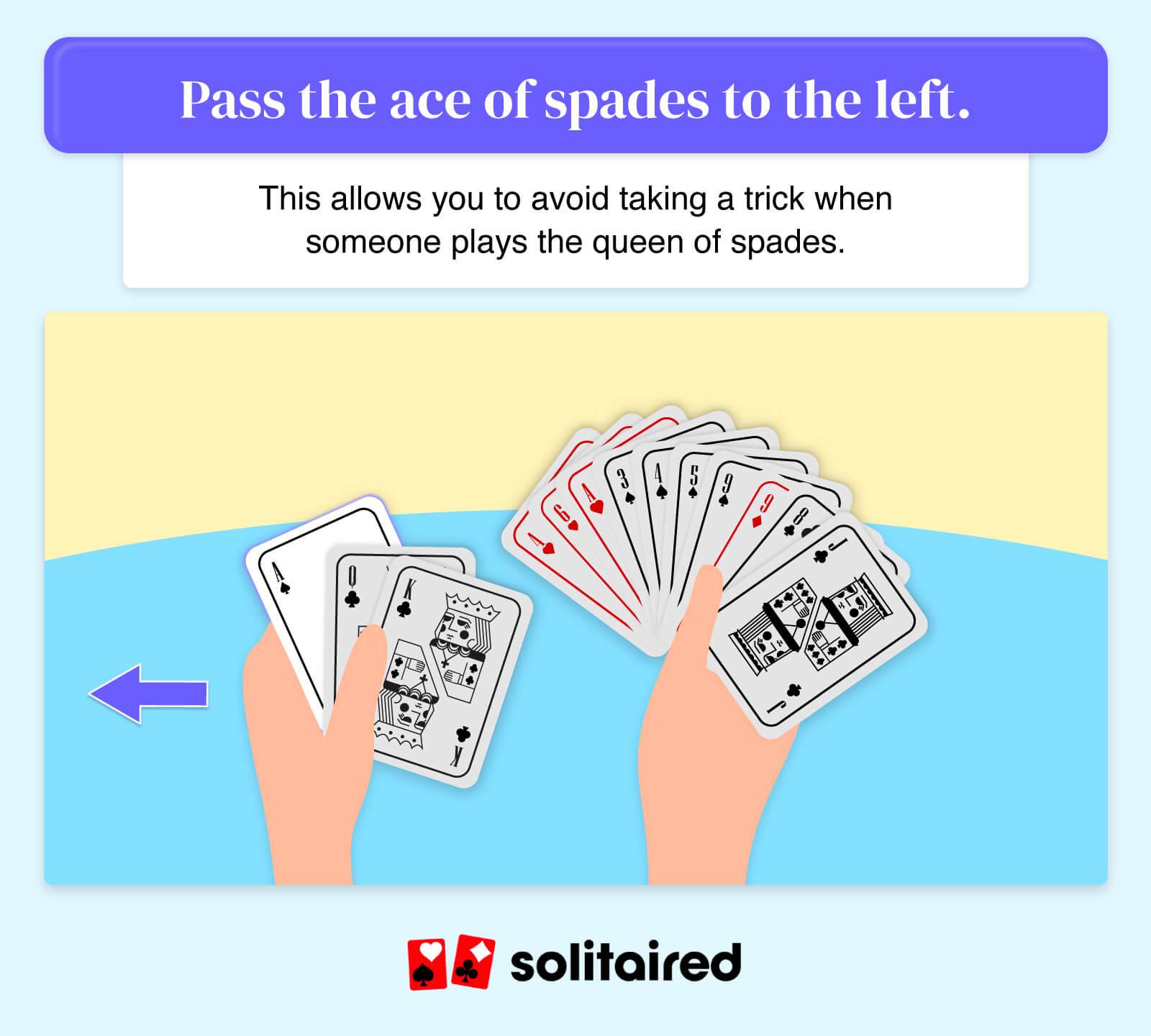 Before each hand, you get three cards to pass to another player. Aces are the highest cards, so if you want to avoid taking tricks, passing certain aces before the round starts is a good idea. Consider these circumstances before passing your aces:

Passing your aces lessens your risk of taking a trick. You can get rid of the lead card by keeping lower cards that would “get under” an ace if played. This makes it easier for you to not take tricks so you can avoid penalty points.

2. Pass the two of clubs 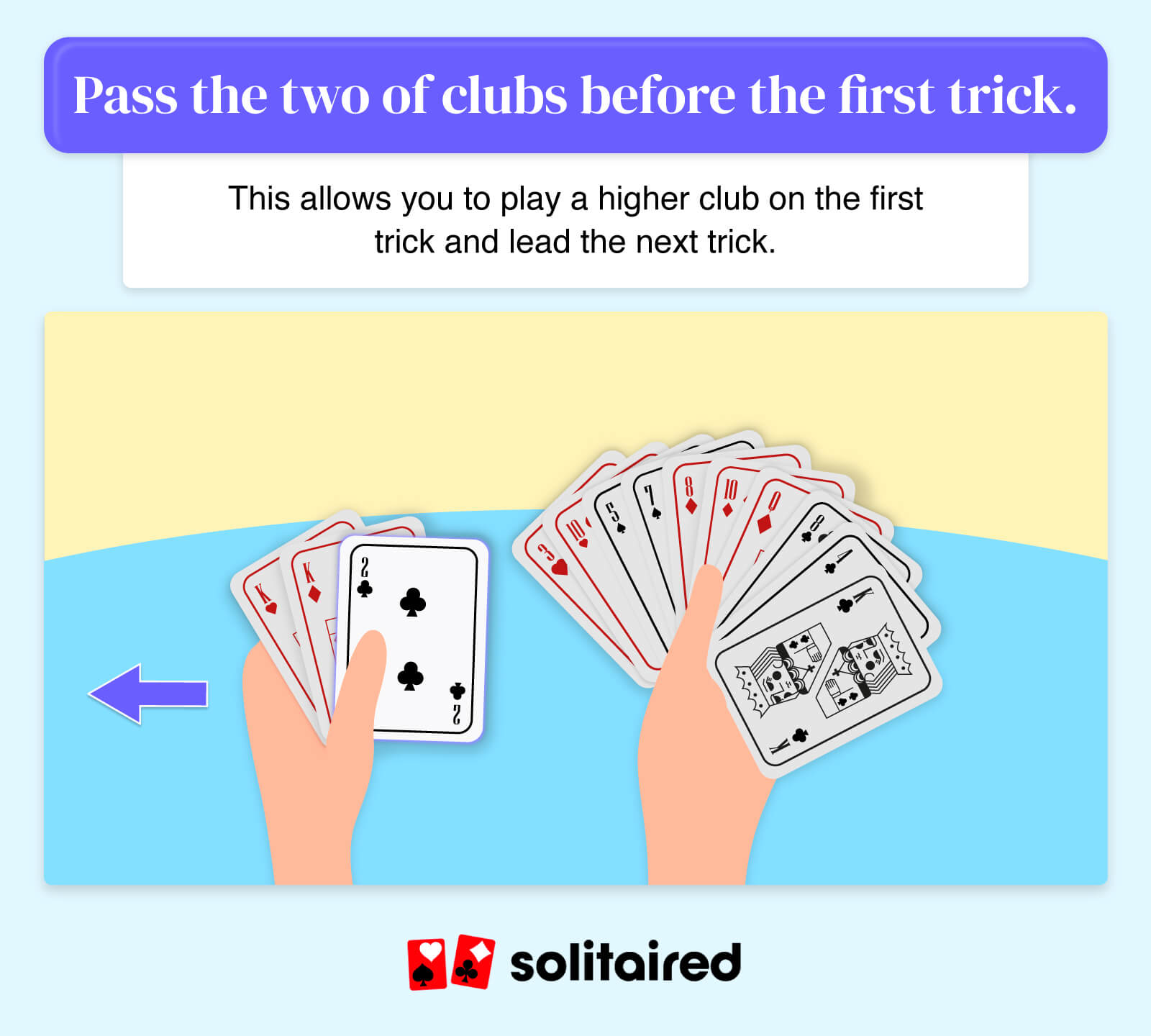 If you end up with the two of clubs, passing that card to another player before the trick begins guarantees you a chance to win the first trick or a chance to get rid of high cards that aren’t penalty points. This is especially true if you have a high club card, or the highest card of the suit, the ace of clubs.

Of all possible tricks to win in the game of Hearts, the one you really want to win is the first trick. The first trick is exceptional because no penalty cards can be played, so it doesn’t set you back to win it like another trick might. Plus, you can control what gets led in the next trick, which can be a useful game strategy if you’re trying to flush out specific cards, such as the queen as spades.

3. Keep the ace of clubs 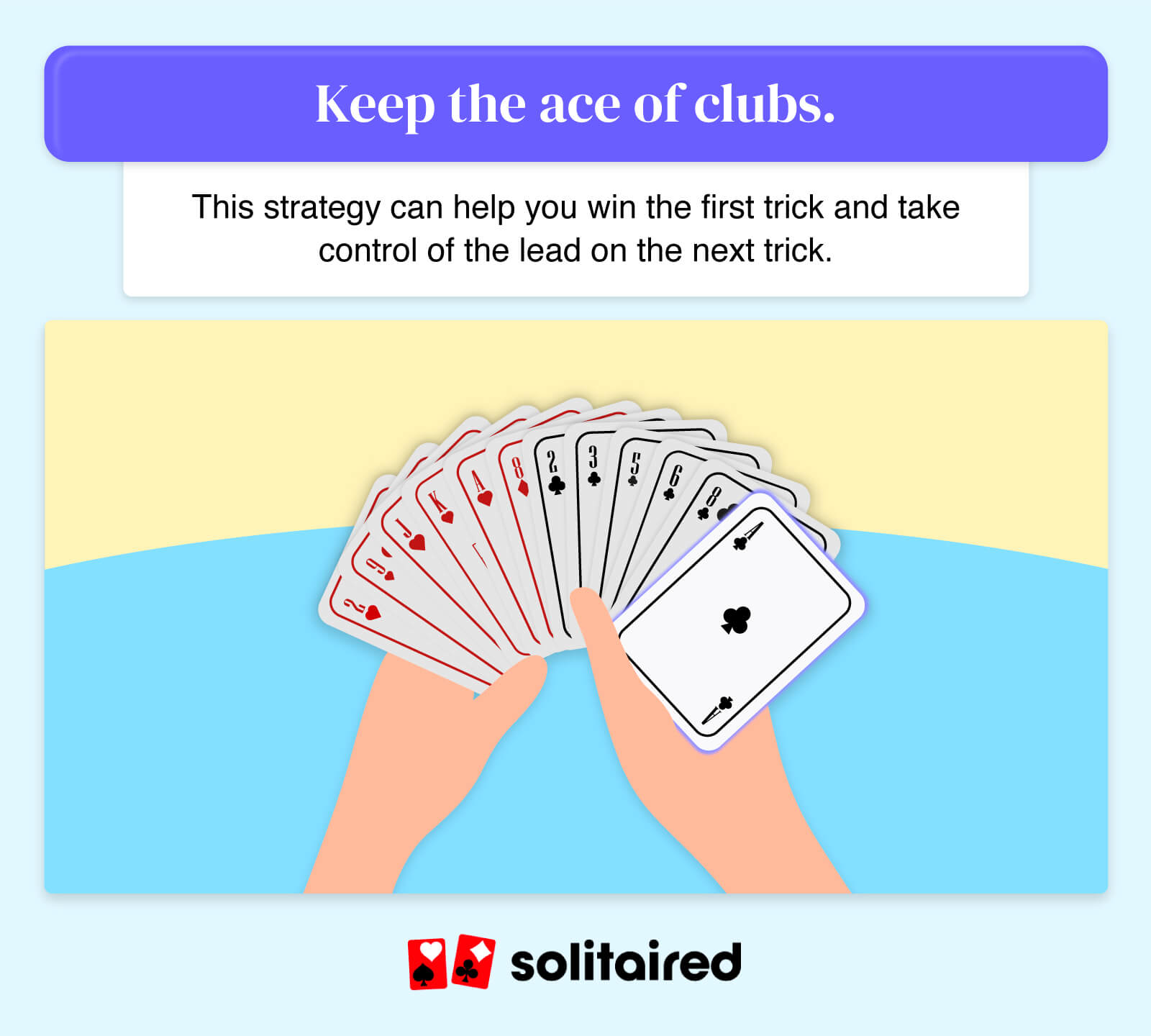 Since the two of clubs leads the game, keeping the ace of clubs means you can win the first trick and take control of the lead on the next trick. Because no penalty points get played, you can win a trick and control the game without risking any penalty points. You can use your lead in the second trick in several ways:

If you don’t have any low cards to lead on the second trick, you can use this trick to lead a higher card, as long as it’s not the king of spades or ace of spades. Leading those may have you winning a trick that contains the queen of spades. In the first two tricks, unless another player has voided a suit, you can lead a high card and be fairly safe that everyone has something of that suit to play. While it’s a risk, it’s a lower risk in the second trick than in subsequent tricks. In fact, your risk may pay off by handing the lead back for the third trick, too.

4. Lead with a spade 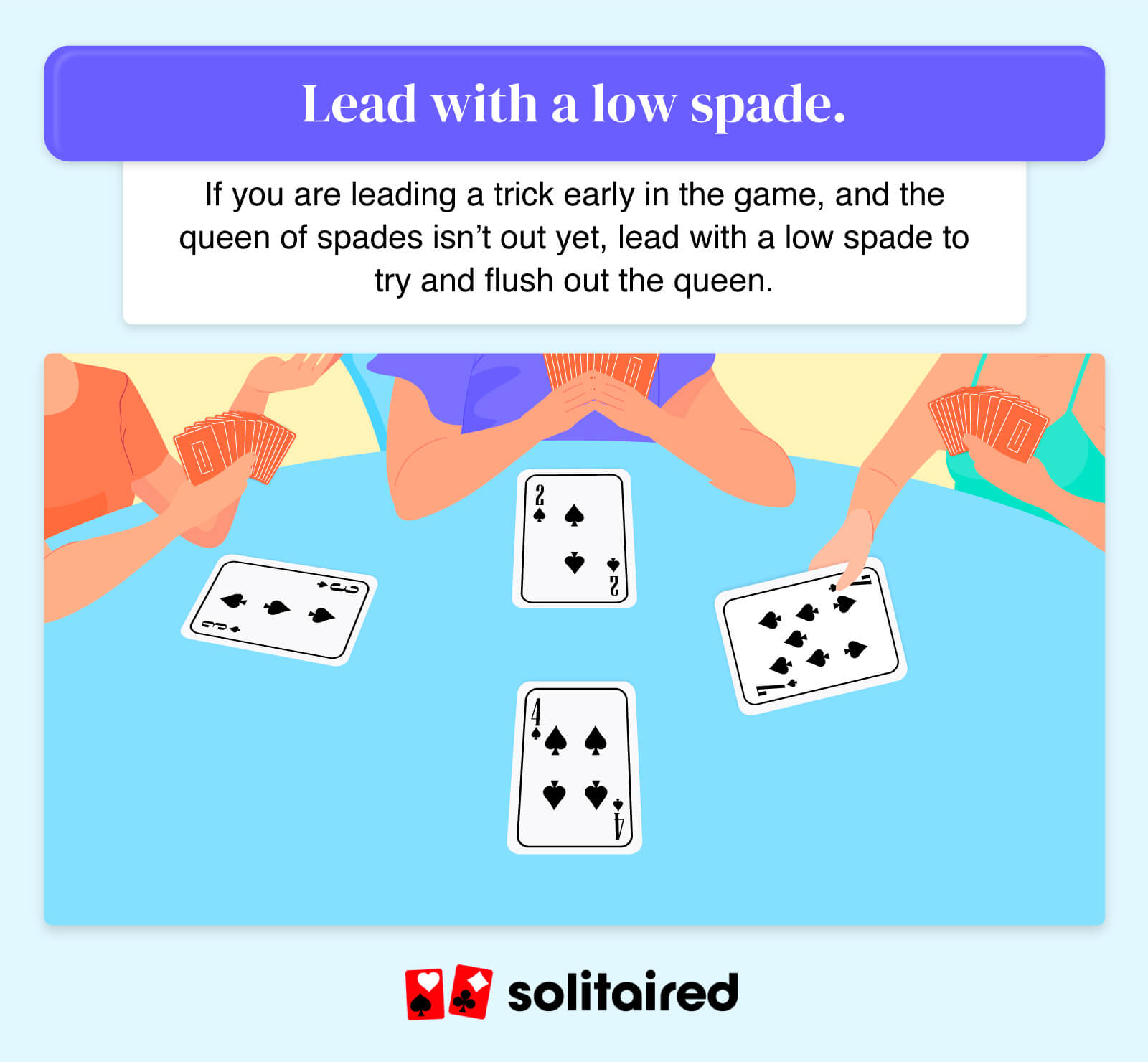 While the game of hearts starts with the two of clubs, and clubs and diamonds are at play in tricks, they aren’t worth any penalty points. Spades are a little more complicated. While most cards in the suit aren’t worth penalty points, the queen of spades is worth 13. That makes the queen worth avoiding.

Leading with a lower spade card can help flush out the queen of spades before someone plays it on you. You can, of course, get stuck with the queen if you play the ace or king of spades. However, if players “slough off,” meaning they play an off-suit because they don’t have a card in the suit being played, you risk taking the queen of spades even if you don’t lead spades.

So leading spades as soon as possible helps get the queen played early in the game. While leading with a spade card can be a good game strategy, don’t lead with the queen of spades—unless you’re shooting the moon and you know the king and ace have been played. 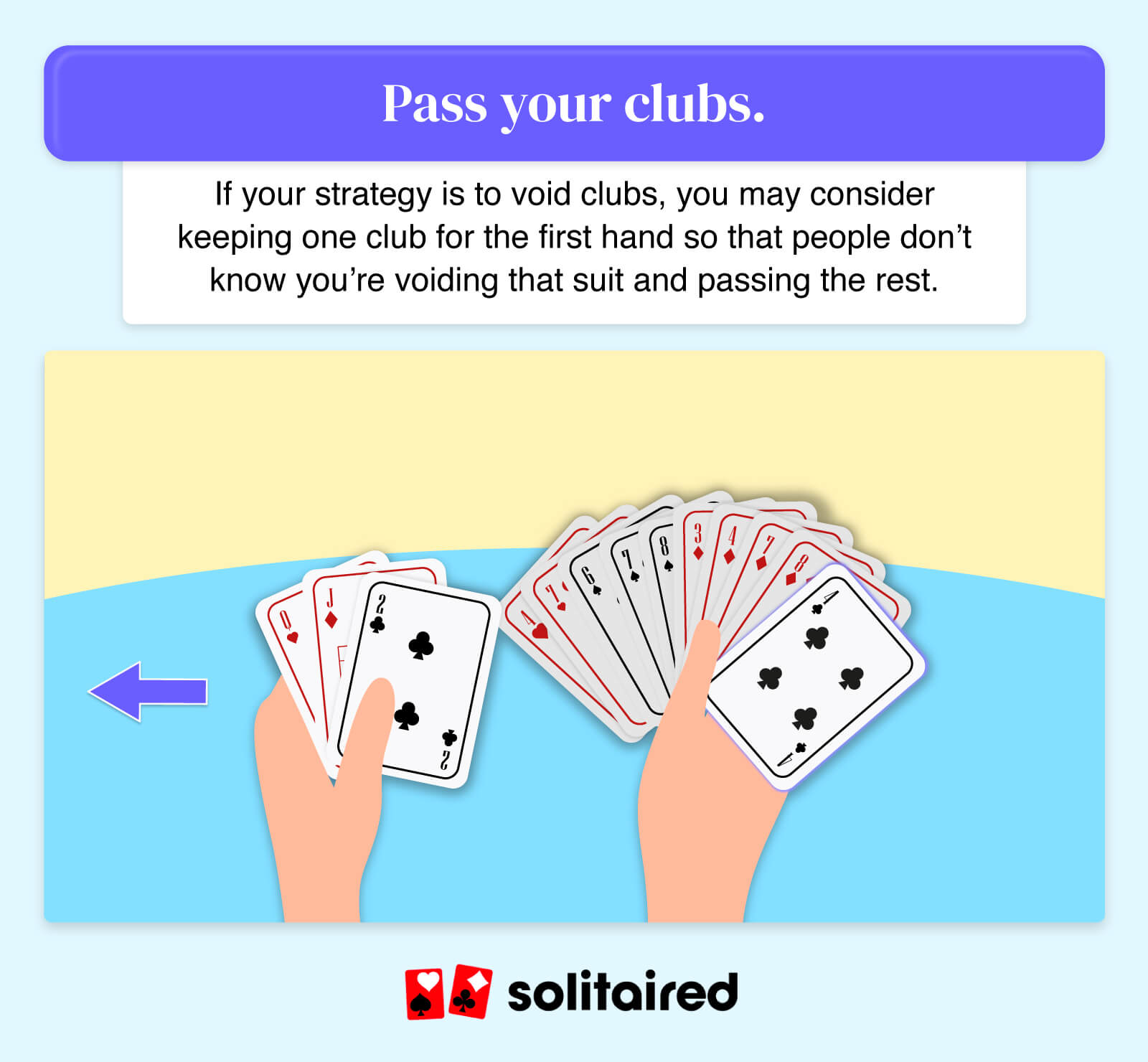 Even if you don’t have the queen of spades, voiding clubs allows you to play hearts, high cards in other suits, or get rid of the ace and king of spades so that you don’t end up with the queen.

6. Keep the ace of hearts 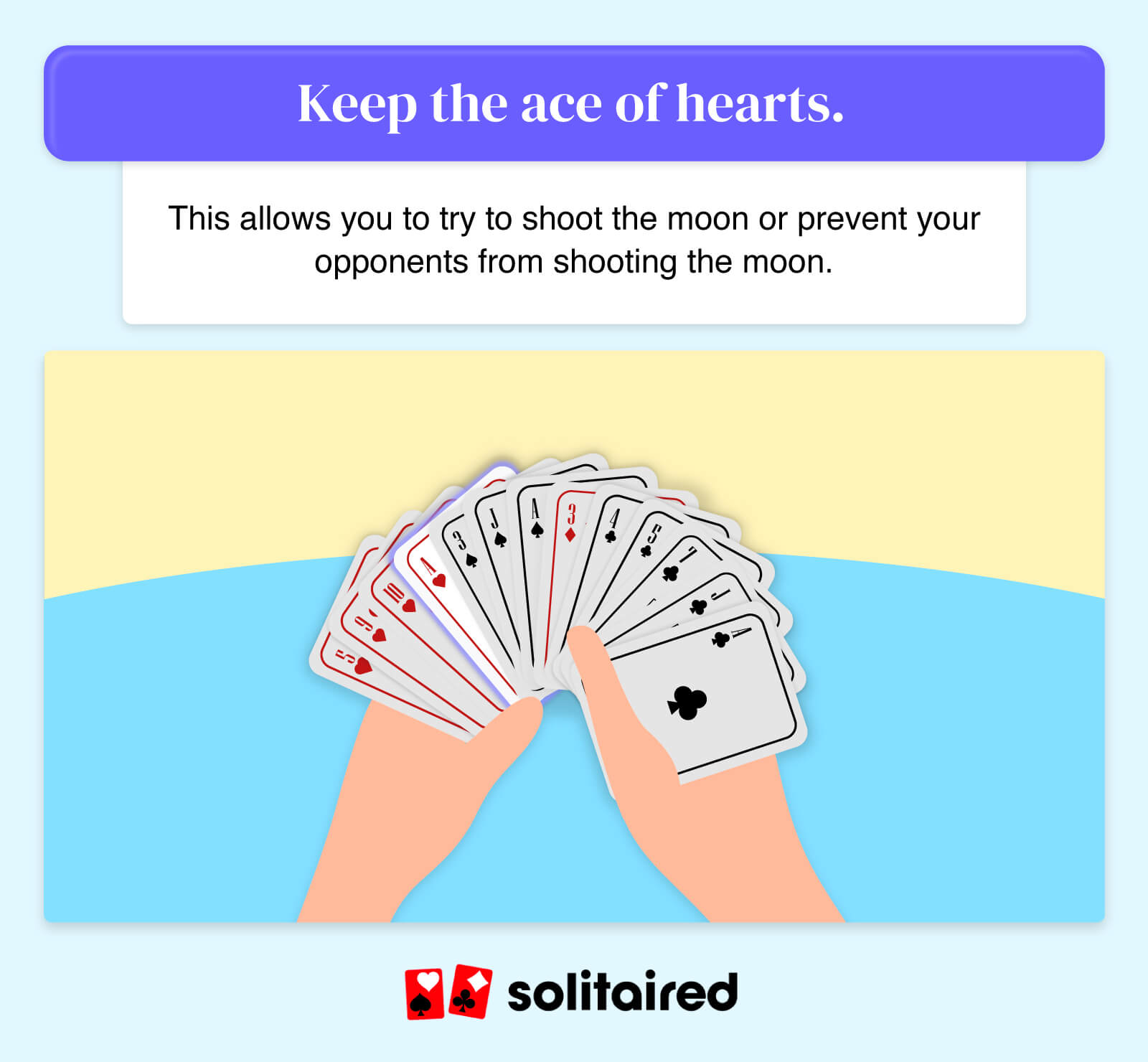 Depending on your game strategy, you may want to keep the ace of hearts. If you’re trying to shoot the moon, it’s much easier to do so if you have this card. If you want to prevent one of your opponents from shooting the moon, holding onto the ace of hearts is essential. Once you see someone taking points and controlling the lead, they are likely trying to shoot the moon, especially if they’re leading high hearts. While playing the ace will get you at least two penalty points, it’s better than 26 if your opponent successfully shoots the moon. If you notice that no one can shoot the moon, play the ace when sloughing off from another suit. 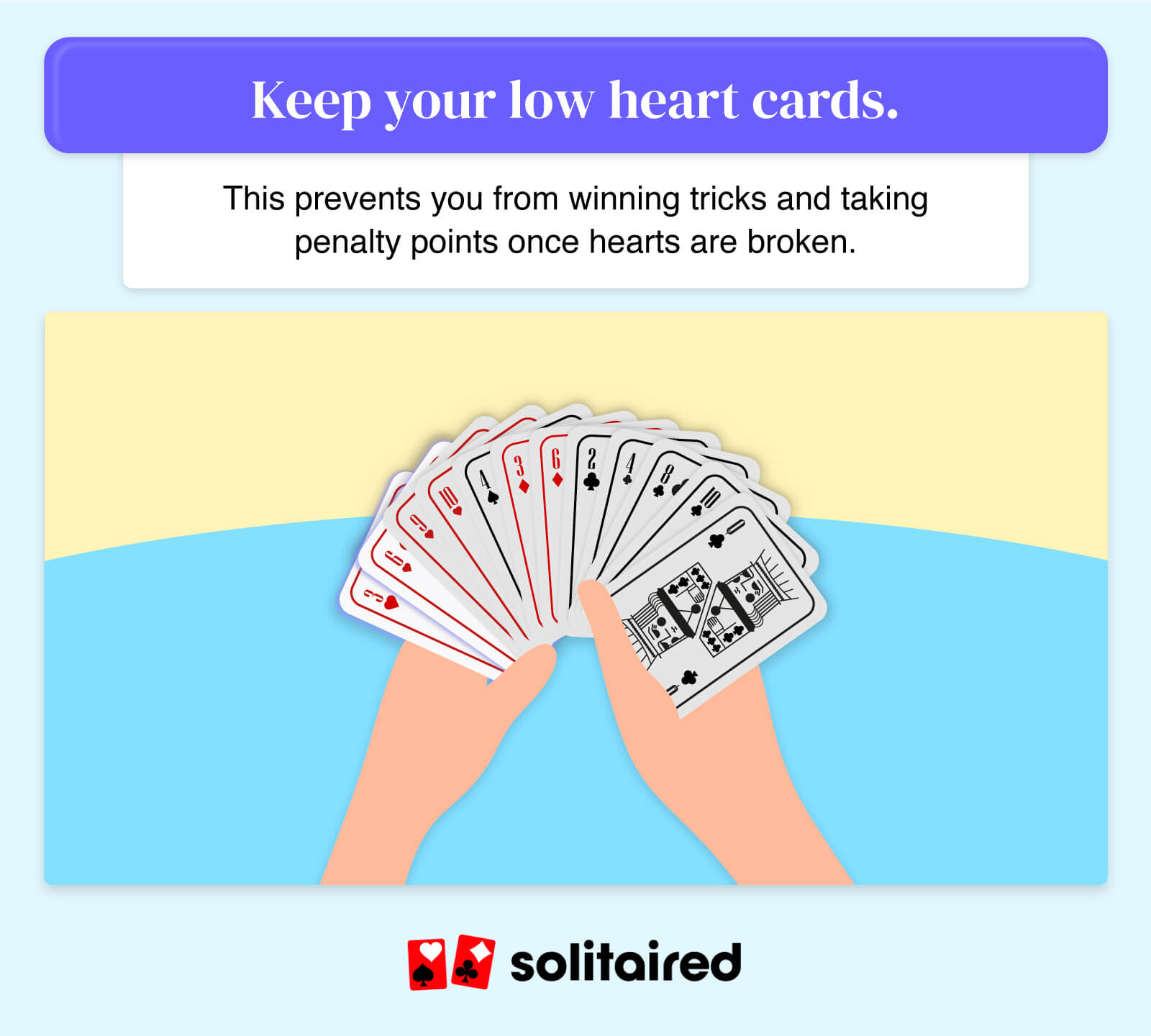 You can’t lead a heart unless you have no other suits left or hearts have been “broken.” If someone sloughed off with a heart, hearts are broken and can be led no matter what you have in your hand. So if someone leads hearts, high hearts cards would win tricks. Having low hearts to play during these situations gives you a chance to protect any high hearts you’re stuck with. You can play low hearts when hearts get led and slough off high hearts when a different suit leads.

Passing your high hearts may also be wise unless you’re trying to shoot the moon. 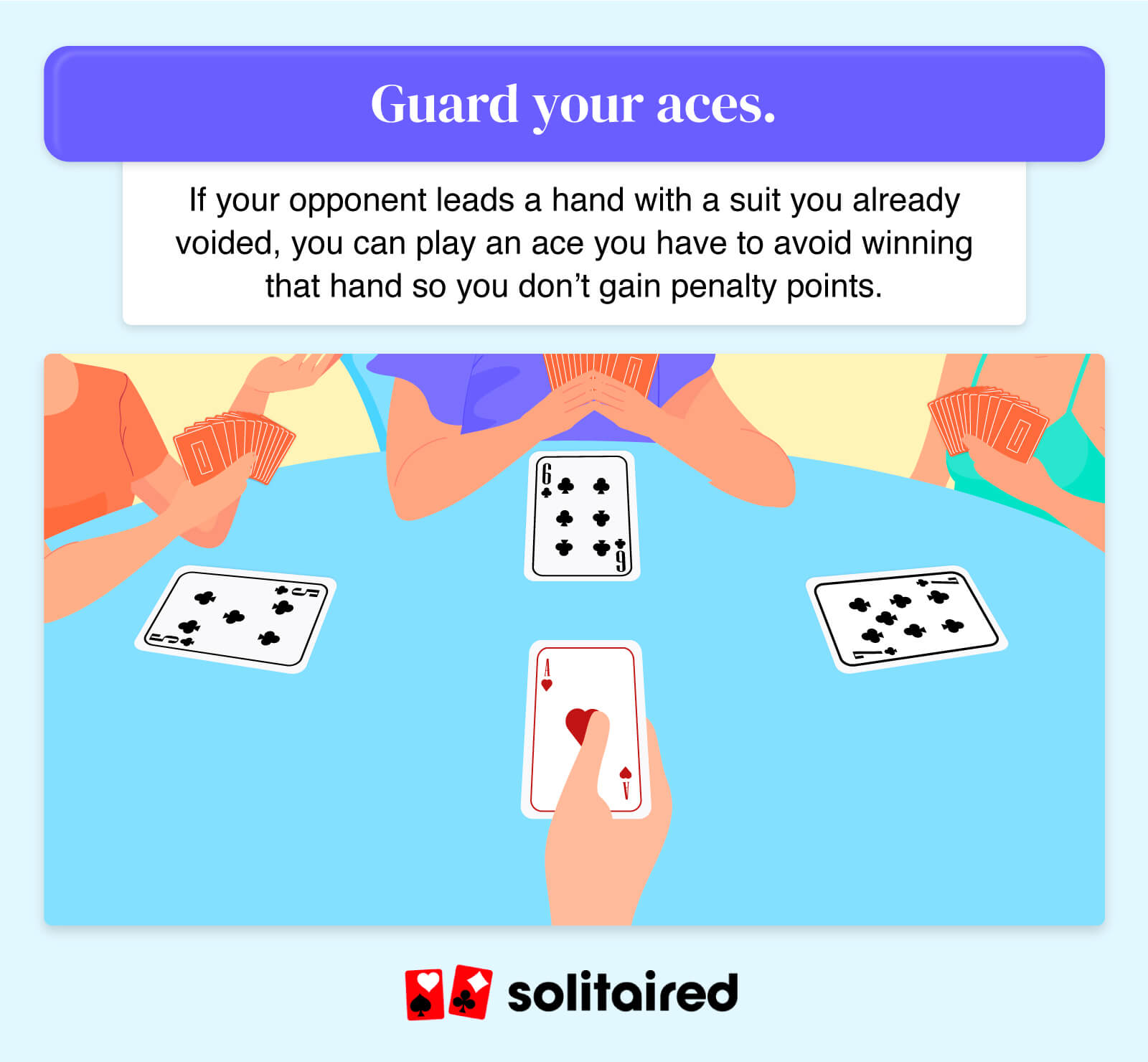 Since aces are the highest cards in the game, leading with an ace means you automatically take the trick, which may mean taking penalty cards. As the round continues, your chances of taking penalty cards with aces increases. To avoid taking penalty cards, play your low cards that share the same suit as your ace when that suit is played. That way, you’ll be less likely to win the trick. This process guards your ace from earning you penalty points. When a player leads a suit you have already voided, you can play your ace as an off-suit play, guaranteeing you won’t win the hand.

9. Get rid of clubs or diamonds early 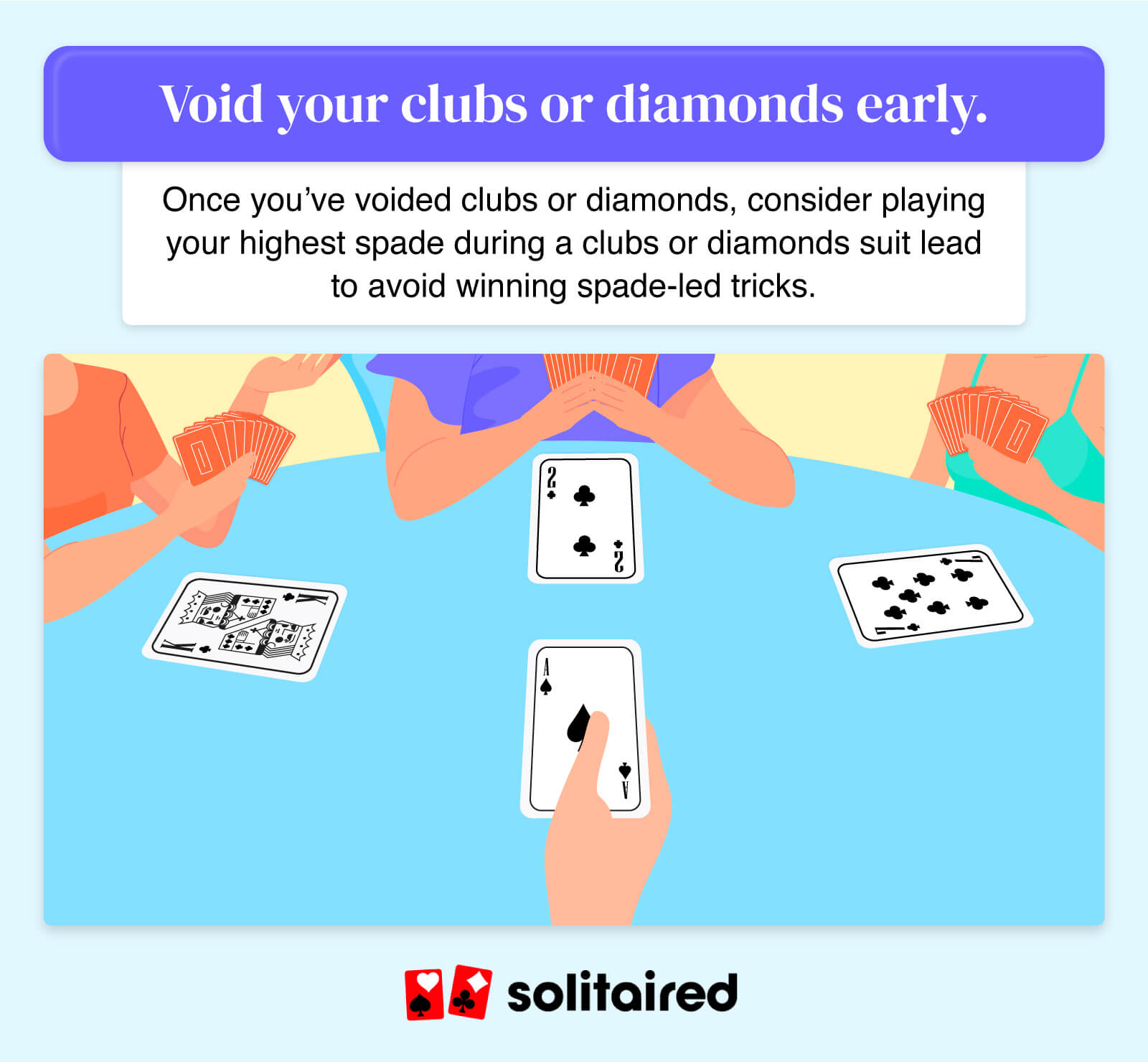 Getting rid of your high cards in clubs or diamonds is a game strategy known as voiding or short-suiting. The two of clubs is always played in the first trick, and players must follow suit. If a player doesn’t have any clubs to play, their only option is to play a diamond or spade (but not the queen of spades), since no penalty cards can be played in the first trick.

Voiding your highest diamonds, clubs, and spades—just don’t lead or take tricks with the ace or king of spades—early on in the game can help you avoid winning tricks later on when penalty cards are in play. If you void a suit, and that suit is led, playing off-suit means you won’t win the trick because only the highest card for the suit played in the trick can win.

10. Recall cards that have been played 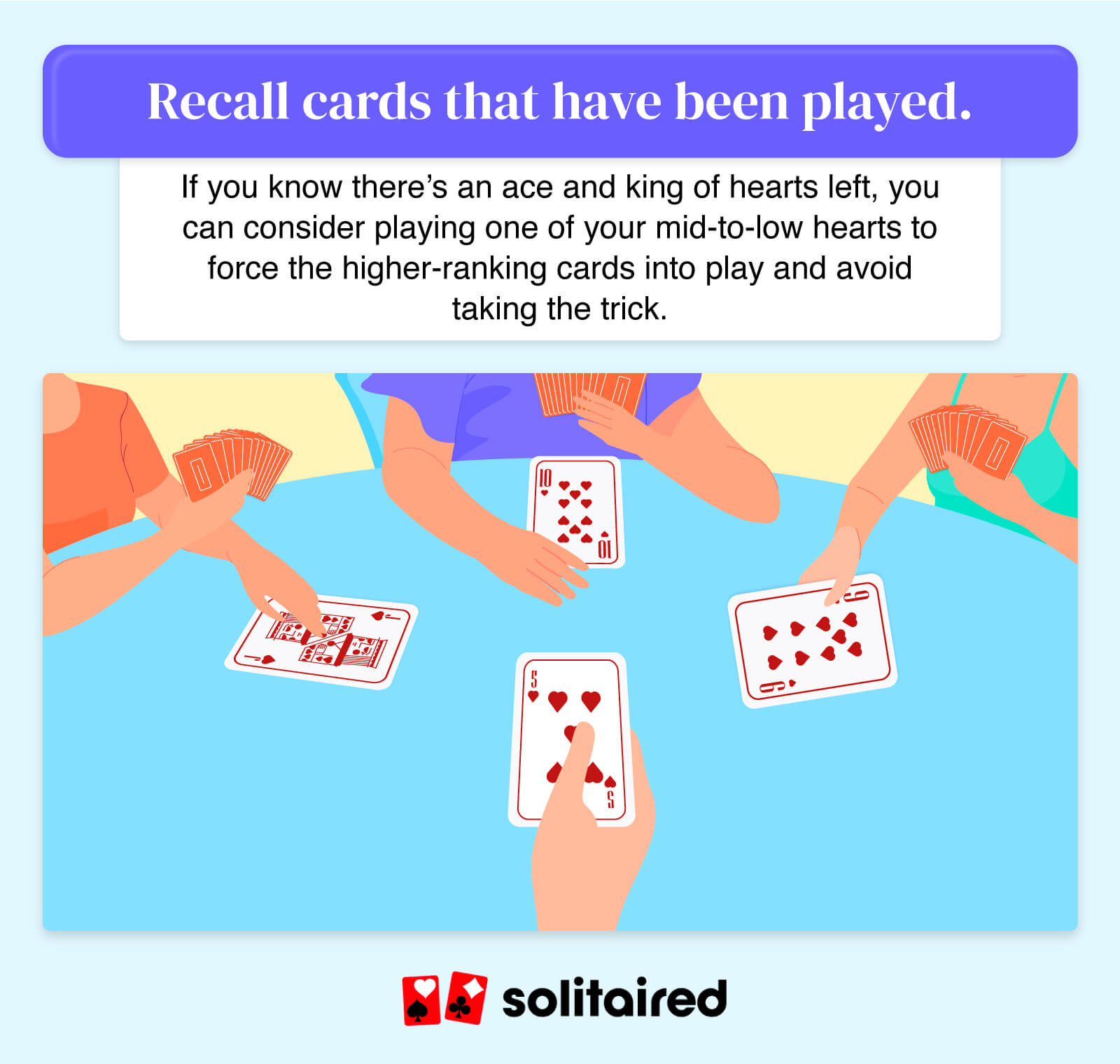 In any card game, paying attention to what your opponents play is important. Keeping track of what tricks they’ve won and what cards they’ve led can help guide your Hearts strategy. Having a sense of what cards your opponents have not only helps you play your cards in a way that will avoid taking tricks but also gives you some insight into what their game strategies may be.

If you know, for example, that hearts have been played in multiple hands, but that the ace of hearts and king of hearts haven’t been played yet, you can try playing a mid to high heart card in the next trick to force those cards into play and avoid taking the trick.

The next time you play Hearts, give these strategies a try. We hope they help you win.