6 of the Best Trick-Taking Card Games 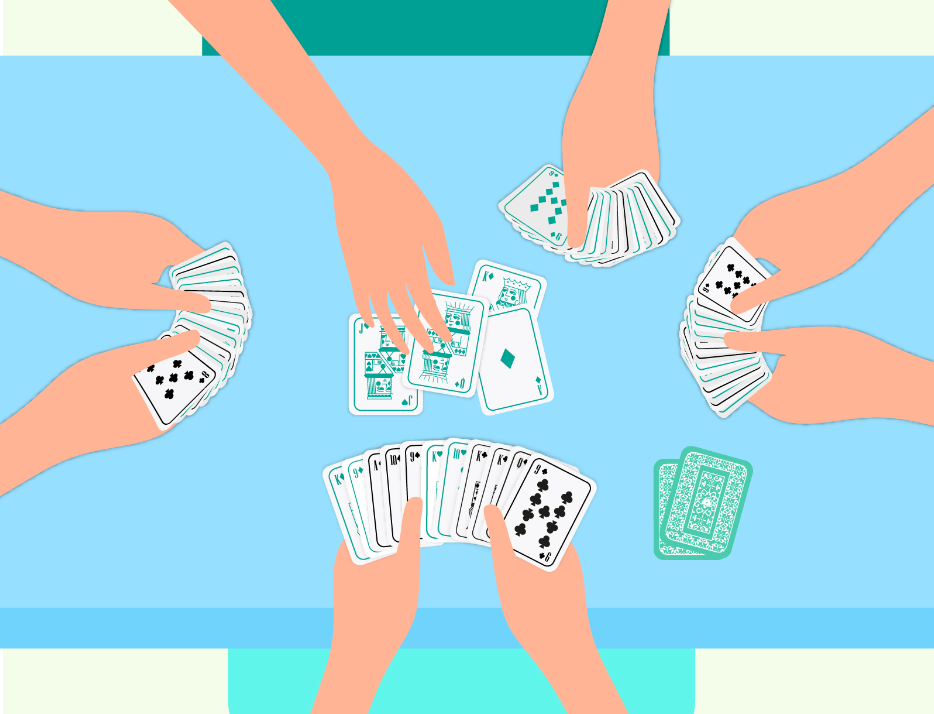 Trick-taking games are engaging games that employ strategy like a board game but offer a more casual atmosphere, typically requiring just a standard deck of playing cards–or just part of the deck–to play. Although each game has its own rules and variants, many of these games share some basic elements, like taking tricks, using trump, and playing with partners.

Taking a trick refers to how each player takes a turn playing a card and the one with the highest ranking card wins. However, what makes these such great games is the use of trump, which makes taking tricks, well, tricky. At the start of most games, players typically select one suit to be trump—meaning any card of that suit has a higher rank than any card of any other suit.

Most games can be modified for any different number of players, but many trick-taking card games are best played by four players to make use of partnerships so that you play as a team.

If you want to learn more about trick-taking card games, this post gives you the details for game rules, set up, and playing through a hand so that you can enjoy the strategy and fun of taking tricks and trumping your opponents.

While versions can play with fewer than four players, euchre works best when played with four people, with two partnerships. Using a trump suit every hand, players try to get as many tricks each hand as possible for their team. 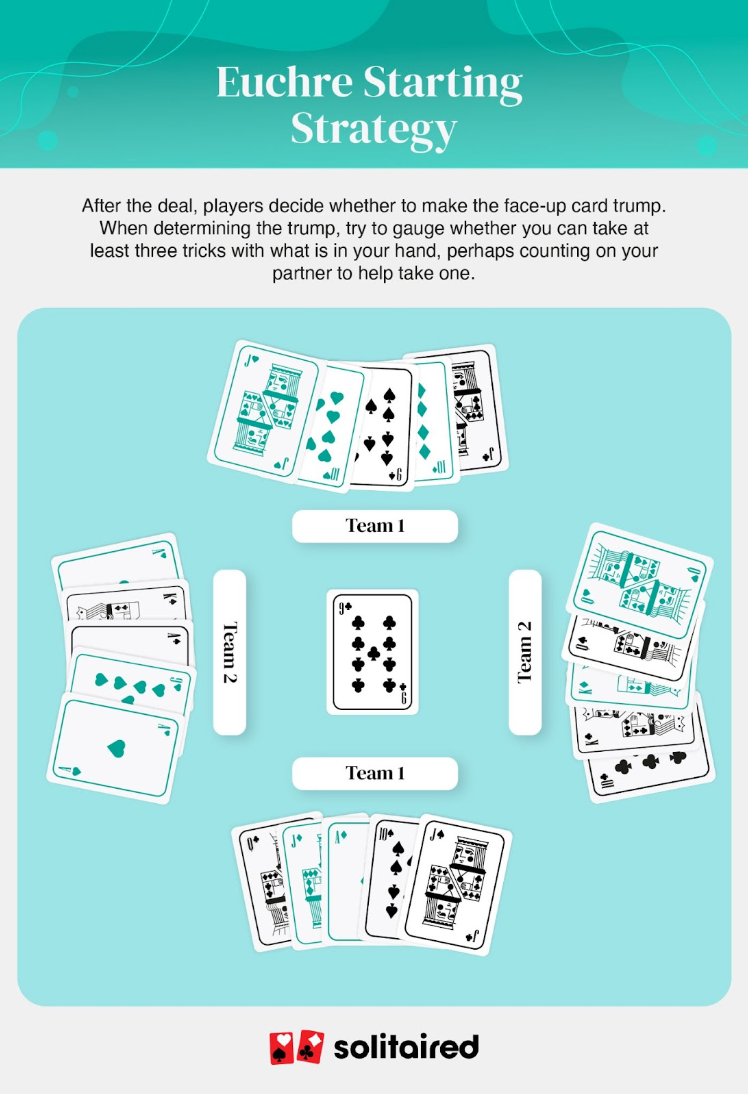 Deck: Tens through Aces of each suit (although other variations use different deck sizes)

Game setup: For each hand, the dealer deals clockwise to each player, dealing cards in amounts as follows—two, three, two, three, and then three, two, three, two so that all players have five cards. Then the top card of the remaining stack is flipped up on top of the stack. Partners sit across from each other.

A euchre hand has two phases. You must first determine trump, and then play the hand. Determining trump may take two passes around the table, but bear in mind that if you or your partner call trump, you need to take the majority of tricks because if you don’t, you get “euchred” and allow the other team to score.

In the first pass, the player to the dealer’s left decides whether to make the face-up card’s suit trump or passes.

If the dealer turns down the card, then each player, starting to the dealer’s left, gets a turn to make any suit trump except the one the dealer turned down. If the player passes, the decision passes to the next player until it finally reaches the dealer. If trump isn’t made by the dealer in the second round then a new hand is dealt by the next dealer.

A player may decide to “go alone,” meaning their cards are so good, they think they could take all the tricks without their partner’s help. If that happens, the player can only say they’re going alone during one of the rounds of deciding trump, and they must be the one calling trump.

Once trump is decided, play begins:

If the team who called trump:

If the team who didn’t called trump gets three or more tricks, this is considered “euchre,” and they get 2 points.

If the person who went alone

Hearts is best played with four players. As the name may indicate, you play with the hearts suit as trump in every hand, which makes this a quick dealing, quick playing game. Because certain cards have point values, hearts is considered a point-trick game. 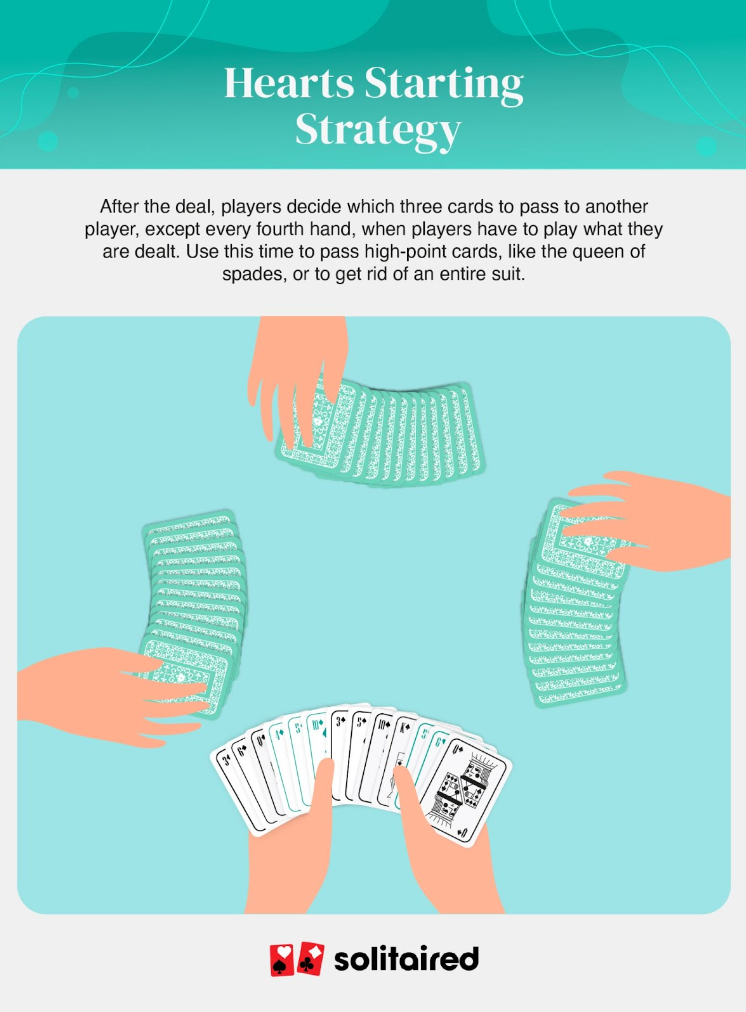 Objective: The player with the lowest score wins after one player reaches 100 points.

Game setup: The dealer deals 13 cards to each player.

Card rank: Hearts rank highest as the trump suit for every hand, and rank for all suits is aces high, twos low.

After the deal and before the hand is actually played, a pass occurs where each player passes three cards of their choosing as follows:

Once the pass is finished, the gameplay begins:

After each round, each player counts their points as follows:

If one players takes all the hearts and the queen of spades, for a total of 26 points, this is known as “shooting the moon.” The player who shoots the moon deducts 26 points from their score. If their score is too low to subtract 26 points (for example, they only have 13 points so far), it adds 26 points to each opponent’s score.

Spades is similar to hearts in that one suit—spades—is always trump, but you play spades with partners and bid how many tricks you think you will win. Although you can make adjustments for different numbers of players, a four-player game works best for spades. Be sure your team tries to match your bid each hand; otherwise, too many tricks over your team’s bid could penalize you. 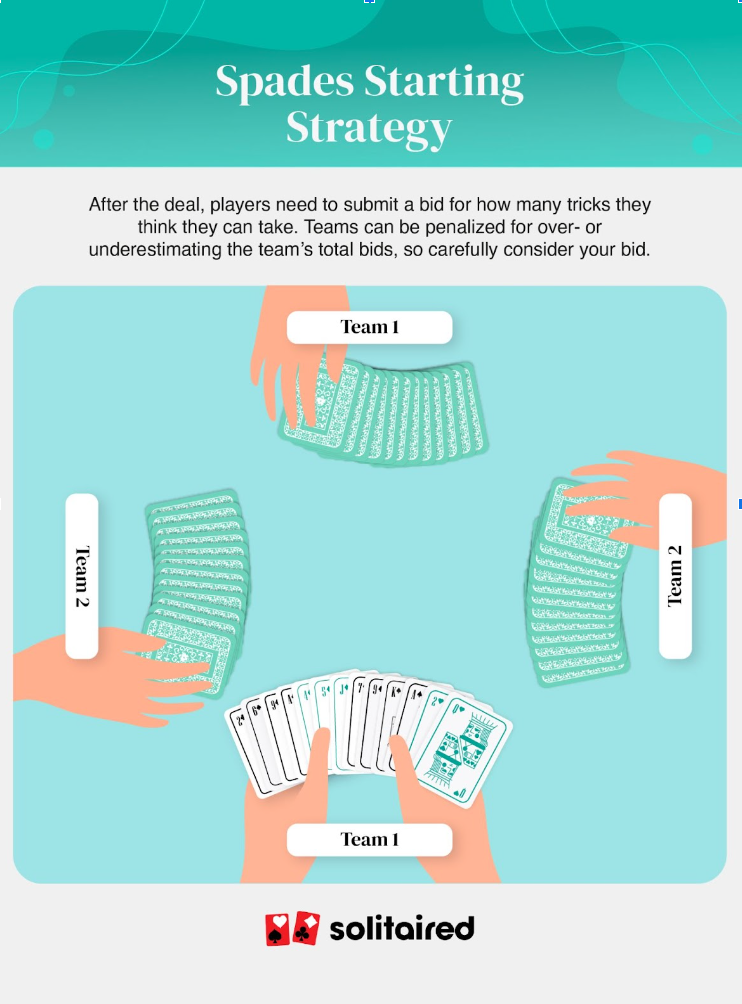 Objective: The first team to 500 wins.

Game setup: Dealer deals 13 cards to each player, and partners sit across from each other.

Card rank: Spades rank highest as the trump suit for every hand, and rank for all suits is aces high, twos low.

You play with partners in pinochle and follow two phases for scoring—meld and the trick-taking phase, which is called pinochle. Because this game has a few more steps and scoring rules than other card games, pinochle makes a good next step if you want to increase the challenge and strategy of partnership trick-taking games 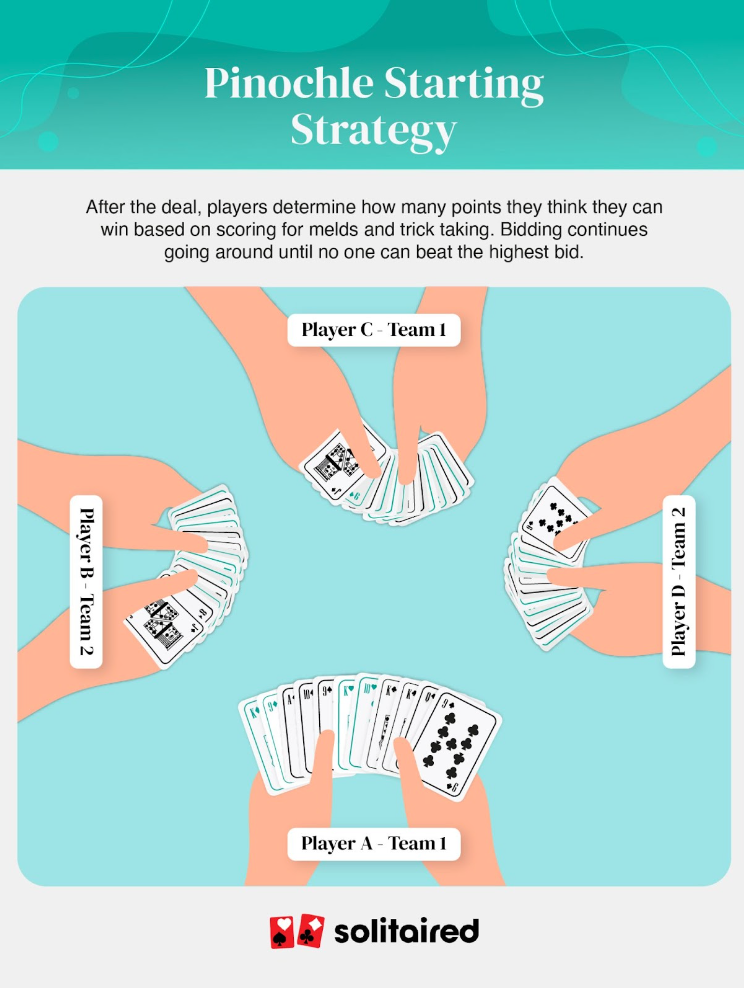 How to deal: Each player gets 12 cards dealt four at a time. The top card of the draw pile is flipped face up and the suit of that card will be the trump suit for the round.

Best with four players, you play whist with partners sitting across from each other. If you’re not familiar with trick-taking games, whist makes a good start. Using just a single deck of cards, you get used to following trump, playing with a partner, and taking tricks without needing to call trump or make bids. 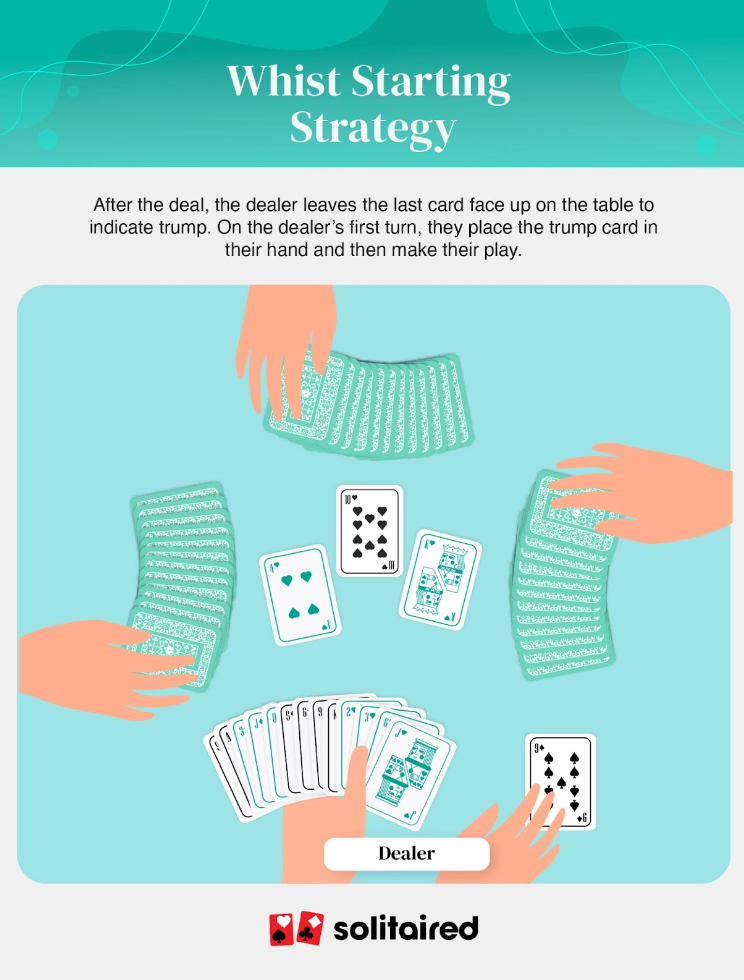 Game setup: Deal 13 cards each with the dealer flipping up the last card instead of dealing it out, which is trump. During the dealer’s first play, they put the card in their hand.

Each team adds up their total tricks between partners. What they have above six is their score. So if one team has eight tricks, they score 2 points. The first team to reach 5 points wins.

Oh Hell is a progressive game, where you decrease and increase cards each hand. Although you don’t use partners, this game is best played with four players. This is a good next step after whist because you don’t call trump, but you must make bids for tricks prior to playing each hand. 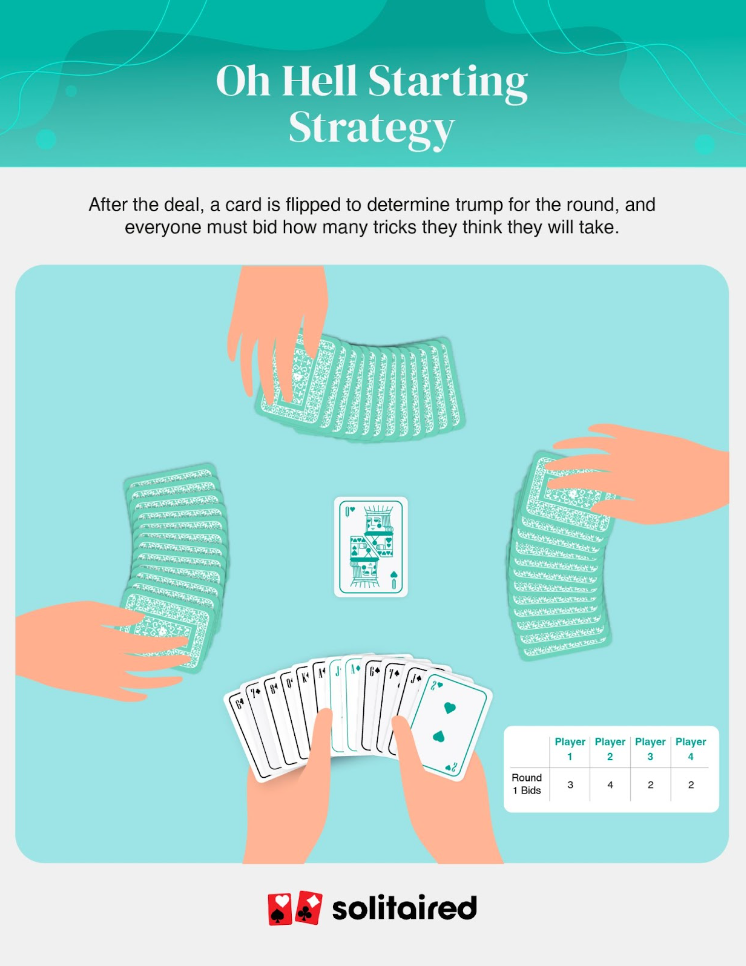 Objective: The player with the most points wins.

Game setup: Play the game in rounds starting with 12 cards to each player and progressing down by one card each round until you deal 1 card each. Then progress back up again to 12 cards. After the cards for the round are dealt, flip up the next card, which then determines trump for that round.

Card rank: Each round contains a trump suit determined by the deal, and for all suits, aces are high, and twos are low.

Modern trick-taking card games like Skull King, The Crew, The Fox in the Forest, and more include many or all trick-taking elements seen in traditional card games. You bid, take tricks, use a trump suit, and play with partners. You just do so with some added flavor from characters and themes. From pirates and mice to astronauts and foxes, modern, themed trick-taking games offer an equally challenging and fun alternative to traditional cooperative card games.

If you enjoy trick-taking games, you don’t have to wait for card night or work to gather the right amount of players. You can play a variety of trick-taking games anytime you like online at Solitaired. You can brush up on strategy, play partner games or solo games, and even learn new games all from the comfort of your screen.