LaBelle Lucy solitaire is different from other variants — you can re-shuffle cards, you can only ever move a single top card in the tableau at once, and cleared piles are gone for good. 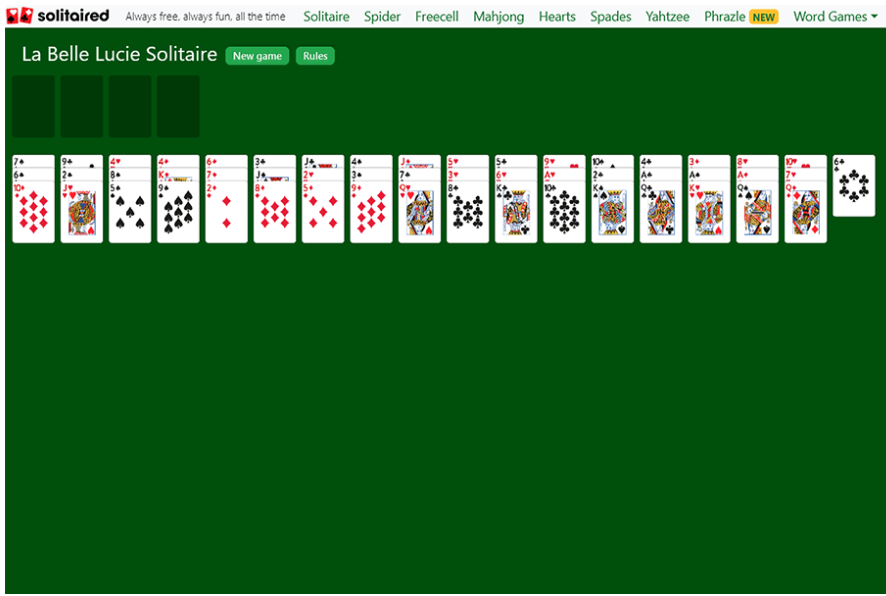 How to Play LaBelle Lucie Solitaire

LaBelle Lucie solitaire is a fan variant of classic solitaire that drastically changes up the rules for a change of pace.

It’s an open game with a few added rules to keep things interesting. But like all games of solitaire, the aim of the game remains the same: move all cards from the tableau to the foundation piles in ascending suit order.

There’s also no stock or waste piles, and cleared piles cannot be used to place new cards –- these piles are useless once cleared.

But that’s what makes this version fun, and at the same time, challenging.

For La Belle Lucy, most of the tableau piles will be fans with only 3 cards per pile. 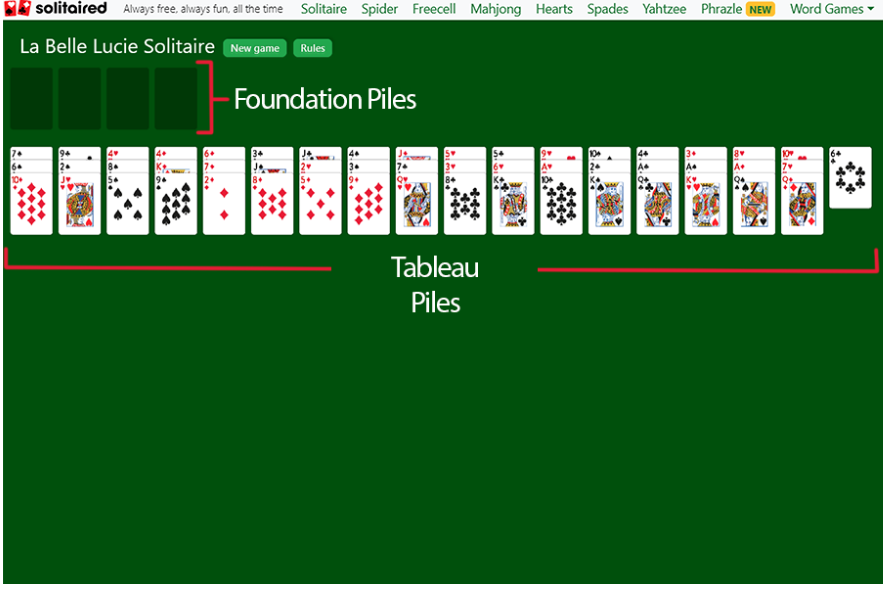 Before starting a new game, shuffle your deck — you should have fifty-two cards total.

Place seventeen piles of three cards face-up and the remaining card, also face-up, forms a pile of its own. These are the tableaus piles.

The foundations begin empty — you will build this suit up in ascending order beginning with the aces.

The object of LaBella Lucie solitaire is to move all the cards from the tableau piles to the foundations in ascending suit order, beginning with the aces and ending with the kings.

For example, you might start with an ace of spades, ending with the king of spades.

You can re-shuffle the tableau a maximum of two times, opening up more moves once you get stuck. 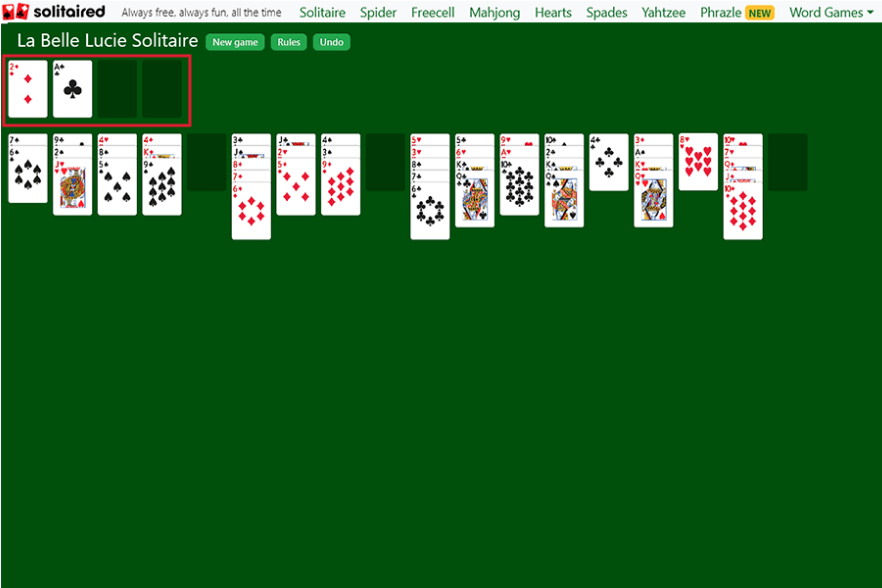 If playing LaBelle Lucie solitaire online, the rules are automatically applied — you won’t be allowed to make any illegal moves.

If you’re old-school and using a physical card deck, then you’ll need to know the rules to actually play… 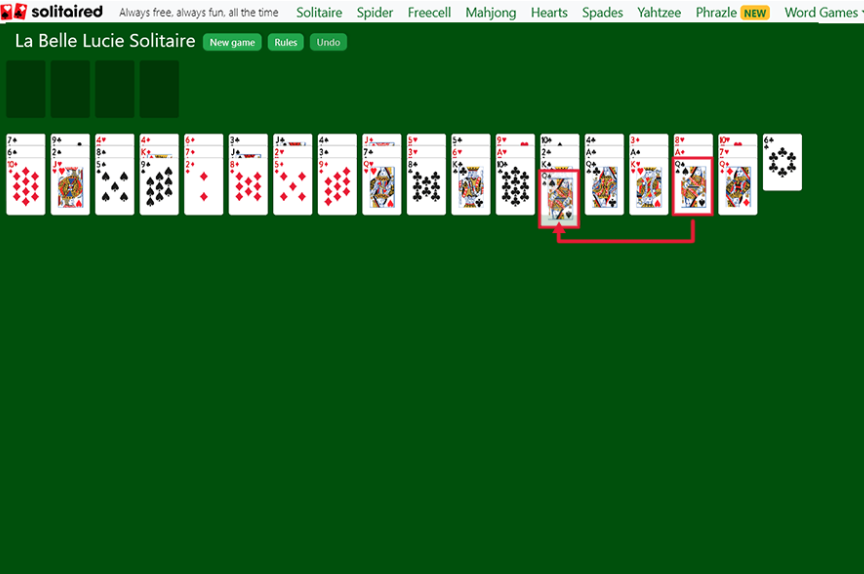 What is a good strategy for LaBelle Lucie Solitaire?

Your regular solitaire strategy might not work as effectively when playing the LaBelle Lucie variant.

There is no need to completely empty tableau piles early. In fact, emptying these can slow down your game or even cause you to become stuck as you cannot place new cards on the empty piles.

You also need to be very aware of all cards in the tableau — you can only make one move with the top card, so you’ve got to make it count.

If you’re looking for a different strategy, you could also try to reveal as many aces as possible in your first round. You’re sacrificing the round to set up the foundations, but it can work well, making the remaining two rounds easier.

Be strategic with the shuffle button.

It’s going to feel really good when you reshuffle those fans. But once you’ve redealt twice, that’s it. Be careful and make sure you’ve exhausted all available moves before redealing.

Whatever strategy you choose, it’s important to remain patient. You don’t want to block any moves, so think through every move properly before making it.

A few popular LaBelle Lucie, including:

To learn hundreds of new solitaire games, check out all our other games!

What are the odds of winning LaBelle Lucie solitaire?

You can win approximately 2 out of 3 games of LaBella Lucie solitaire. For those who love percentages, that’s roughly a 66% win rate.

Who came up with LaBelle Lucie solitaire?

LaBelle Lucie solitaire is classic “patience” game that’s been around for a while. While we’re not sure who created it, the rules were published in 1870 by Lady Adelaide Cadogan.

What are the other names for LaBelle Lucie?

Is solitaire good for brain health?

Solitaire is great for brain health. It not only calms the mind but improves problem-solving and develops strategy skills.

If you’re looking for a totally new challenge, why not try Mahjong? Expose tiles in this pairing strategy game - a breath of fresh air and a change in pace from your regular game of solitaire.