Most of the card prints below have never been put online before. We hope you enjoy them as much as we do.

Evidence suggests early playing cards likely originated in China during the 12th century. These cards may have been influenced by oiled paper strips used for games in Korea. The early Chinese cards were also narrow, but more more card-like in nature, and were primarily used in Mahjong games.

Chinese cards were often categorized by symbol. As playing cards from China made their steady way to Europe, the symbols slowly evolved into the suits, which came to represent social classes, at least in Italy, Spain, and France.

In Europe, playing cards first appeared in the 1300s, with the earliest playing card decks discovered in France. France can also lay claim to starting the modern versions of playing cards. However, with Venice being a major trading center in the 1300s, it's possible that cards originally made landfall there from the East and Near East.

While modern day cards are fairly standardized, the history of card design is one of beauty and diversity. Card designs employed high degrees of craftsmanship and sophistication throughout the centuries. Beyond simply games, cards were used for education, as commemorations, relaxation, and of course entertainment.

In our research at the New York Public Library, we came across amazing 19th century collections of early playing card designs and brought some of the images online. If you'd like to see more digital copies, please send us a note. 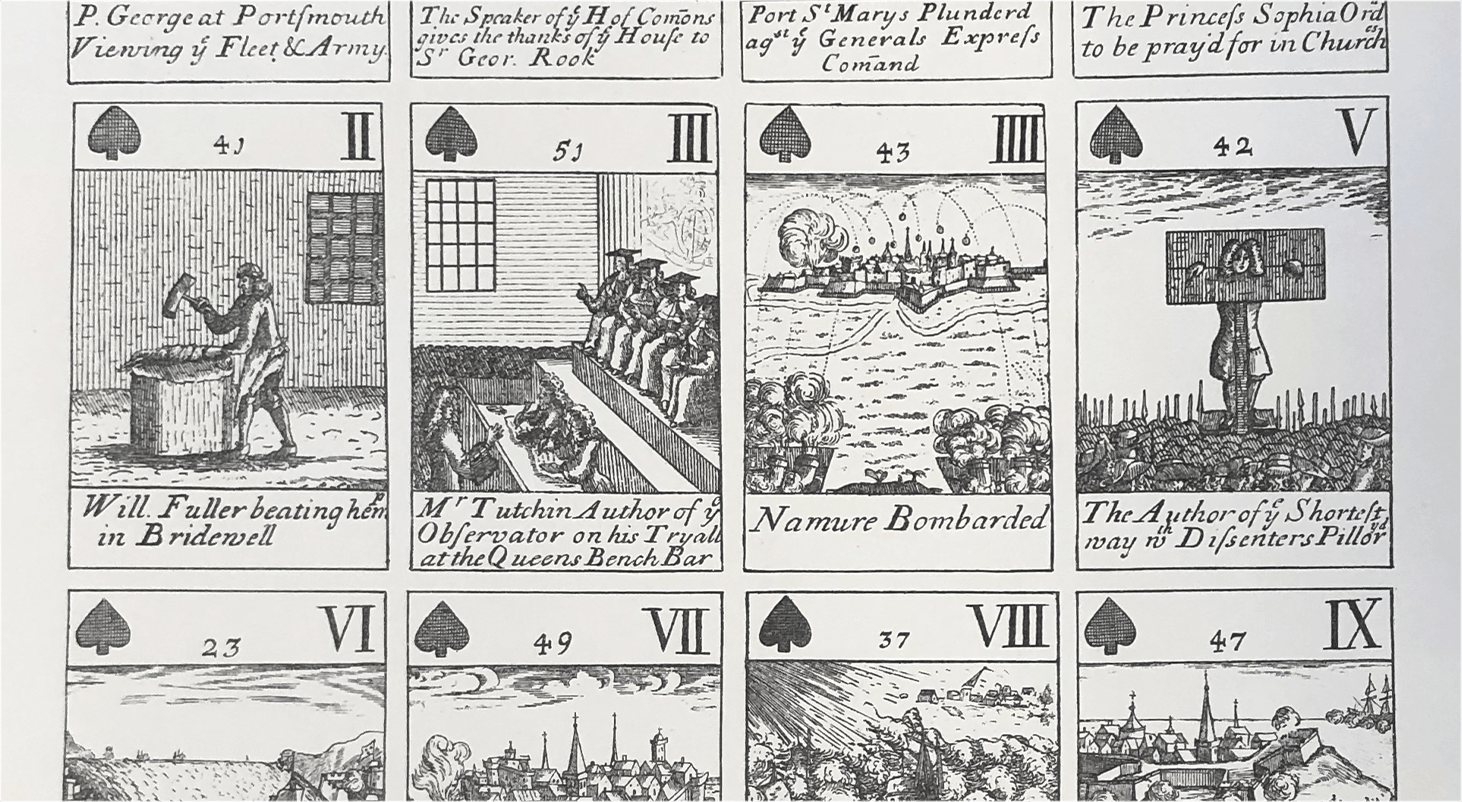 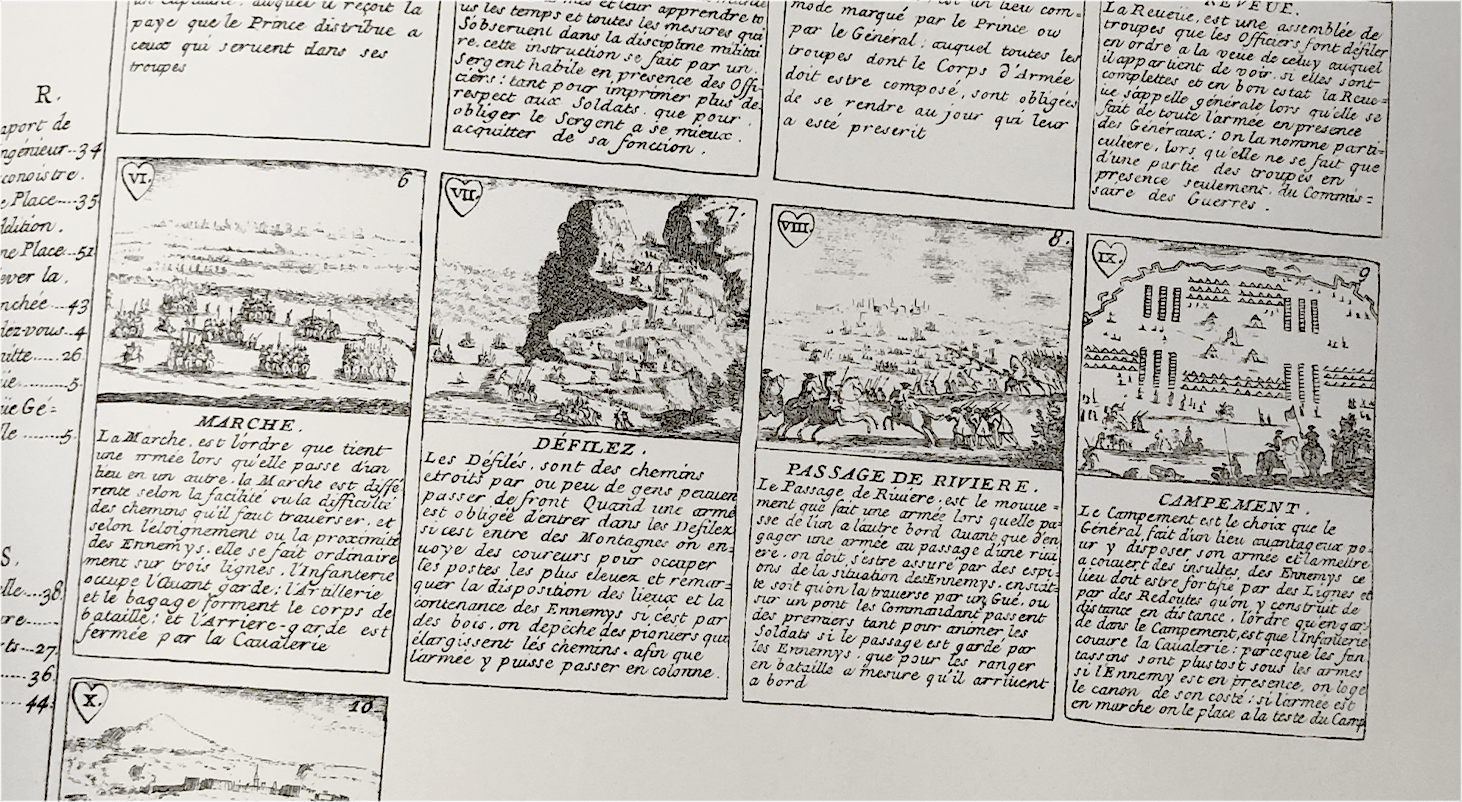 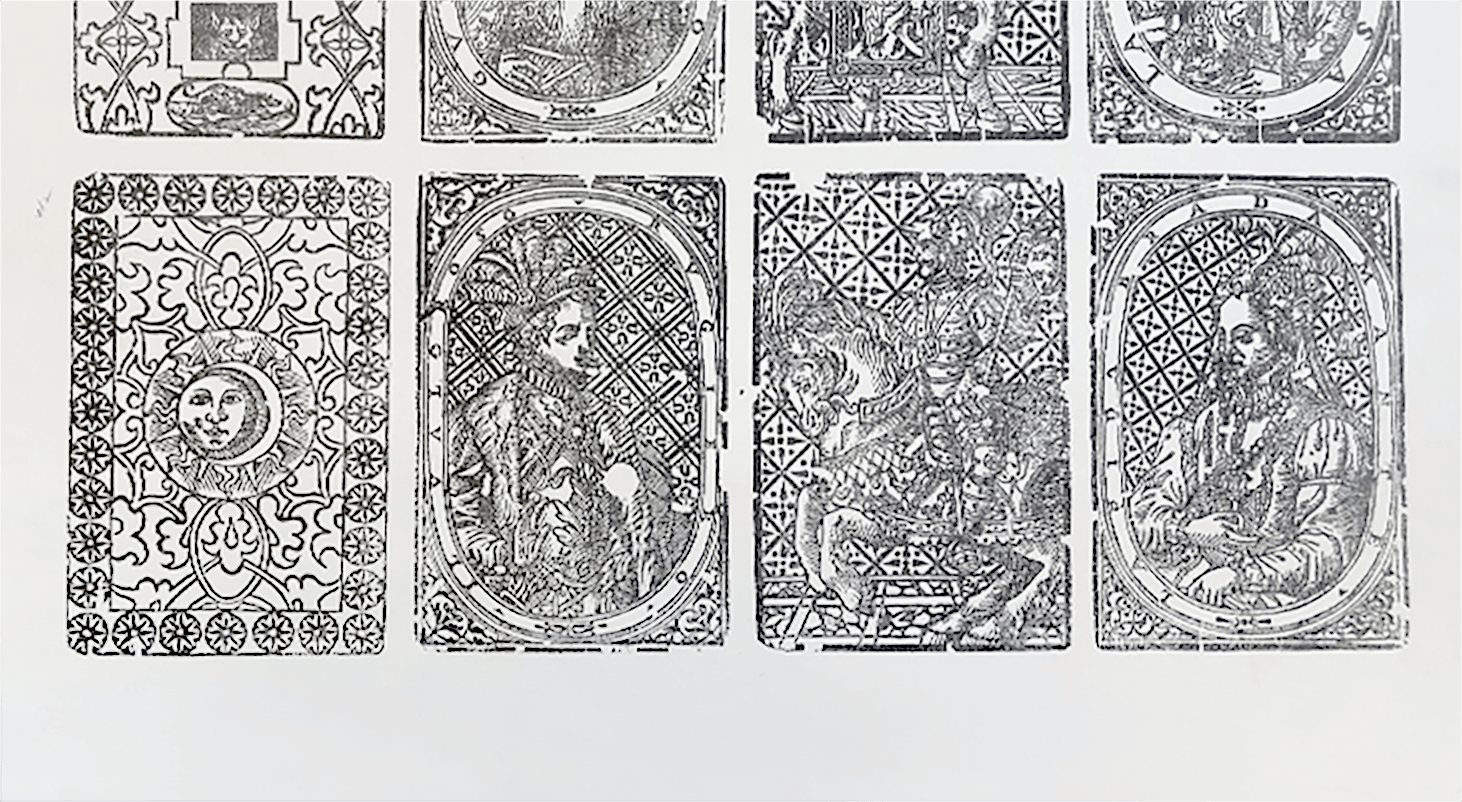 As the 14th century progressed, playing cards began to appearing across continental Europe. As in succeeding centuries, card decks came in many sizes, counts, and compositions, but there were common elements in many decks. 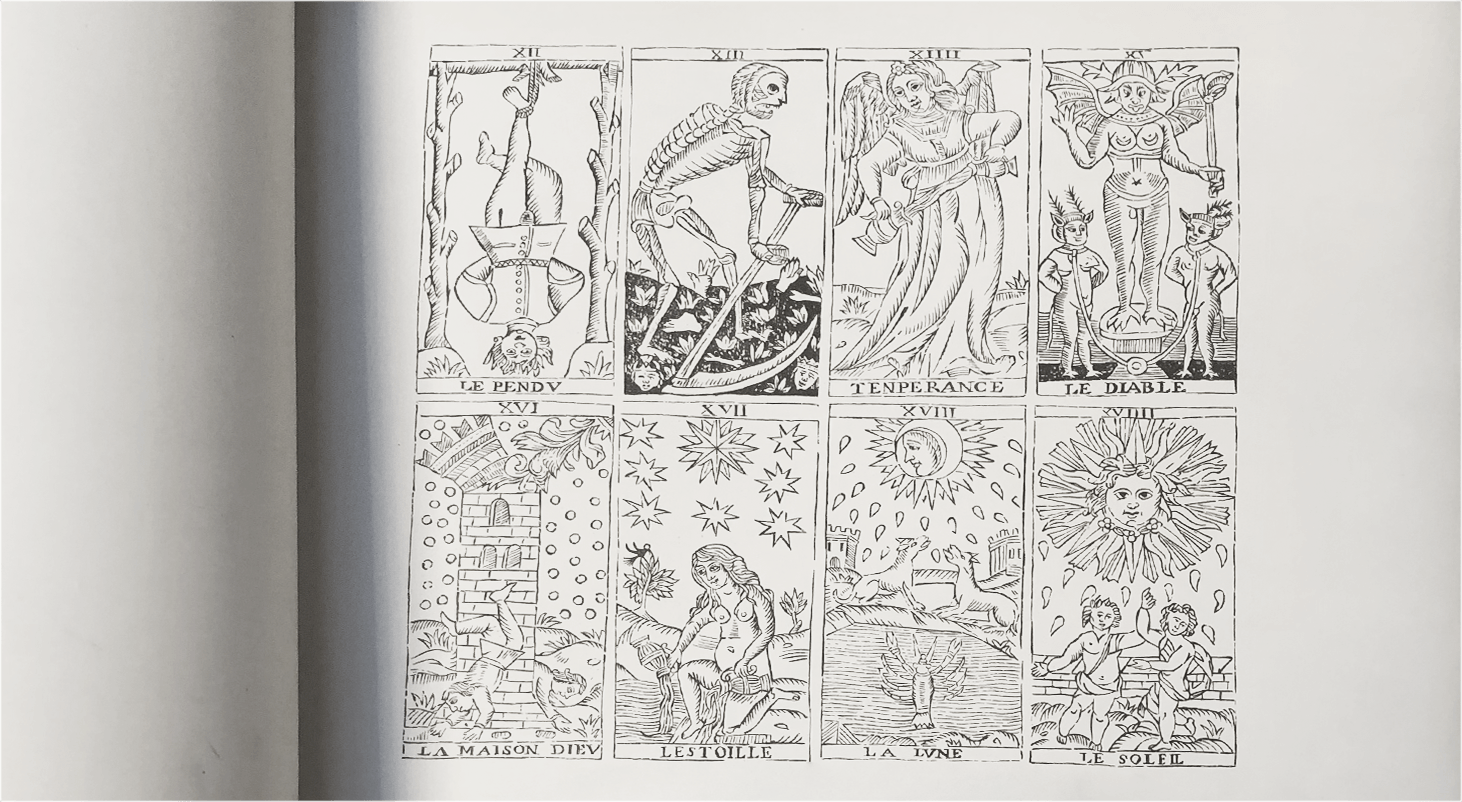 The face cards, or courtier cards, were different versions of kings, queens, and valets (royal helper). In Germany, the Deuce was also given special treatment. 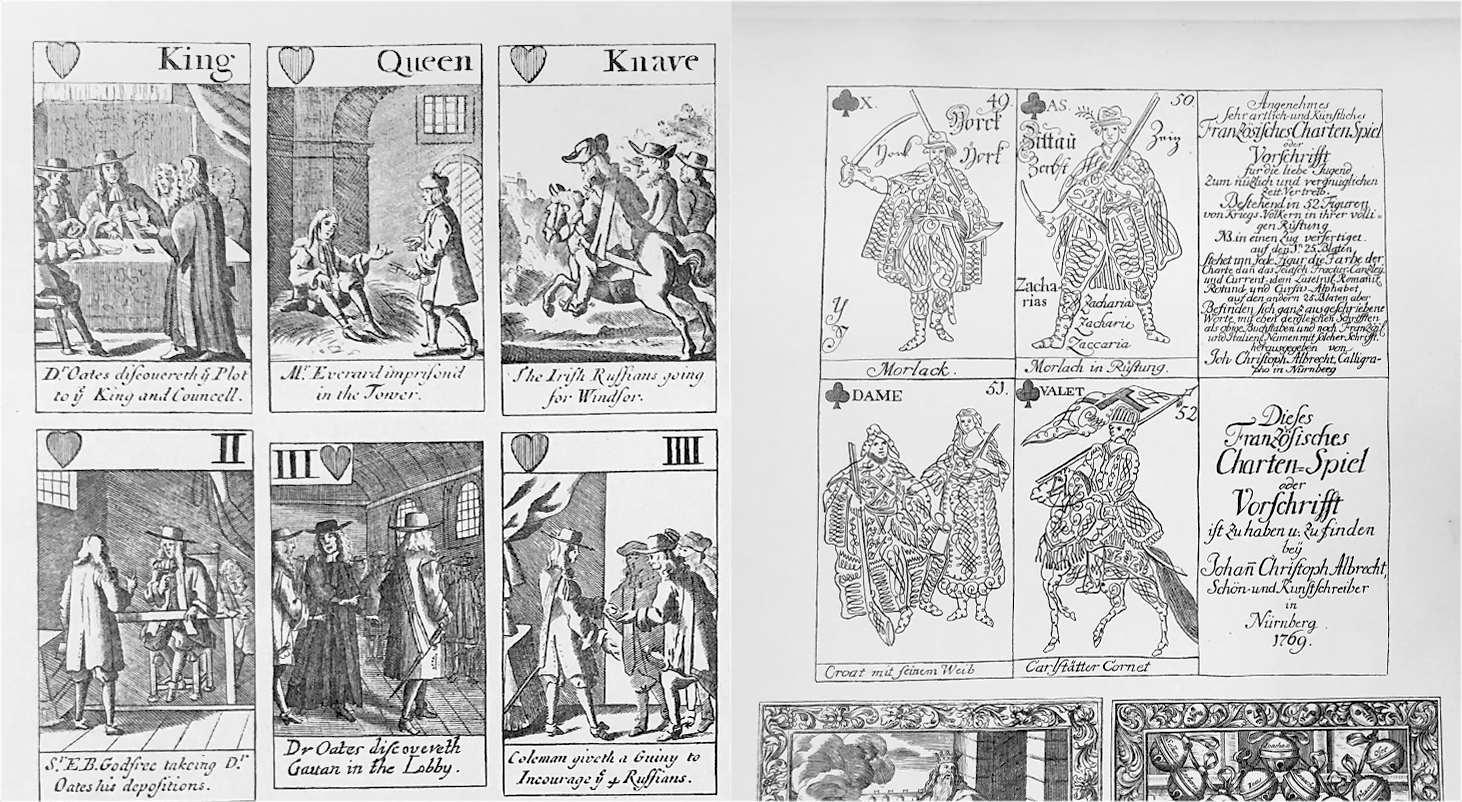 By the 15th century, suits began to coalesce within countries. In Italy, suits were organized by social strata: swords for the noble classes, chalices for the Church, money for citizenry, and clubs for the peasantry. 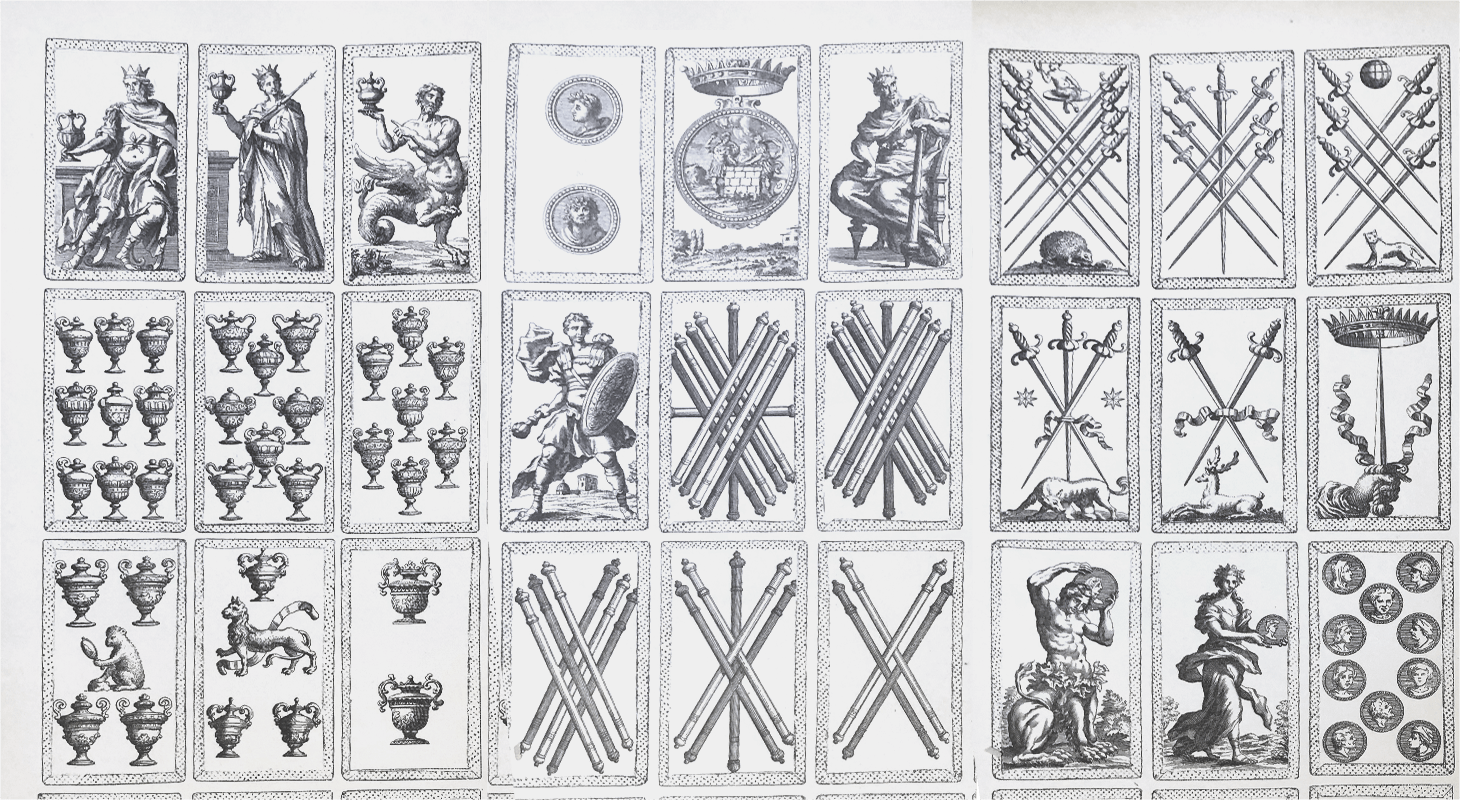 New: The Smithsonian just uploaded a massive digital collection. In it, I found some beautiful playing cards, including originals of the prints above. Check out some of the Minchiate cards below, as well as many other beautiful cards from the collection.

Similarly, Spain had chalices, swords, coins and clubs as their common suits. 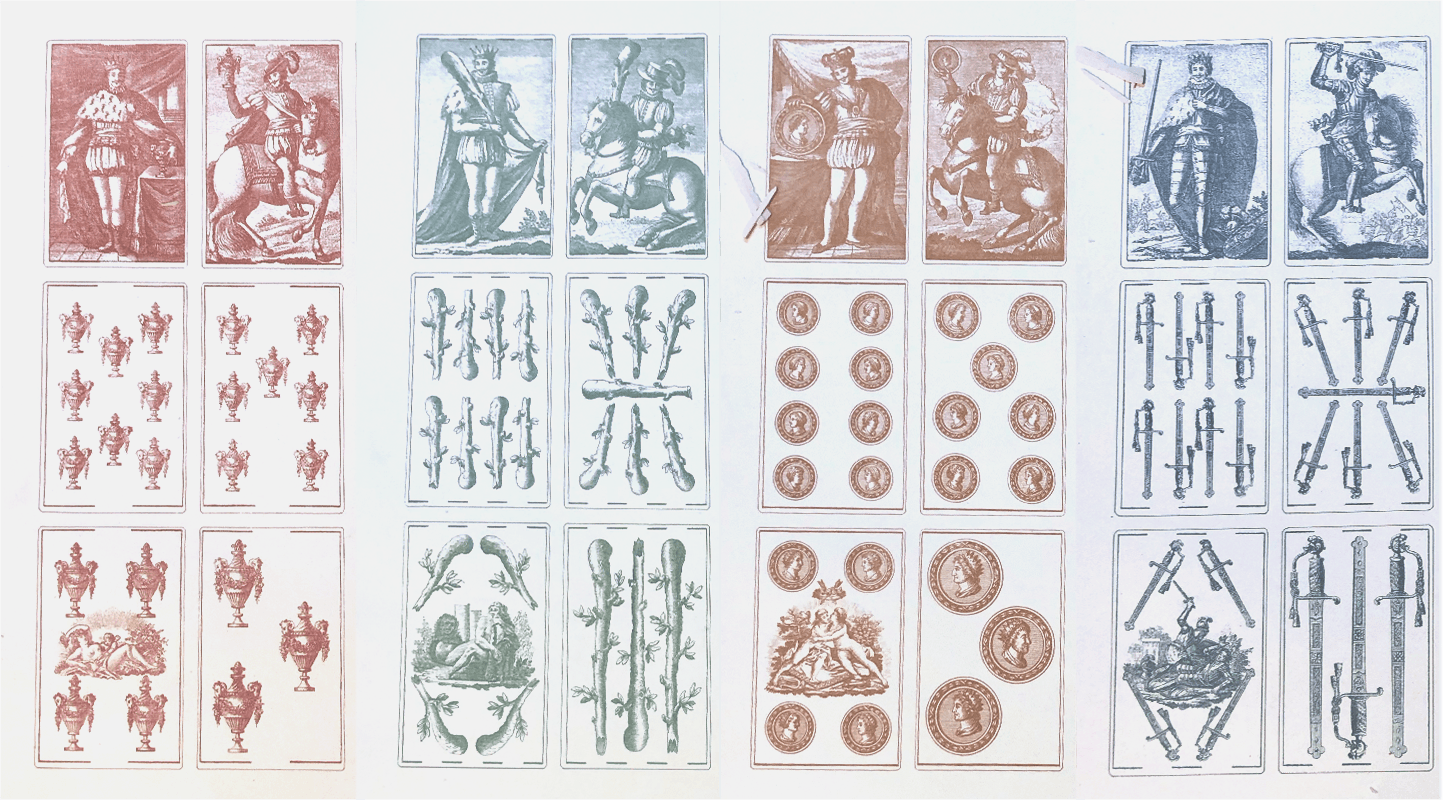 German suits were different - cards were represented by hearts, bells, leaves, and acorns. German cards influenced decks across Central and East Europe, from Switzerland to Russia. 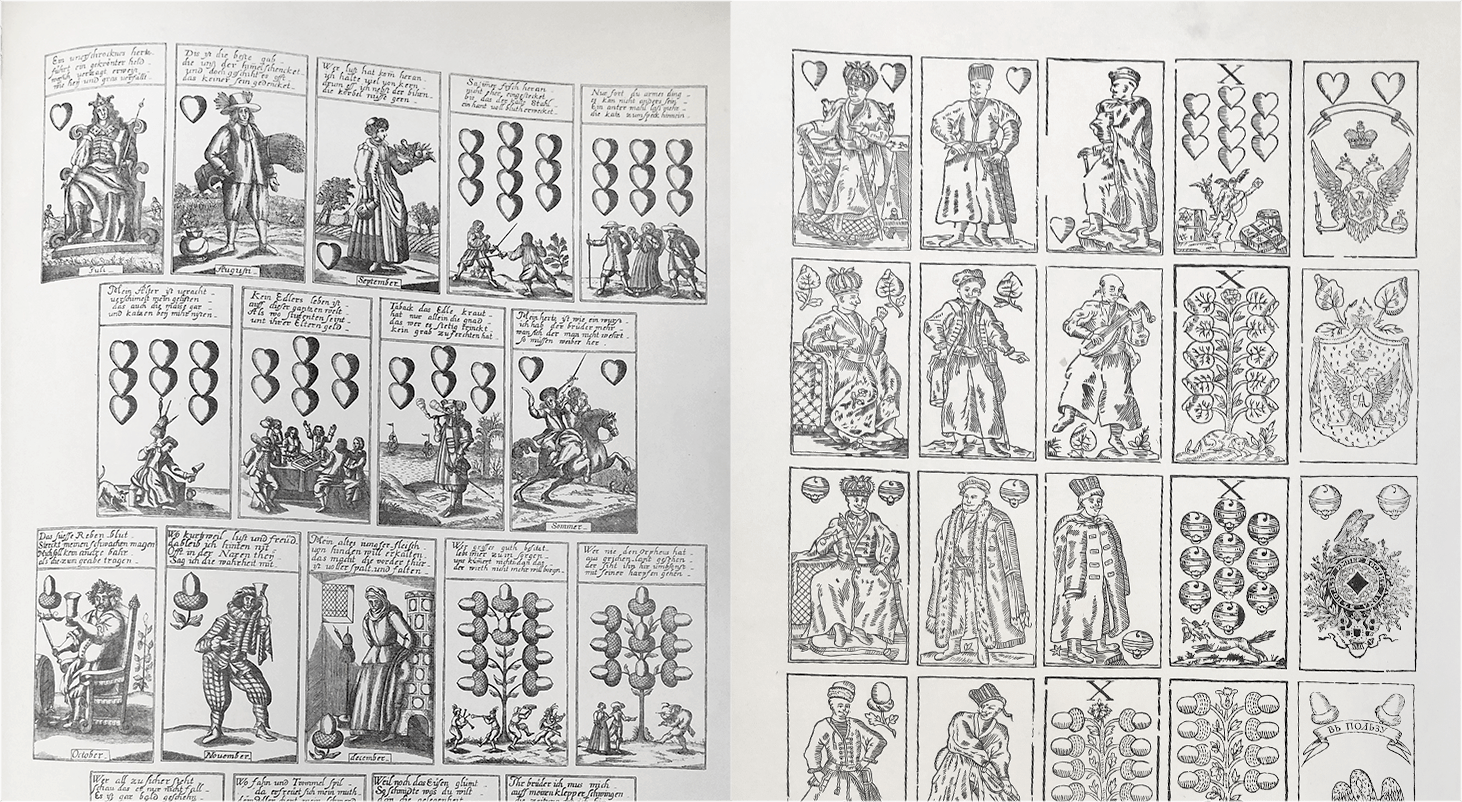 In France, card decks were suited with coeurs, piques, trèfles, carreaux - or hearts, spades, clubs, and diamonds. These French suits influenced a number of countries across Europe. 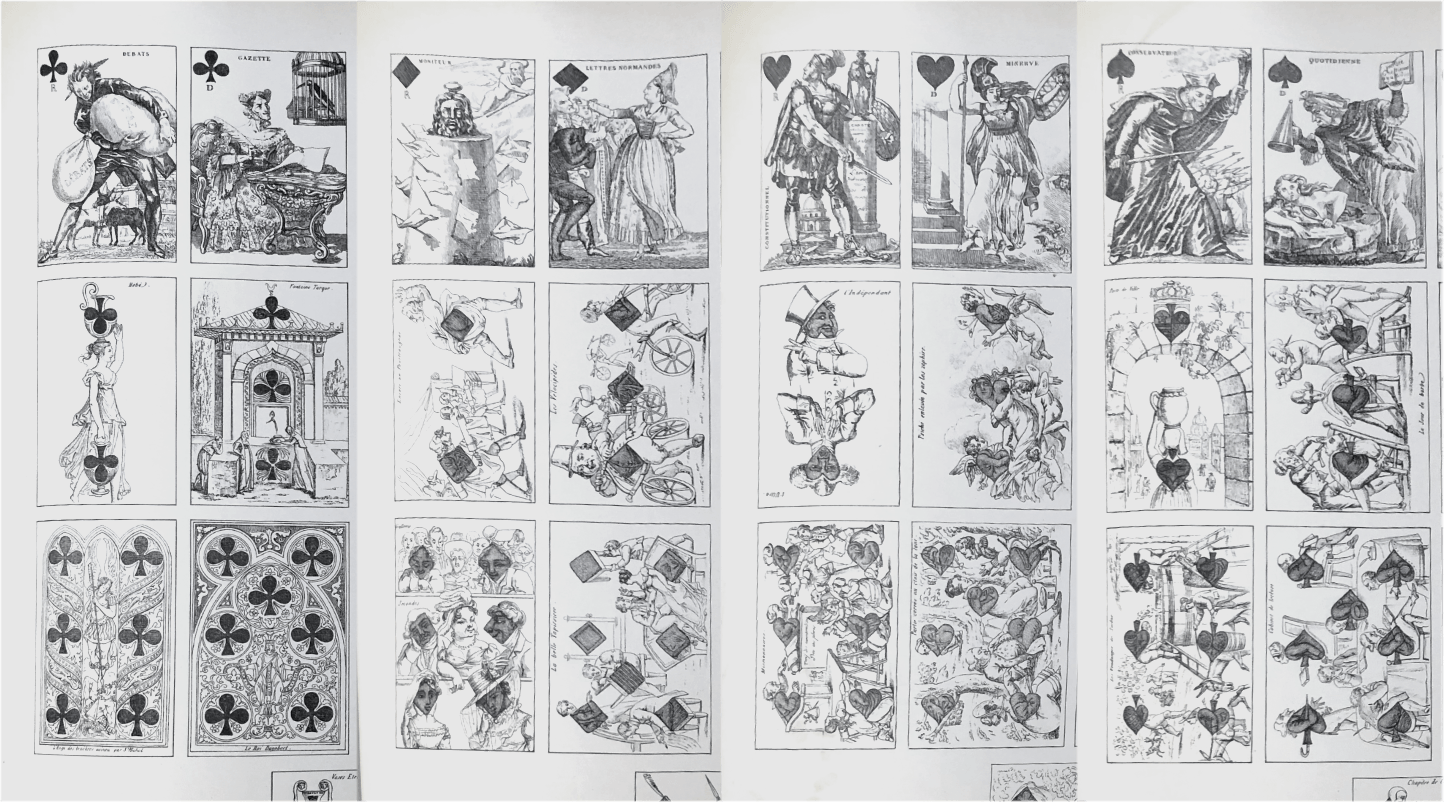 Undoubtedly, the French suit style gained an enormous advantage when they were brought to England in the 1600s. As England became a naval power over the subsequent centuries, it was these decks and these suits that became standardized in the US and around the world. 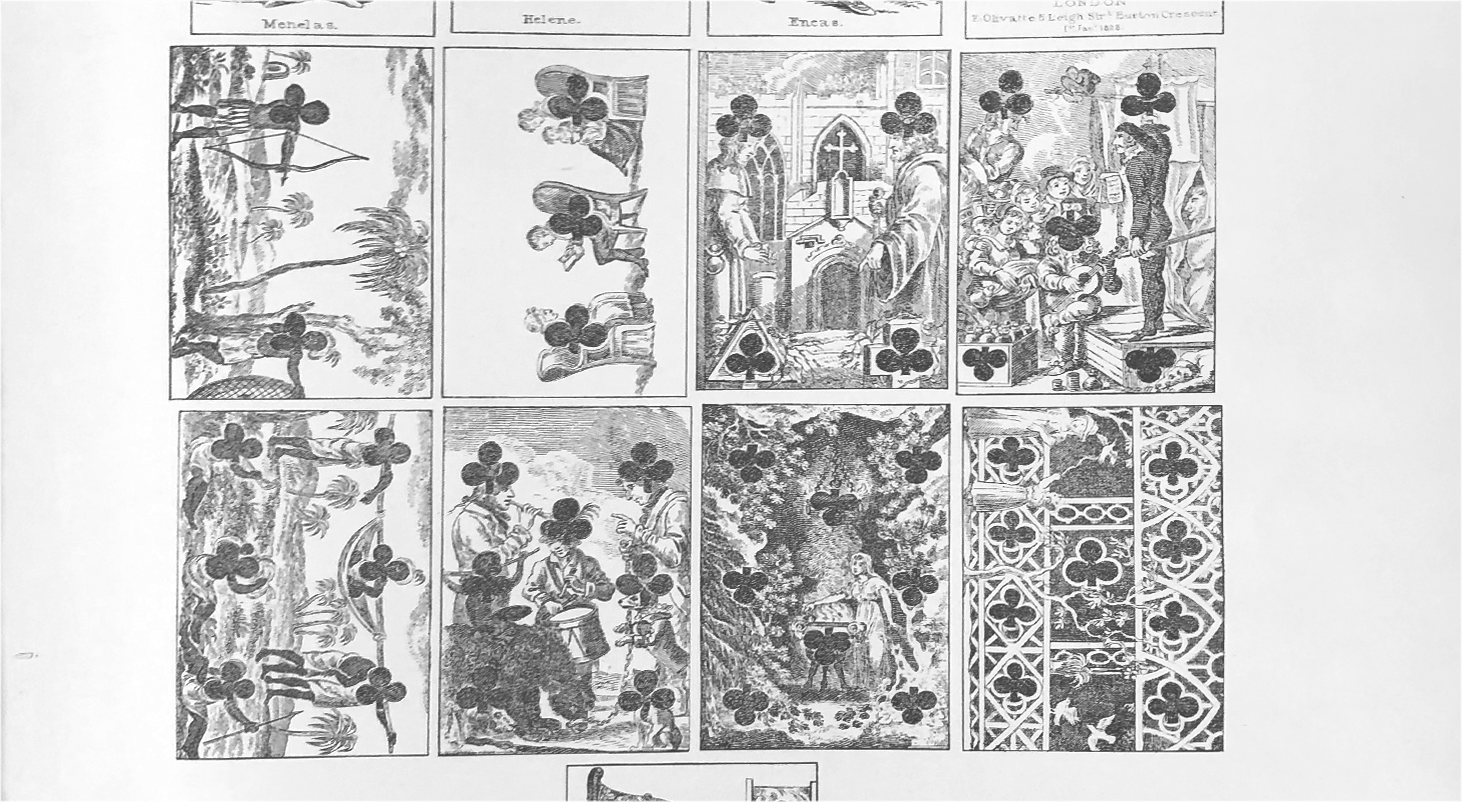 Playing cards in America came along with European settlers, representing the countries they belonged to. Evidence shows that Spanish cards made the earliest appearance in the US, but Dutch and English cards appeared soon after. In 1757, the first American playing card company, the Ford Playing Card Manufactury, was founded. American cards adopted French suits in their design, and over time popularized innovations like rounded corners (although first appeared in England) and satin finishes.

But perhaps the biggest contribution American manufacturers made to the modern card deck were the two jokers. Jokers were originally made to be the trump cards in the game of Euchre, and were created during the Civil War. In 1867, the Russell, Morgan & Co. playing card company was formed, which soon became the United States Playing Card Company. Today, the USPCC owns popular brands like Bicycle, Aviator, Bee, and Hoyle. 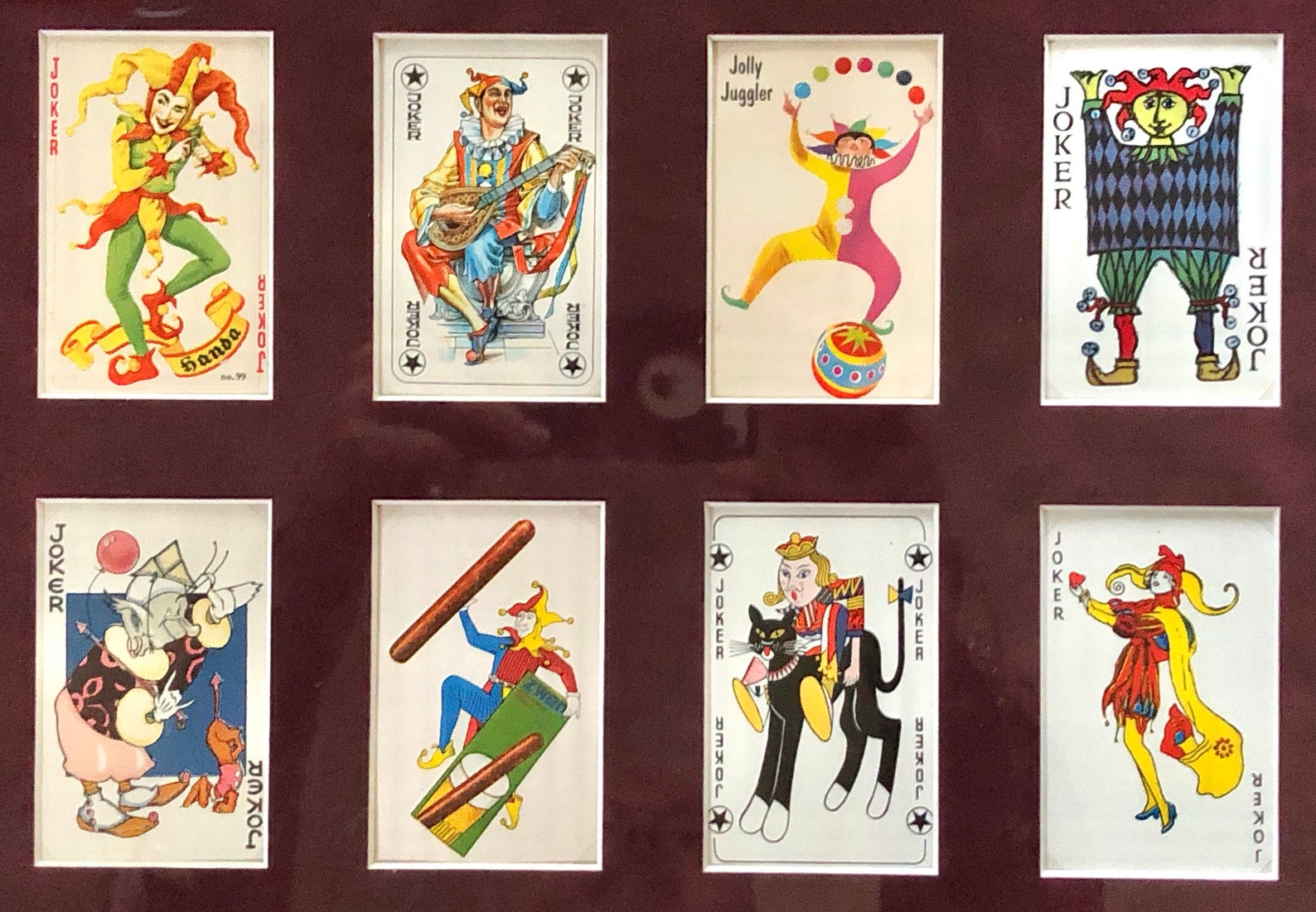 Today, the common deck known worldwide consists of 52 cards across 4 French suits, plus the two Jokers.

Today you can find these cards in the most common games you play, like Solitaire, Rummy, and War.

Catherine Perry Hargrave. A History of Playing Cards and a Bibliography of Cards and Gaming. Mineola (N.Y.), Dover Publications, 2004.