Backgammon is one of the oldest board games in the world. The exact origin of the game is unknown, but some historians believe it may have originated in Mesopotamia.

Today, it is widely popular in the Eastern Mediterranean and played in places like Egypt, Cyprus, Greece, Turkey, Lebanon, Palestine, and more.  It shares many similarities with other dice games, including Greek kottabos, but differs from other games in that you place the pieces on the board instead of throwing them into a pot or bowl.

Backgammon is great entertainment but also has numerous cognitive and mental health benefits. Like other board games such as chess and checkers, Backgammon requires a good measure of strategy and skill, but you also need some good old-fashioned luck to help you out.

It's also easy for beginner players to learn. It only takes a few minutes to understand everything you need to begin playing, even a single game.

What You Need To Know Before Playing

Backgammon is played by two people sitting opposite each other. It requires a backgammon set that includes: a backgammon board, 30 checkers, four dice, a dice cup (to shake the dice), and a doubling cube. In the next section, we’ll explain the key terms of Backgammon.

If you're new to Backgammon, it helps to know the essential parts of the backgammon set and some key terminology. Here's a quick breakdown:

What is the Goal of Backgammon?

The game's objective is to be the first player to remove all your checkers from the board. Reaching this point signals the end of the game. Checkers can only be removed from the player’s home board; to reach the home board, checkers must be moved in a counter-clockwise direction until all of them are on the home board.

How To Play Backgammon

The Backgammon board is divided into the home board and the outer board, separated by a ridge called the bar. The long triangular shapes on the board are called points. The points are numbered from 1-24, with points 1-6 on the home board.

However, note that the numbers are different for each player; for example, point 1 for one player will be point 24 for the other player). Players sit opposite each other with their respective home boards on the right and outer boards on the left.

Setting Up the Board

Each player places their fifteen checkers on the board before the game begins. For the starting position, they should place two checkers on their 24 point, three on their 8 point, five on their 13 point, and five more on their 6 point. Since the numbers are different for each player, this will result in a mirror image set up as in the picture below. 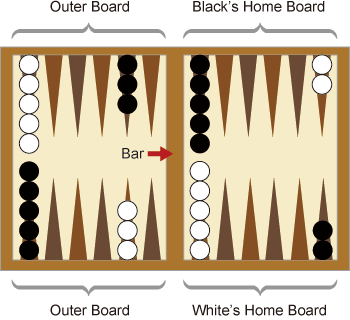 Roll the Dice to See Who Moves First

To decide who makes the first move, each player rolls one dice. The person who rolls the highest number plays first. If both players roll the same number, they should roll again until one player rolls a higher number.

Rolling Your Dice and Moving Checkers to Open Points

Using a tumbler, roll a pair of dice (must be six-sided) per turn. The two numbers rolled represent the distance that you can move the checkers. For example, if you roll a 4 and a 6, you can move one checker four spaces and another checker six spaces. The same checker can be moved twice, so with a roll of 4 and 6, you could move a single checker for a total of 10 spaces.

A “blot” is a point that has only a single checker of either color on it. If a checker of the opposing color is placed on this point, the blot is “hit,” and the checker must be moved to the bar (the ridge in the middle of the board).

Checkers on the bar must re-enter the game via the opposing player’s home board, and a player may not move any other checkers until those on the bar have been moved back onto the board. Checkers re-enter the game according to the dice roll; e.g. if a player rolls a 1, they can move a checker from the bar onto the 24 point, and with a roll of 4, you can move it to the 21 point.

If you don’t roll an open number, then you lose your turn and need to try again on the next turn.

When a player has all fifteen of his checkers on their home board, they may start bearing off (or removing) checkers. A player bears a checker off by rolling a number that matches the point that has a checker on it.

Another example is if a player rolls a 3 and a 6, but there are no checkers on the 6 point, you can use the 6 to remove a checker from the next highest point. The first player to bear off all 15 checkers wins the game!

Backgammon games are usually quite fast, and so it’s often played in a series of games (with the winner the first to reach a certain number of points). Each game is usually worth 1 point; however, during the game, a player may propose doubling the current stakes (this must be done at the start of their turn before rolling the dice).

The other player can either accept the offer (in which case the game continues for double the points) or refuse. If they refuse, the game ends, and the winner gets the original number of points.

Doubling is tracked with the “doubling cube” placed in the center of the bar; once a player accepts a double, they become the owner of the cube, and only they can propose another double. There is no upper limit to the number of doubles allowed per game, so some games may be worth up to 64 points!

When a player bears off all 15 checkers, they win the game and score points based on how many doublings have been agreed. However, there are some situations where more points are awarded. If a player has borne off all their checkers, but their opponent hasn’t borne off any, this is called a “gammon” and counts for double points. If an opponent hasn’t borne off any checkers and still has checkers either on the bar or in the winner’s home board, this is a “backgammon” and counts for triple points.

What Other Rules May Come Into Play?

Here are some optional rules of Backgammon you might want to explore:

The Automatic Doubles rule is a variation of Backgammon in which the stakes are doubled if identical numbers are thrown on the first roll. In this case, the doubling cube is turned to 2 but left in the middle for either player to use. Automatic doubling is usually limited to once per game. .

With this rule, when a player agrees to double the stakes, they are immediately allowed to re-double the stakes while keeping possession of the doubling cube. As with other doubles, the other play can reject the beaver offer.

The Jacoby Rule states that gammons and backgammons score single points (rather than the usual double or triple) if neither player has offered a double during the game. This is to encourage players to offer a double rather than playing on for the gammon or backgammon.

There are some irregularities in Backgammon, with rules to determine what happens if these occur.

Backgammon is a simple game to learn but is strategically very complex. Here are a few pointers on its strategy to get you started, which you’re bound to pick up more as you become more experienced!

Avoid blots. A blot is when you have only one checker on a point. This is vulnerable to attack; if your opponent puts a checker on this point, your checker will move to the bar, and you will need to invest many rolls to get it back to where it was. Try and avoid leaving blots for your opponent to target by having at least two checkers on a point.

Target your opponent’s blots. Likewise, try and target any blots your opponent has. This will slow them down and help you advance.

Avoid big stacks. There is no limit to how many checkers you can place on a single point. However, it’s better to spread your checkers out rather than building one giant stack, as spread out checkers will be better at stopping your opponent from advancing.

Be careful with offering and accepting doubles. Offering doubles can be tempting, as you can score double points. But remember that if you lose, your opponent will get the points. So only offer doubles if you have a healthy advantage. Furthermore, feel free to reject a double and end the game if you are clearly headed toward becoming the losing player; it’s better to lose 1 point than 2!

No, you must make a move if you are able to. Sometimes this may mean making a move that you don’t like.

3. Why did the Catholic Church ban the game?

The Catholic Church once banned the game of Backgammon because they believed it to be a game of chance, and therefore a sinful activity. However, although some chance is involved, Backgammon is primarily a game of skill.