5 Great Solitaire Games You Must Try

Solitaire card games are a popular form of entertainment. However, with over 500 variations of solitaire games, it can be overwhelming to choose which one to play. Here are 5 popular ones you should check out.

Stock deals cards one by one, after which they go to waste. Be careful, as you can only pass through the deck once. The last card in waste can be placed on the foundation or the tableau.

Cards on the tableau can be stacked in the descending order, but only if they are of the opposite color. These groups of cards can be moved to different columns. If there are no groups, you can only move a single card. Once empty, columns can be filled with Kings.

Your goal is to move all the cards to the 8 foundations above the tableau. Cards have to be in order starting from Ace, and of the same suit. Once you place the card on the foundation, it cannot be moved back to the tableau. When you reach the King you can stack another Ace on and continue building.

Forty Thieves is a well-known and challenging solitaire card game that’s played with 2 full decks. Its rules are very similar to the Thieves of Egypt.

Immediately, you will notice 10 rows of 4 cards and 8 foundation piles. Your goal is to move every card into these piles, starting from Ace up to the King of the same suit.

To start, pair cards one by one in descending order before moving them to the foundation pile. Unlike Thieves of Egypt, stacked cards also have to be of the same suit.

Freecell is very appealing to solitaire players, as there are few unsolvable games. As with the games above, your goal is to build foundation piles (4 instead of 8) of the same suit in ascending order. 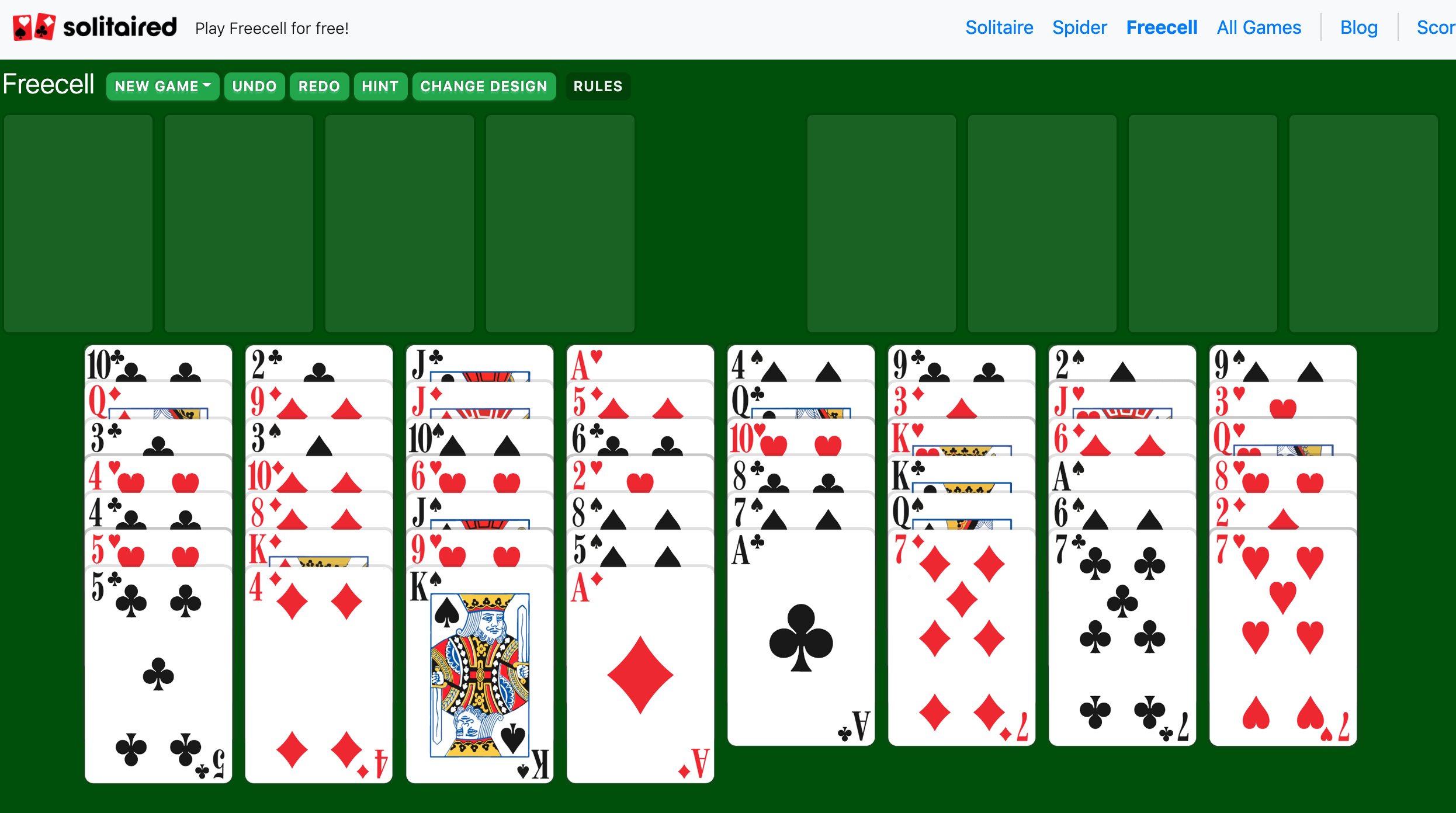 A card can be built on another if it’s of lower rank and different color. You can move single cards to one of the 4 cells on the left. If you want to move a pile of cards, you can only move them through the free cells.

Eight Off is a good choice for beginners since there is no stock. It uses a single deck, with 48 cards separated in 8 tableau rows, and 4 in the cell above. 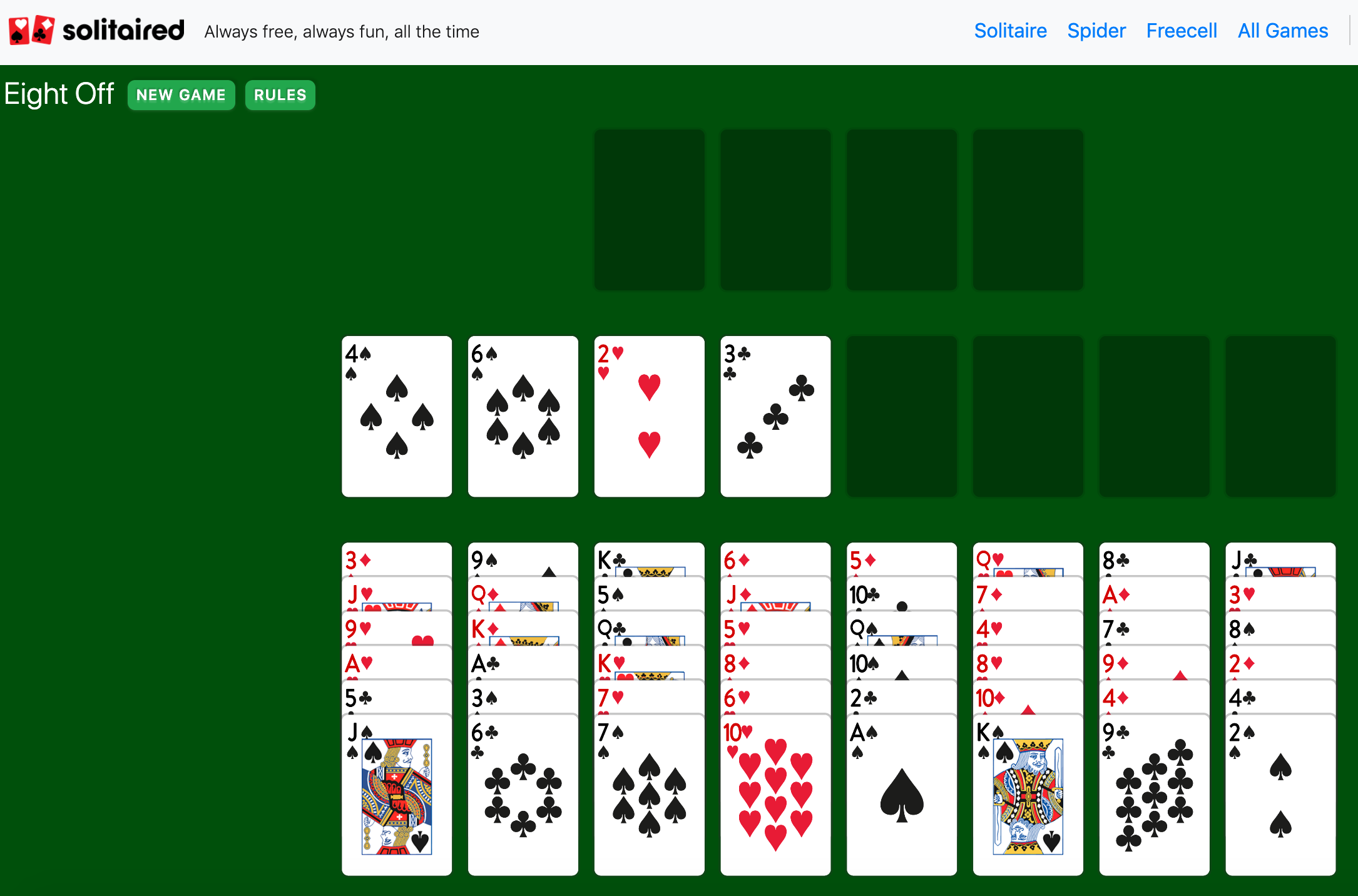 Your goal is to build the foundations from Ace to King for each suit. Foundation is built by the cards that are one rank higher (2 to 3, etc.). Cards in tableau piles are built in the descending order and have to be of the same suit. You can only move one card at a time. A single card can be placed in each cell and back to tableau if needed. Empty space on the tableau can be filled with King.

Lastly, we have one of the hardest solitaire card games. Scorpion is played with a single deck of cards, spread in 7 tableau columns and small stock. 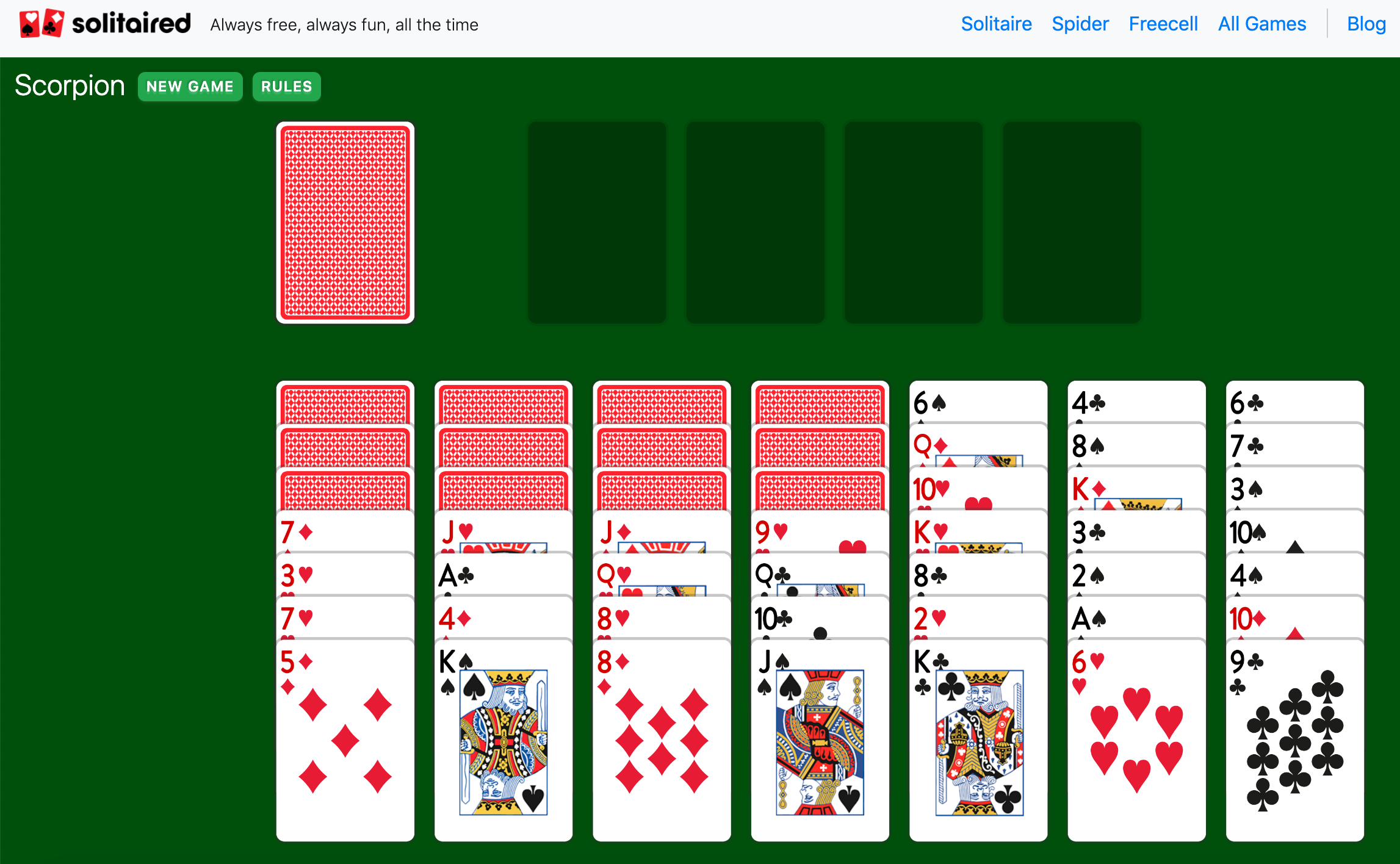 The goal is to build a whole stack of the same suit on the tableau. The stack also has to be built in reverse order, starting from King down to Ace. Once you complete it, the suit is automatically added to the foundation pile, similar to Spider.

Scorpion lets you move multiple cards simultaneously, as long as the top card you are moving is one rank below and of the same suit as one in the other column.

Simply go back and forth to match and create a full suit combination. When you get an empty spot on the tableau, you can fill it exclusively with Kings.